Delta employees detail a pattern of anti-Semitic abuse at airline 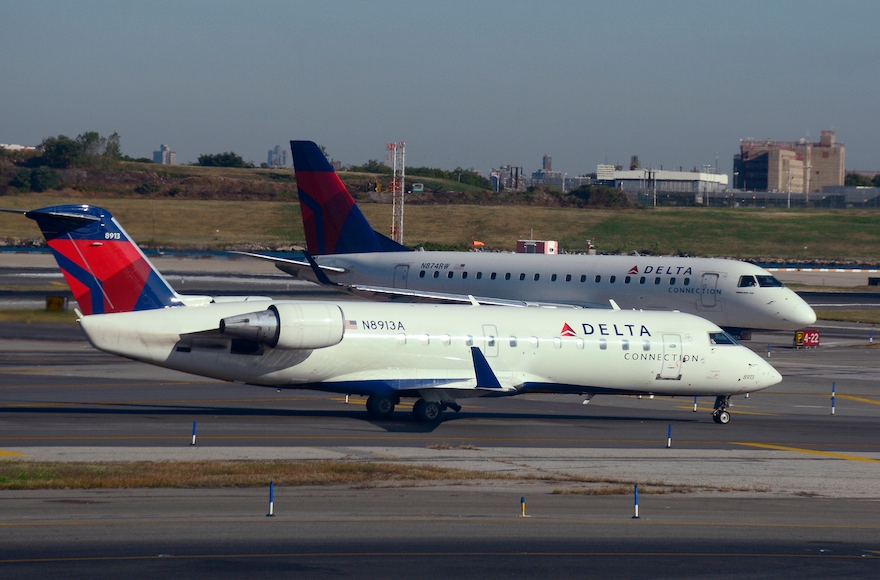 NEW YORK (JTA) — It wasn’t long after Nahum Amir began working for Delta Airlines as a mechanic that he says his manager started calling him “the Jewish guy.” Then Amir says the manager accused him and other Jews of “killing kids in Gaza.”

During the same period, Yaron Gilinsky was working as a Delta flight attendant on flights from New York to Tel Aviv. Except, he says, his non-Jewish co-workers would call it “Hell Aviv.” Gilinsky remembers some, including managers, making fun of haredi Orthodox Jews’ beards and sidecurls. One non-Jewish fellow attendant called them “ugly Jews.”

“At some point, it makes me feel ashamed and it makes me feel this person doesn’t respect me,” Gilinsky, 38, told JTA about his co-workers’ comments. “I was brought into this company because I speak Hebrew. I was brought into this company to take care of the clients that support that flight, and here this person is talking very derogatorily and putting down my faith, my people, everything that I grew up on.”

Amir, an Israeli-American, and Gilinsky, who was born in Israel and lives in the United States, are each separately suing Delta in federal court for violating the Civil Rights Act, which prohibits discrimination based on ethnicity. Gilinsky is in the process of formally joining a suit filed last week by four other Delta employees who also allege anti-Semitic and anti-Israeli discrimination. Amir’s suit was filed Monday evening.

“I have been subjected to a hostile and threatening environment based on my race and ethnicity,” Amir stated in a signed affidavit obtained by JTA.

Both suits were filed by Philadelphia lawyer Brian Mildenberg.

In a Jan. 3 statement, Delta says it “strongly condemns the allegations of discrimination described in this suit and will defend itself vigorously against them. As a global airline that brings people across the world together every day, Delta values diversity in all aspects of its business and has zero tolerance for discrimination.”

After six years of hearing anti-Semitic comments, Gilinsky was fired in September because, he says, he made a Jewish friend his travel companion. Flight attendants are allowed to designate a friend or family member as their travel companion, which allows the companion to fly standby at a reduced rate.

Gilinsky’s travel companion is a friend he had met on a flight to Israel in 2013. Although they live in different states — Gilinsky in California, the friend in New York — they stayed in touch and met up in Israel. But Gilinsky says that Delta management, after questioning him about his friend, suspended him without pay and fired him two weeks later.

“Our relationship had been very good, and we had good communication with each other,” he told JTA. “Almost every flight attendant I know has given their pass privileges to someone. It’s part of our benefits.”

Gilinsky is set to join other plaintiffs, some non-Jewish, who also complain that Delta suspended or fired them because they shared their travel benefits with Jews and Israelis. One plaintiff, Cynthia Fukelman, alleges that Delta fired her because she was an Israeli Jew. The lawsuit says Delta employees derided Jews for praying in-flight and requesting kosher food.

“Delta has encouraged and maintained an anti-Jewish, Hebrew and ethnic Israeli attitude among management,” the lawsuit says, adding that Delta managers “operate under an express assumption that ethnic Jews and Israelis, as employees and passengers, cannot be trusted, are aggressive and inappropriate, and engage in what are deemed to be ‘strange’ behaviors.”

That Delta flight attendants would be anti-Semitic is surprising, said Paula Kraft, the managing partner of the DaVinci Inflight Training Institute, which trains flight staff. Kraft said Delta takes particular care to train its crews in how to handle kosher food and the sensitivities involved in keeping kosher.

“Delta has good, specific and detailed training on kosher [food] for the Jewish passengers,” Kraft said, adding that the attendants have “more understanding of why someone might demand that they have plastic utensils or why they’re not going to eat off of the aircraft’s china.”

Amir won an award for his performance in 2014, and still works at Delta. He has complained to human resources about the anti-Semitic harassment. But he says management handled the incident inappropriately, asking Amir to recount the story in front of Narine, his manager, and suggest a punishment. He says Delta then refused to reprimand Narine for his statements, instead suggesting that Amir switch terminals.

After a six-month break, Amir says Narine resumed the anti-Semitic slurs, suggesting that haredi men’s facial hair is fake and making derogatory comments about circumcision. Amir also claims Narine has subjected him to unsafe work conditions, in one instance demanding that Amir complete a 20-hour job in 90 minutes. Another time, Narine sent Amir to work alone in icy conditions.

In another instance, Amir claims Narine sent him to clean up and repair an overflowed toilet on a 777 jet, and said, “You have to clean all of the Jewish shit off of these planes.”

“He was joking around and gyrating his hips,” Amir said in the affidavit. “I fixed it because it is my job.”