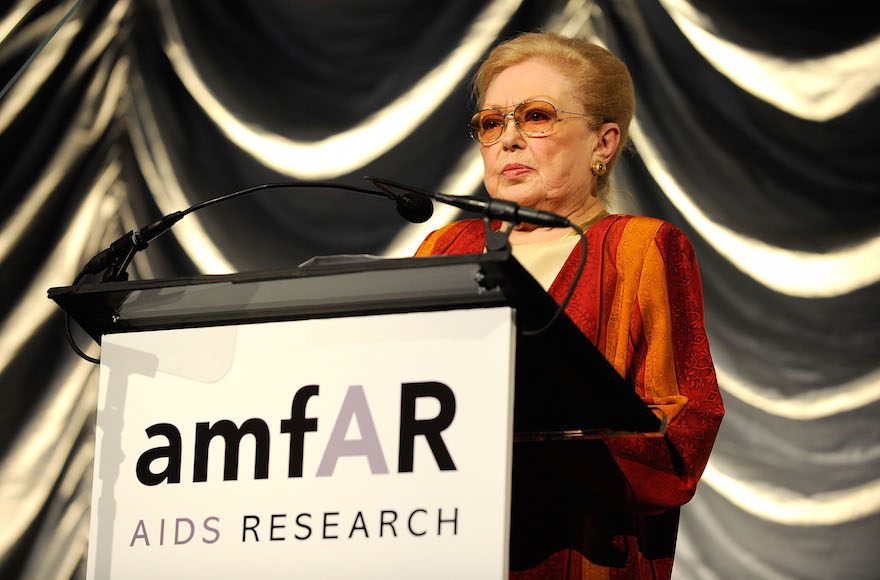 (JTA) — Mathilde Krim, a prominent AIDS researcher who fought the stigma surrounding the disease, has died.

Krim passed away on Monday at the age of 91, people close to her wrote on Facebook.

The researcher founded the AIDS Medical Foundation in 1983, at a time when widespread homophobia hampered people from speaking out about AIDS, a disease that mainly affected gay and bisexual men.

In 1985, the foundation merged with other groups to form amfAR, the Foundation for Aids Research, for which Krim served as founding chairwoman.

Krim, who was active in the civil and gay rights movements, was awarded a Presidential Medal of Freedom in 2000 by President Bill Clinton for her work in AIDS research.

Krim was born in Italy in 1926 to parents who had both Catholic and Protestant relatives but later took an interest in Judaism. Krim converted to Judaism before her 1948 marriage David Danon, an Israeli doctor and military commander whom she met while studying at the University of Geneva. Krim received a doctorate in biology from the university, at a time when few women held such degrees. The couple moved to Israel in 1953, where Krim did research at the Weizmann Institute of Science in Rehovot, but they later divorced.

In 1957, she married Arthur Krim, an American Jewish entertainment lawyer, who served as a trustee of the Weizmann Institute. She relocated to New York where her husband lived and led research at the Sloan-Kettering cancer center. She would meet patients there suffering from a skin cancer associated with AIDS.

“I genuinely believe that we wouldn’t be where we are today without Dr. Krim’s brilliance, determination, and mobilization,” said Tim Horn, the group’s deputy executive director of HIV & HCV Programs. “Beyond her unparalleled contributions to HIV/AIDS research fundraising and awareness, she was an interminable source of strength, support, and wisdom for countless activists over the years.”

Andy Humm, a gay rights activist and co-host of the TV program GAY USA, wrote on Facebook that Krim was a “tireless brilliant, calm, steady voice for healing, research, compassion and justice. Millions owe her their lives.”