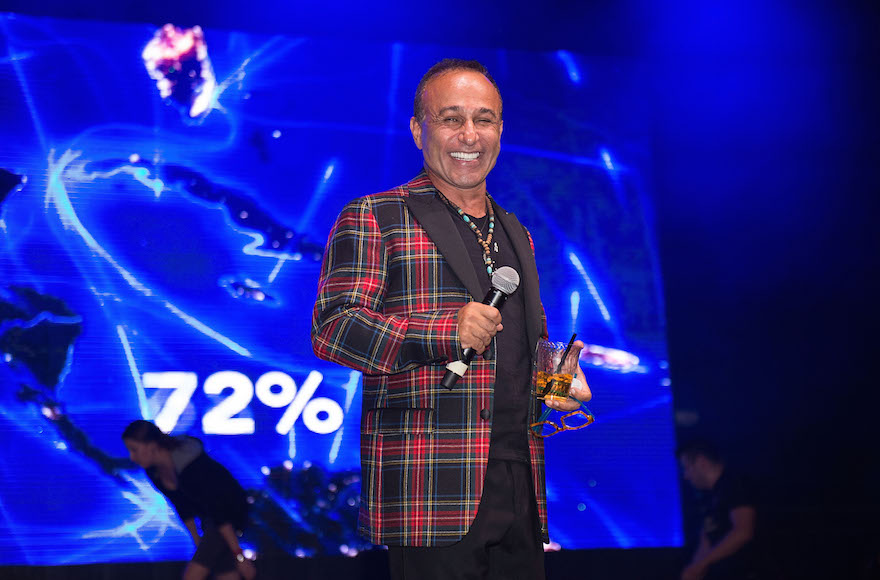 JERSEY CITY, N.J. (JTA) — The side of the building looks like any abandoned factory: weathered brick surrounded by a chain-link fence, with railroad tracks running on the other side of the street.

But step inside this massive complex of nearly 2 million square feet and the postindustrial vibe gives way to a chic, artsy aura.

The first floor of this former tobacco factory features a broad wooden art installation slightly off off the ground. Nearby, art in an exhibit titled “Occupy Mana” criticizes President Donald Trump.

Other floors house an art academy, museums, a dance company, a photography center and studio spaces for artists. Another building on the property contains a foundry for metal sculpture. More than 400 artists work in studio spaces in the complex, which also features apartment buildings that are currently being renovated for occupancy.

The complex, called Mana Contemporary, is the latest project of Moishe Mana, an Israeli immigrant whose moving trucks bearing his first name are a staple on the streets of Manhattan. Now he hopes this sprawling space across the Hudson River, founded in 2011, will revolutionize both the contemporary arts scene and Jersey City, a once-gritty manufacturing town that appears to be on the rebound.

“Art connects between people, and I was very lucky enough to be invested in building the art community, which we’re going to extend,” Mana told JTA. “Investing in the talent, investing in the technologies and the facilities and creating community, this is the future of the world.”

Mana came to New York City in 1983 as a 25-year-old law school dropout, and spent one night that year sleeping on a park bench. Eventually he became a “man with a van,” doing small moving jobs (including a regular gig running towels to a laundry for a gay bathhouse). 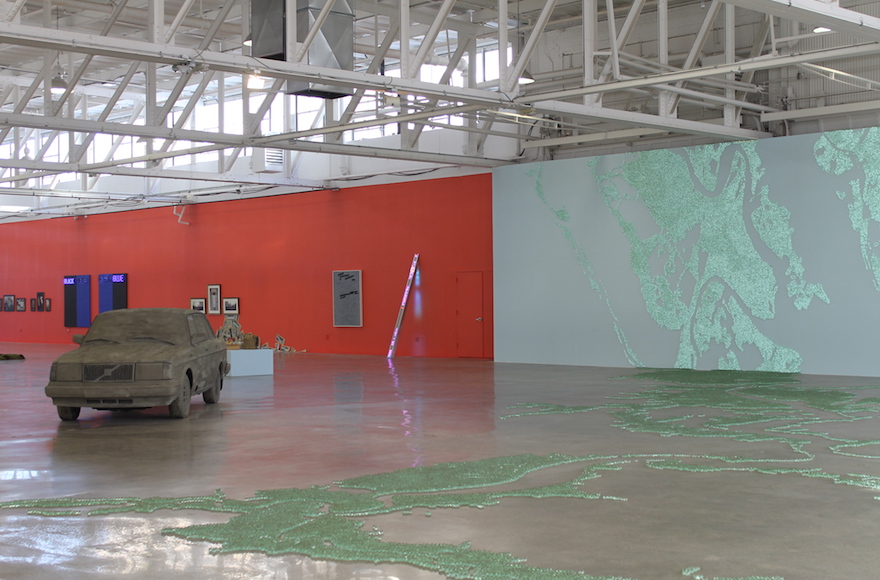 One of the biggest draws of Mana Contemporary, a new contemporary arts complex in Jersey City, is its ample space. (Ben Sales)

Within a few years he had expanded to a fleet of trucks and broken into the heavily unionized moving industry. At one point, he says, he received a call from the infamous mob boss John Gotti, who threatened to kill him for infringing on his business. Mana, unfazed, gave Gotti his address, but the Gambino family don never made good on the threat.

More recently, Mana added storage to his business, including art — a specialty that requires controlling rooms for temperature, humidity and dust. His company now handles some 1200 collections. The art storage business led him to purchase the grounds of abandoned canning and tobacco factories in Jersey City, and dedicate them to contemporary art. He’s also opened similar complexes in Chicago and Miami.

Mana sees the arts complex as a way to lift up Jersey City, which is minutes away from downtown Manhattan by public transit, but with much cheaper real estate. He acknowledges that part of the reason he brought contemporary artists to Jersey City is because he believes an arts scene will lift real estate prices in the area.

But unlike neighborhoods in Brooklyn that have gone from artists’ districts to yuppie hotspots, Mana and his partners have vowed to always reserve space for the arts on his property.

“It’s not a secret that when there is art, it becomes an amazing real estate opportunity,” said Shai Baitel, Mana Contemporary’s senior vice president of strategy. “The difference between us and the rest is we will not allow for the real estate appreciation to push out the artists.”

In addition to introducing Jersey City to the art world, Mana Contemporary hopes to introduce the art world to Jersey City. The complex’s management has dubbed the space “Tribeca West,” named after the hip Manhattan neighborhood, and hopes to draw the New York art scene elite outside the boundaries of the big city.

Yigal Ozeri, an Israeli artist who co-founded Mana Contemporary, said the location gives artists a community of fellow creators, as well as far more space and natural light than they would get in, say, Tribeca.

“A guy gets a studio, he has light, he has galleries, and it’s much cheaper than New York,” Ozeri told JTA. “The pitch is the community. The moment the artist gets here, there’s a symbiosis with young and old artists.”

As in Mana’s other businesses, several Mana Contemporary employees are Israelis, as are many of the artists who rent studios there. But Mana is quick to note that he doesn’t recruit only his co-nationalists. The complex’s Middle East Center for the Arts, for example, brings in artists from far beyond the borders of the Jewish state.

And despite his rags-to-riches story, Mana thinks Israelis who follow his path today will have a harder time than he did. He says the Trump administration, which he has criticized in op-eds, has created an anti-immigrant feeling in the United States that makes it less inviting.

But whether by renting studio space, renovating apartments or loading up moving trucks, Mana says he is doing what he can to help.

“Given the Trump situation and his rhetoric and the American desire to eliminate immigration or reduce immigration, and go into isolationism, it’s becoming much harder for an immigrant to feel welcome in this country,” he said.