Which terrorists are more of a threat, foreign or domestic? The ADL and the Trump administration differ. 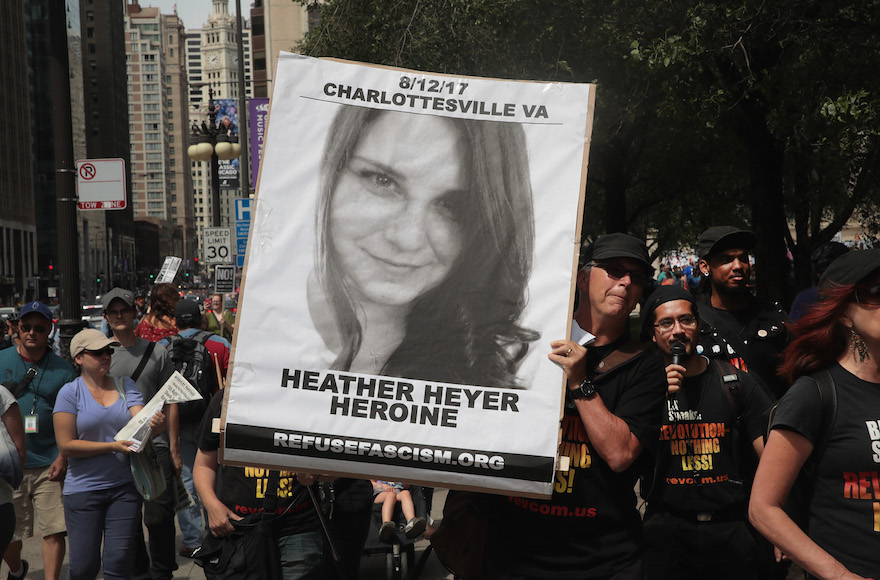 A protestor in Chicago holds a sign commemorating Heather Heyer, who was killed during the Charlottesville protests in August. (Scott Olson/Getty Images)
Advertisement

WASHINGTON (JTA) — Two reports on terrorism, 10 pages each and released within a day of each other, reach markedly different conclusions.

Over a decade, the Anti-Defamation League reports, domestic right-wing extremists carried out 71 percent of extremist-related murders. Over 15 years, according to the Department of Homeland Security, foreign-born culprits committed 73 percent of terrorism-related offenses.

What’s behind the startlingly different conclusions in the reports released this week? There’s an apples and oranges factor of course — starting with the differing time spans — but the Trump administration is also trying to shape the conversation on terrorism to comport with its national security and immigration objectives.

The ADL report, “Murder and Extremism in the United States in 2017,” covers a decade’s worth of extremist violence, from 2007 to 2017, and says that of the 387 deaths in that period, 71 percent came in attacks carried out by right-wing extremists. Homeland Security’s report, “Protecting the Nation From Foreign Terrorist Entry Into the United States,” encompasses from 2001 to 2016 and counts 549 individuals convicted of “international terrorism-related charges” in U.S. federal courts between Sept. 11, 2001, and Dec. 31, 2016. Of those, 402 were foreign-born.

Including the first six years after the 9/11 attacks would presumably weight the count toward the foreign-born, as the Bush administration intensified efforts to track down bad actors connected to al-Qaida, the terrorist group behind the attacks. (We don’t know for sure because Homeland Security does not break down its numbers into incidents or nationalities.)

Most salient, however, is the terminology: The ADL report refers to “extremist related killings.” Homeland Security refers to “international terrorism-related charges.”

Why is the Trump administration making this about international terrorists and not including domestic terrorists?

There are two answers to this question, with a key divider: The election of President Donald Trump.

Domestic terrorists are often right-wing lone wolves who operate outside the structures of a terrorist organization. Tracking them requires community-based policing, conveying to parties who might know a potential attacker — family, friends, colleagues — what the warning signs may be.

International terrorists often answer to groups based overseas, requiring coordination with the array of bodies that deal with foreign policy and national security.

Law enforcement is mindful of the differing prosecution strategies in pursuing domestic as opposed to international terrorists. Thomas Brzozowski, the Justice Department’s counsel for domestic terrorism, last week outlined for the Huffington Post the difference in strategies in each case. A tweet supporting a State Department-designated foreign terrorist group can count as material support and trigger a prosecution. Backing a U.S.-based extremist organization on social media likely falls under First Amendment free speech protections.

The Trump administration perceives the most immediate threat to Americans as being from abroad.

The Homeland Security report fulfills a requirement in an executive order issued by Trump on March 6. It was the second order by Trump seeking to ban travelers from Muslim-majority countries and was issued to withstand the court challenges that felled his original order, on Jan. 27. Deep in the March 6 order are instructions to Homeland Security to essentially back up with data, after the fact, the rationale for barring travelers from six Muslim-majority countries.

The order also appears to favor identifying not only actions but a motive identified among some on the right with the Muslim world: honor killings. It seeks “information regarding the number and types of acts of gender-based violence against women, including so-called ‘honor killings,’ in the United States by foreign nationals.” Researchers see “honor killings” as a cultural, not a religious phenomenon, and have identified non-Muslim cultures where it is practiced. In any case, the final report noted that there is no data breaking down gender-based violence according to whether perpetrators are foreign born or not.

The Trump administration’s emphasis on foreign acts of terrorism is consistent with its de-emphasis of domestic terrorism. Under Trump, Homeland Security has considered (but ultimately decided against) renaming its Countering Violent Extremism program Countering Islamic Extremism. It defunded an Obama-era program, Life After Hate, that helped right-wing extremists detach from radical groups.

A former senior national security adviser to Trump, Sebastian Gorka, has said repeatedly that there is “no such thing” as a lone wolf attacker, suggesting it was an Obama administration construct designed to cover up the role of organized Islamic extremism in advancing terrorism.

Whose numbers add up?

The ADL is painstaking about making sure that a murder was directly related to extremism. It omits from its count the murder of a black student at the University of Maryland in May, noting in the report that while the alleged assailant, who was white, belonged to a Facebook group that attracted racists, not all of its members are racists. It also provides an addendum detailing 34 extremist-related murders in 2017, explaining why in each case the attack was deemed extremist-related. (Breakdowns of previous years appear in previous annual reports.) 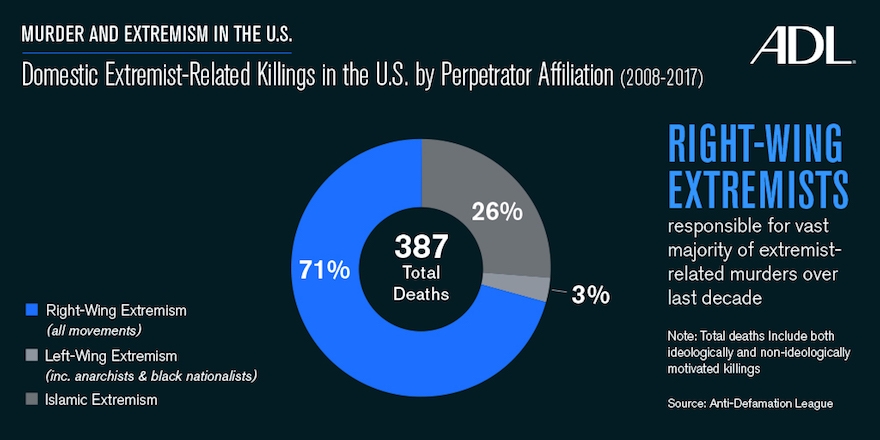 This chart from the Anti-Defamation League report shows that 71 percent of extremist-related deaths from 2007 to 2017 were committed by far-rightists. (ADL)

The Homeland Security report includes details of only eight of the 402 foreign-born cases. Officials briefing reporters on the report said more information would be available in the future.

However, even among the eight there seemed to be anomalies, at least when judged against Trump’s original order. Included are individuals who planned to travel abroad to join terrorist groups like the Islamic State. Nothing, at least in the report, suggested that these individuals planned attacks on U.S. soil.

Ed O’Callaghan, a deputy assistant attorney general, briefing reporters Wednesday on the report, said that those individuals might eventually return to the United States to carry out attacks.

“I think that that makes the American people safer and I know the Trump administration does,” he said.

Additionally, several of those individuals are not from the six Muslim-majority countries designated on the Trump order. Instead, the selections appear designed to bolster changes in immigration policy that Trump embraced following the March executive order. Several arrived in the United States through the visa lottery system, and several were here because they were sponsored by family. Trump wants to put an end to the visa lottery system as well as “chain migration.”

A reporter at the briefing said he had heard that among the 402 were terrorists who had been captured abroad and were brought to the United States for trial — in other words, whose “immigration” was entirely a function of their being brought to justice.

Callaghan acknowledged as much.

“There is undoubtedly, because I’ve been involved in a lot of the cases, a certain number of those foreign-born individuals who have been brought into the United States by extradition or otherwise to face charges,” he said.

What does this all mean for the Jews?

Be alert. Michael Masters, the director of the Secure Community network, the security arm for national Jewish groups, said community protections against either phenomenon — international or domestic terrorists — were essentially the same.

“Recent reports outline the dangers posed by violent extremists — Islamists, white supremacists and neo-Nazi groups, as well as individuals — all of whom continue to pose a threat to the United States,” he told JTA. “The Jewish community must remain vigilant. Our safety and security depends on our ability to share information, undertake training, develop an acute awareness of our surroundings at all times and to report any and all suspicious activity.

“These efforts, when undertaken, allow us to better prepare for and address the threats that our community may encounter, regardless of the ideology that drives those threats.”

The ADL seemed to want to remind the Trump administration that containing foreign terrorism should not come at the expense of combating extremists at home and what its national director calls a “new willingness by racist groups to put themselves front and center on the American public stage.”

“In recent years, much of the public discussion and the federal government’s focus have been on the violent threat posed by extremists inspired by ISIS, while less attention has been paid to the reality of right-wing violence,” Jonathan Greenblatt wrote in an op-ed for The Atlantic on Wednesday. “There’s no doubt that Islamic extremism is a significant threat, but we shouldn’t ignore any forms of extremism — we must tackle them all.”