Woody Allen gets hit with a wave of #MeToo backlash 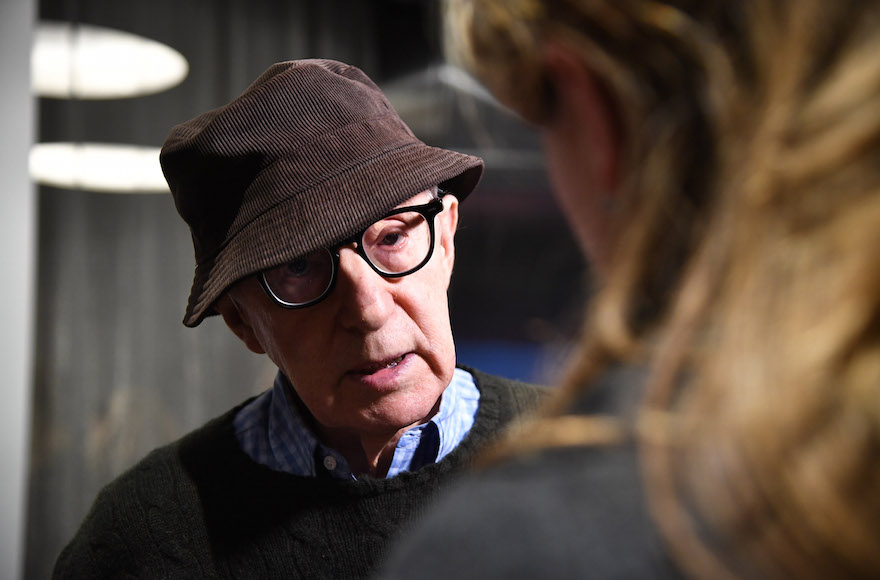 (JTA) — The #MeToo movement is finally catching up with Woody Allen.

His adopted daughter has revived molestation accusations against the acclaimed director and comedian, and a number of stars who have had roles in Allen’s recent films — including Greta Gerwig, Mira Sorvino, Ellen Page, David Krumholtz and Rebecca Hall — have backed away from the filmmaker and expressed regret at having worked with him.

In an interview that appeared on television Thursday, his adopted daughter Dylan Farrow recounted the incident in which she claims Allen molested her in her mother Mia Farrow’s home when she was 7 years old in 1992. She had previously discussed the alleged incident in a New York Times article in 2014, but the TV interview still rocketed around the web.

Dylan Farrow told CBS This Morning that she was inspired after hearing the stories of so many other “brave” individuals who have told of their own assaults by powerful men.

“I felt it was important to add my story to theirs because it’s something I’ve struggled with for a long time,” she said.

Allen has denied that he ever molested his adopted daughter, and an investigation determined that Farrow was coached to make the accusation (something she denies).

Following the airing of the interview, Allen said in a statement that “the Farrow family is cynically using the opportunity afforded by the Time’s Up movement to repeat this discredited allegation.”

It was Allen’s son, Ronan Farrow, who helped get the #MeToo ball rolling late last year through articles in The New Yorker about accusations of sexual abuse by Hollywood producer Harvey Weinstein.

Dylan’s mother, actress Mia Farrow, ended her relationship with Allen in 1992 after learning of his affair with her adopted daughter, Soon-Yi Previn, whom Allen married in 1997. The molestation allegations were revived in 2013, when Dylan was 28.

On Tuesday, the Associated Press reported on the stars who have recently repudiated Allen or donated their earnings from Allen films to organizations that support women who have been sexually abused or marginalized.

Timothée Chalamet – the Jewish actor who stars in the award-winning “Call Me By Your Name” – was the most recent to do so. He donated his earnings from working on the Allen film “A Rainy Day in New York,” which will be released later this year, to Time’s Up, the LGBT Center in New York and RAINN, the anti-sexual violence organization.

Alec Baldwin, who has appeared in three Allen films, came to the director’s defense in a tweet on the Twitter page of his Hilaria and Alec Baldwin Foundation.

Woody Allen was investigated forensically by two states (NY and CT) and no charges were filed. The renunciation of him and his work, no doubt, has some purpose. But it’s unfair and sad to me. I worked w WA 3 times and it was one of the privileges of my career.

Meanwhile, actress Selena Gomez, who stars in “A Rainy Day In New York,” reportedly donated more than the amount she earned in the film to Time’s Up, People magazine reported, but has not disavowed the filmmaker.

Allen came under fire in October, when he said in an interview with the BBC that the “whole Harvey Weinstein thing is very sad for everybody involved. Tragic for the poor women that were involved, sad for Harvey that his life is so messed up.”

Allen also expressed hope that the sexual harassment, sexual assault and rape accusations against Weinstein would not lead to a “witch hunt atmosphere … where every guy in an office who winks at a woman is suddenly having to call a lawyer to defend himself. That’s not right either.”

He later qualified his statement: “When I said I felt sad for Harvey Weinstein, I thought it was clear the meaning was because he is a sad, sick man. I was surprised it was treated differently. Lest there be any ambiguity, this statement clarifies my intention and feelings.”