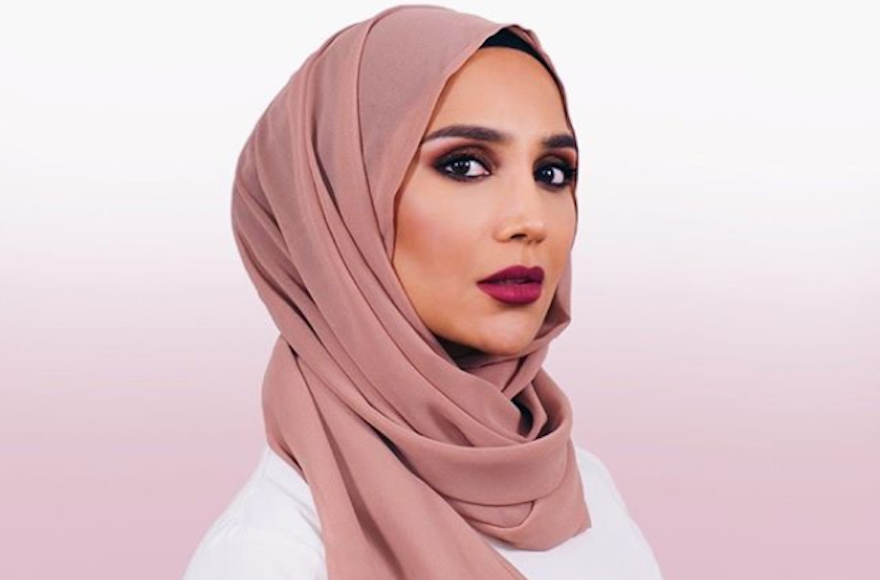 (JTA) — L’Oréal made history last week when it became the first major cosmetics firm to feature a Muslim woman wearing a head covering in a mainstream international ad campaign for hair products.

The signing of Amena Khan, a British blogger on beauty, as the newest face of L’Oréal Paris generated a lot of positive publicity for the French firm, with CNN lauding the company for “breaking barriers” and “becoming more diverse” in an article that also flattered Khan for “empowering women.”

But the response was less enthusiastic in some French Jewish media like JSSNews, where Khan was denounced as “an anti-Semite of the worst kind” for her remarks on Twitter in 2014 calling Israel an “illegal and sinister state.” She also labeled Israel a “child murderer” that Allah will ultimately defeat.

According to the British government’s 2016 definition of anti-Semitism, “claiming that the existence of a State of Israel is a racist endeavor” and “applying double standards by requiring of it [Israel] a behavior not expected or demanded of any other democratic nation” are examples of the phenomenon.

On Monday, Khan said she is stepping down from the L’Oreal Paris Elvive World of Care campaign because “the current conversations surrounding it detract from the positive and inclusive sentiment that it set out to deliver.”

“I deeply regret the content of the tweets I made in 2014, and sincerely apologize for the upset and hurt they have caused,” she wrote on Instagram.

A spokesperson for L’Oreal Paris told the BBC, “We agree with her decision to step down from the campaign.”

“We have recently been made aware of a series of tweets posted in 2014 by Amena Kahn, who was featured in a UK advertising campaign,” the company’s statement to the BBC reads. “We appreciate that Amena has since apologized for the content of these tweets and the offense they have caused.

“L’Oreal Paris is committed to tolerance and respect towards all people.”

It wasn’t the first time that a recruit who was celebrated for a contribution to diversity put L’Oréal on the spot.

Only in September, the brand dropped the British model, DJ and transgender activist Munroe Bergdorf for racist comments against white people just one week after she was hired as part of the brand’s #allworthit campaign intended to promote diversity and appeal to its wide and varied consumer base.

Following last year’s far-right rally in Charlottesville, Virginia, Bergdorf said that “All white people are racist,” adding: “Honestly I don’t have the energy to talk about the racial violence of white people any more. Yes ALL white people … Most of ya’ll don’t even realize or refuse to acknowledge that your existence, privilege and success as a race is built on the backs, blood and death of people of color.”

Nor is the Khan incident the first L’Oréal scandal involving Israel, either. In 1995, the American affiliates of L’Oreal agreed to pay $1.4 million to settle an investigation by the U.S. Department of Commerce looking into complaints that the company was complying with the Arab boycott against the Jewish state.

But to many French Jews, the hiring of Khan recalled a far larger and older scandal involving the firm’s ties to the Nazi occupation of France.

The founder of the L’Oréal cosmetics company, Eugene Schueller, was a Nazi sympathizer who helped bankroll and offered office space in the 1930s to La Cagoule, a violent far-right organization that was virulently anti-Semitic. Its members planned to overthrow the French government and attempted to assassinate Prime Minister Leon Blum, the country’s first Jewish and socialist leader.

After the war, many supporters of the collaborationist Vichy government found employment and refuge at L’Oreal. Schueller’s daughter, Lillianne, married André Bettencourt, a French politician who was a member of La Cagoule.

“What a regression for a company whose director, André Bettencourt, published anti-Semitic articles in the collaborationist weekly The French Soil,” JSSNews wrote.