Israeli illustrator Michel Kichka on ‘fake news,’ why he feels high in NYC and his next graphic novel 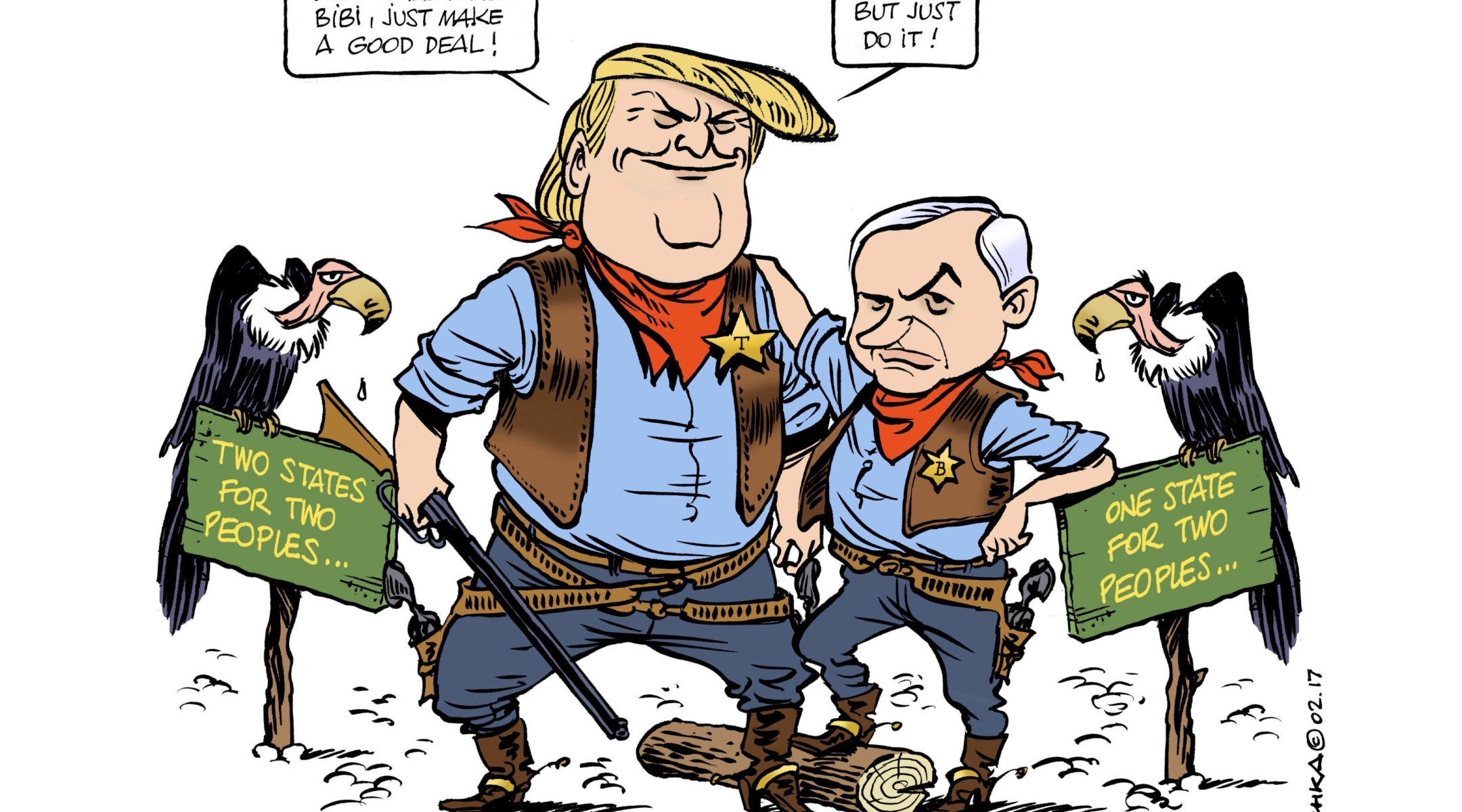 NEW YORK (JTA) — This city bears a special significance to Israeli-Belgian cartoonist Michel Kichka. A visit here in the early 1980s helped launch a career in which he would draw political cartoons that appear in newspapers around the world.

Kichka was living in Israel, having moved there at the age of 19 from his native Belgium, and was drawing sketches of life in the Jewish state. Anyone visiting at the time would have been familiar with his crowded, caricatured depictions of Tel Aviv and Jerusalem that hung on the walls of falafel joints and souvenir shops.

The publisher who discovered his work asked him to make similar sketches of New York. Kichka came here and created a poster that depicts the city in all its Technicolor mess, with mobbed streets, piled-up yellow cabs, street performers, bank robbers and all.

“That was the most complex illustration ever that I did, full of details and full of people,” Kichka, 63, told JTA on Tuesday. 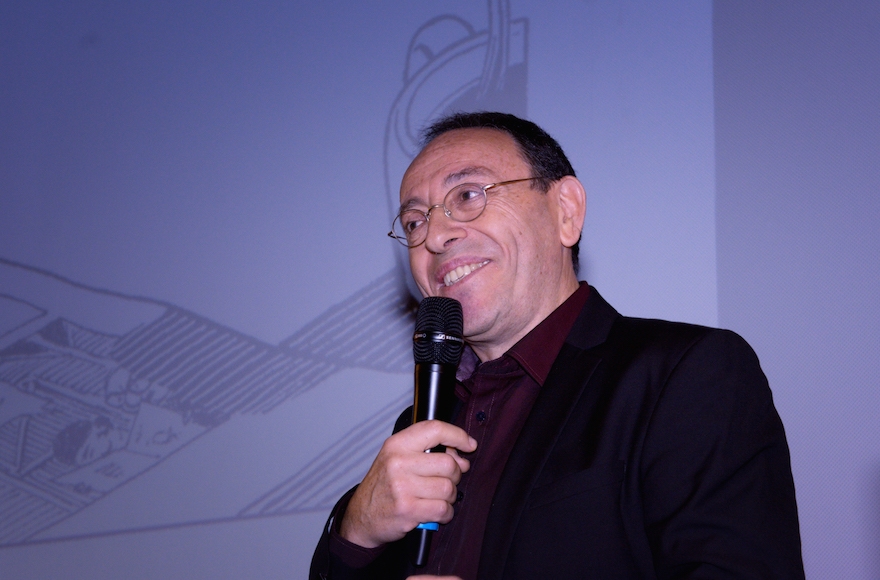 Michel Kichka speaking at a New York gala for Jerusalem’s Bezalel Academy of Art and Design, Jan. 23, 2018. (Courtesy of Bezalel)

Kichka, who was in town to speak at a gala for his alma mater, the Bezalel Academy of Arts and Design in Jerusalem, speaks highly of New York.

But it’s Jerusalem that he calls home. Born in Liege, the son of Holocaust survivors, Kichka visited Israel for the first time as a 16-year-old.

“I had the feeling when I was in the streets of Tel Aviv and Jerusalem that I was walking among my people,” he said. 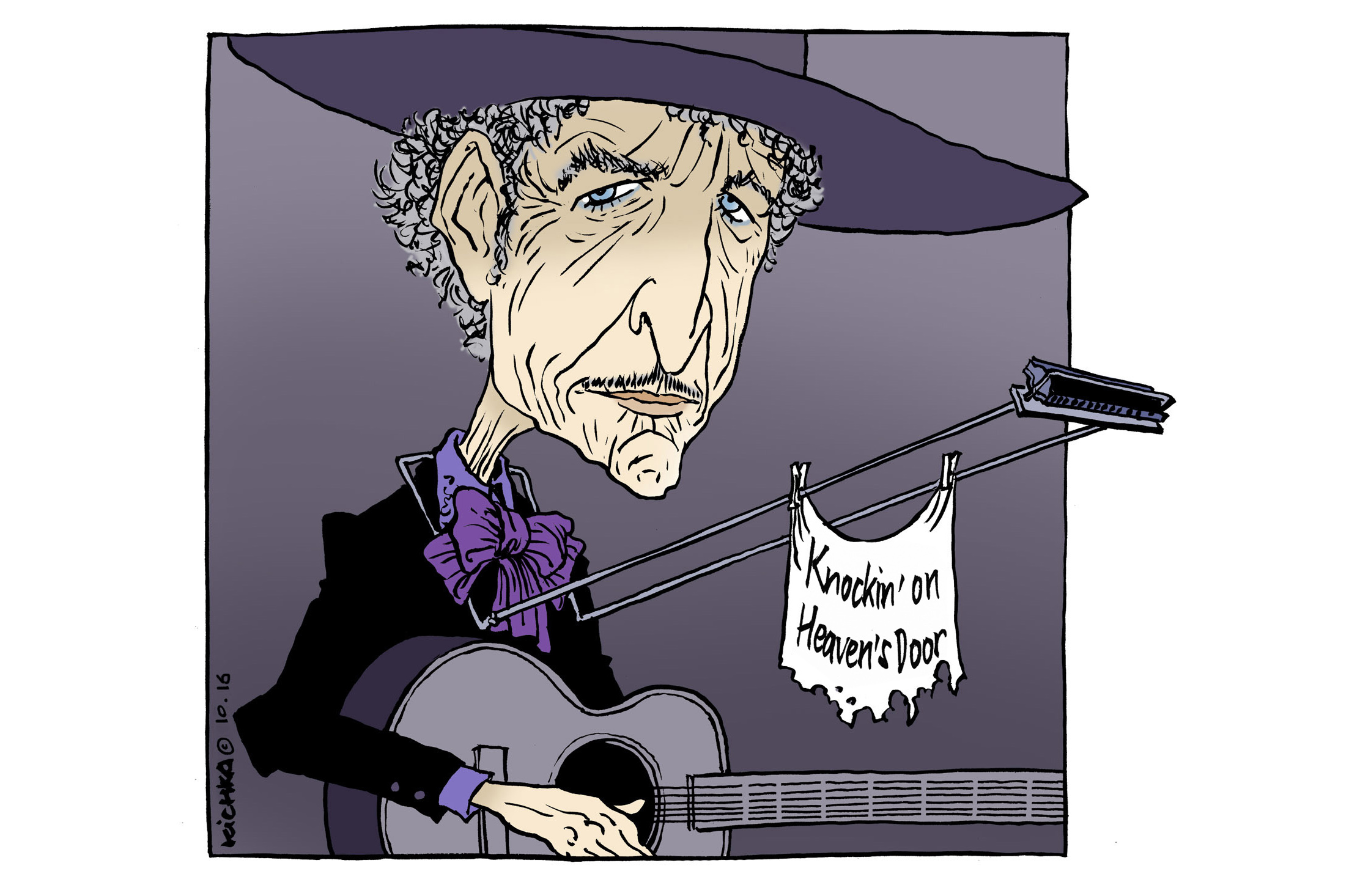 Three years later he decided to quit his architecture studies in Belgium to follow what felt like a calling. He moved to Jerusalem, where he enrolled in a cartoon program at Bezalel. He also met his wife, French-born Olivia Alfandari, with whom he would go on to raise three sons.

After graduating from Bezalel, Kichka found work illustrating articles for newspapers and magazines. In 1983, he visited New York and created the poster that he has since re-created for other cities around the world, including London and Hong Kong.

He later started drawing political cartoons that were translated from Hebrew into English and French and syndicated around the world. In 2008, the Tel Aviv municipality awarded him with the Dosh cartooning award for his work (named for the famed Israeli cartoonist Kariel Gardosh), and in 2011, the French Culture Ministry bestowed on him its Order of Arts and Letters. 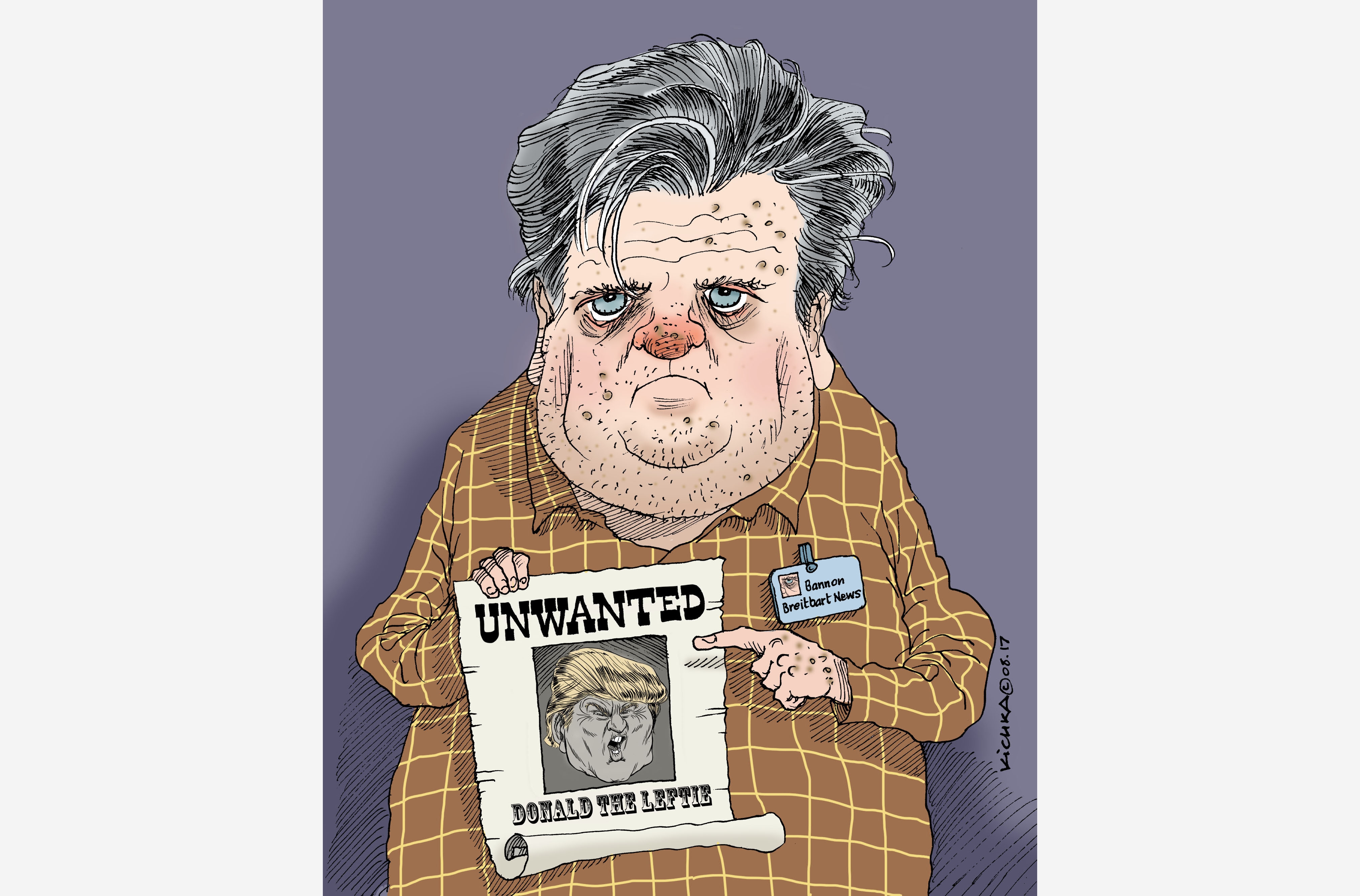 Kichka says that drawing political cartoons today is more challenging than when he started.

That doesn’t stop him from continuing his work.

“If I resign, I can simply drop my pencil and recycle myself in another field, to make a living in something else,” he said. “But I don’t want to resign.” 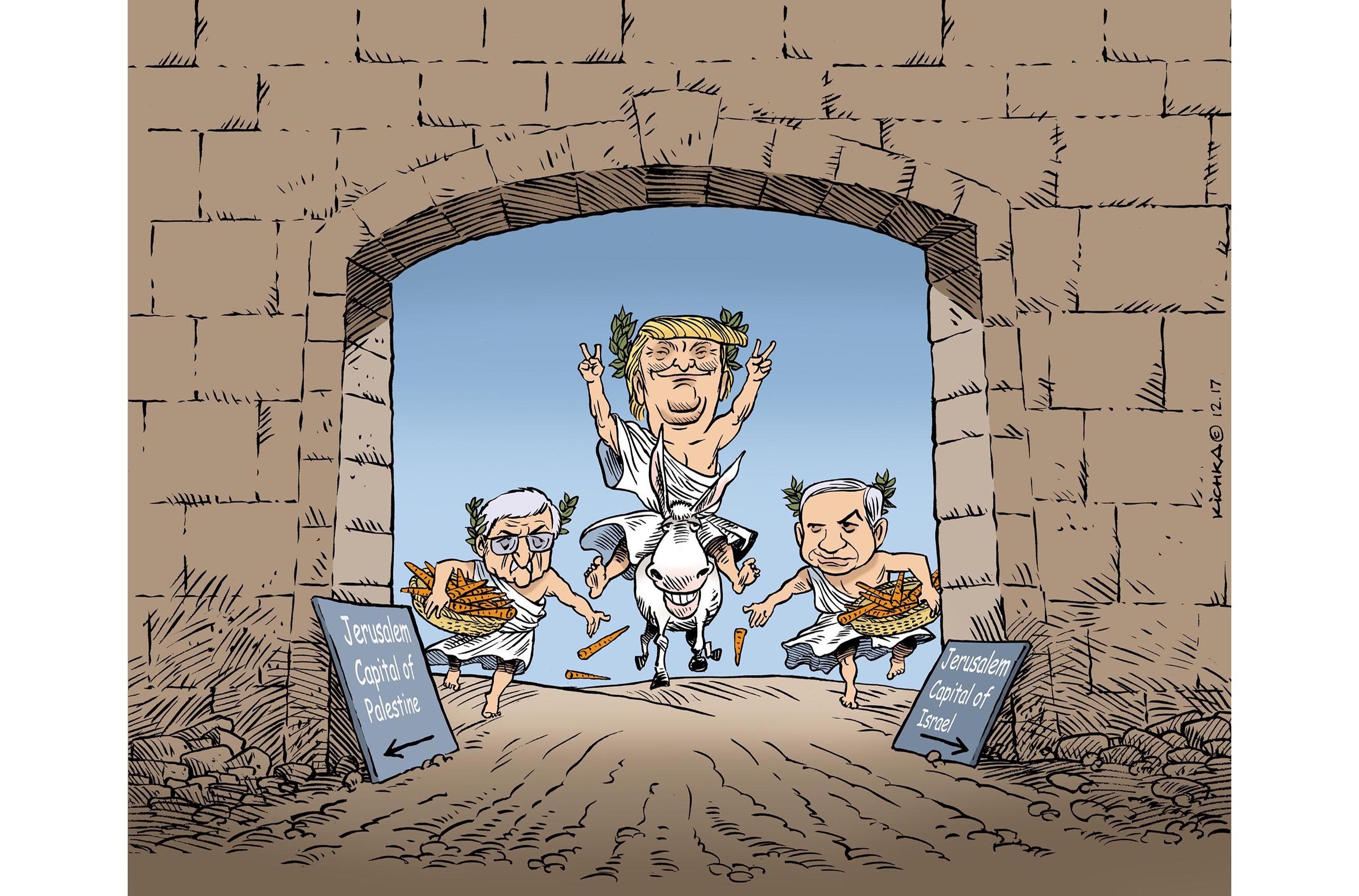 Kichka, who says he belongs to Israel’s “moderate left,” started drawing political cartoons with the backdrop of the first intifada and the assassination of Israeli Prime Minister Yitzhak Rabin.

“I had to deal with terror, I had also to criticize my own government’s politics,” Kichka said, adding that he “had to find a way to say it in a tolerant and respectful way.”

In 2012, Kichka turned his art to a more personal topic: his family’s Holocaust history. When he was growing up, his father rarely spoke of his experiences in Auschwitz or of losing his entire family. His father, who still lives in Belgium, only opened up about his Holocaust past after another tragedy struck: the suicide of Kichka’s younger brother.

Kichka explored his relationship with his father, Henri, in a graphic novel, “Second Generation: The Things I didn’t Tell My Father,” which was published in French in 2012 and later translated into English, Hebrew and other languages.

“I had things to say that I know would not please my father, that could hurt him, but I could not keep it to myself anymore, I could not keep silent any longer, and I felt that this book must be done,” he said. 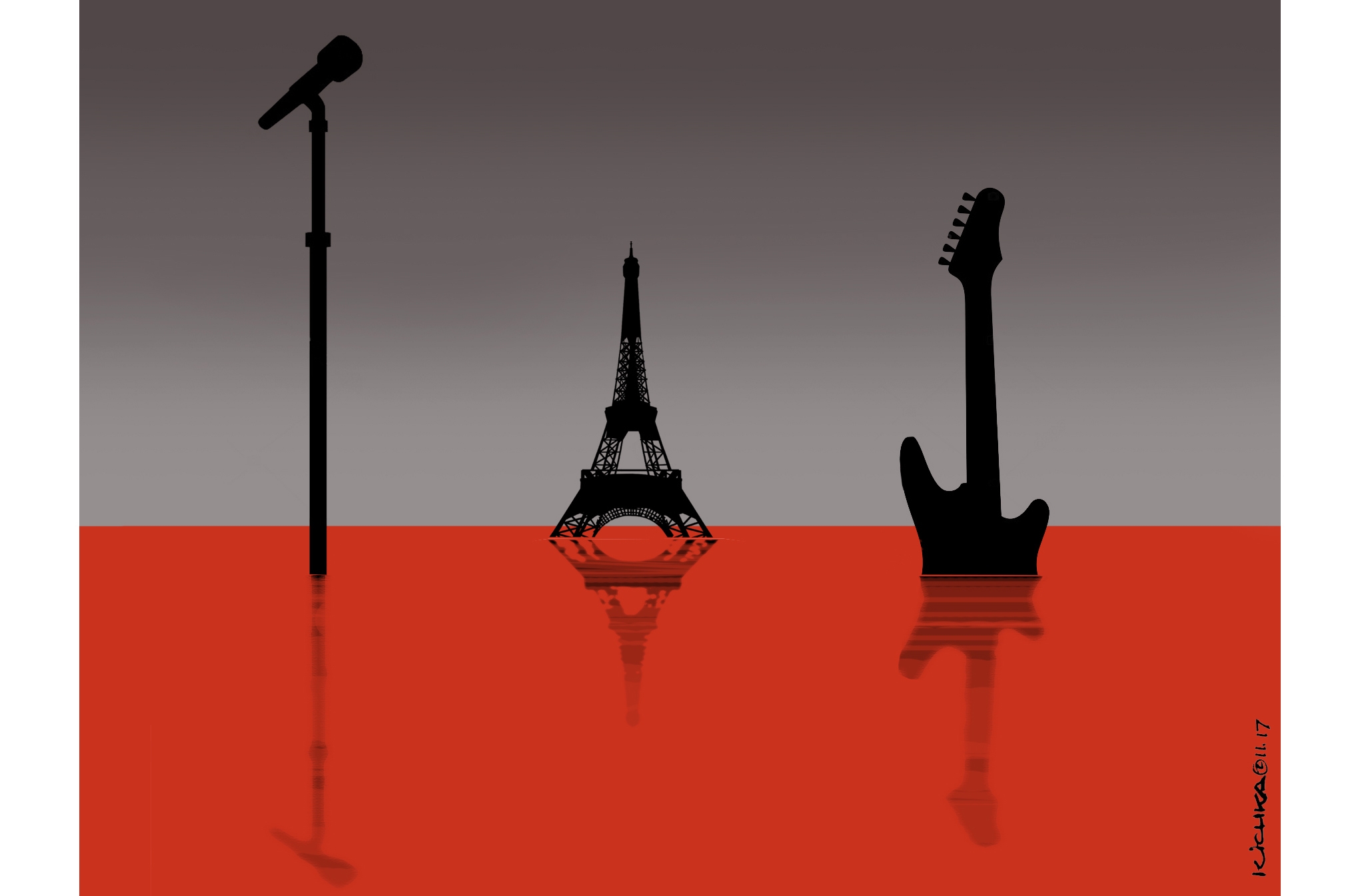 A Kichka image created on the second anniversary of the November 2015 terrorist attacks in Paris depicts a city flooded with blood.

Kichka is currently working on a second graphic novel about life in Israel. It addresses his views on Zionism and the Israeli-Palestinian conflict.

“I think it will be important for Israeli readers and for non-Israeli and non-Jewish readers because they have such a negative view about Israel and about Zionism in the last years,” he said. “I want to show that it’s not what they think, and there are so many ways to be Jewish and to be Israeli and they are all good enough.”