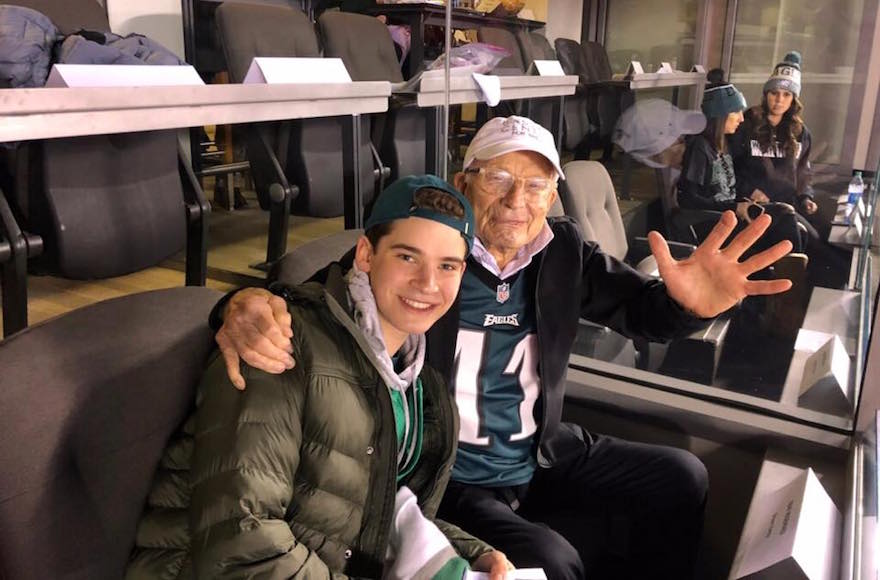 (JTA) — Throughout the NFL playoffs, the Philadelphia Eagles have been treated as gritty underdogs. So it’s only fitting that the city’s spotlight is now on a 99-year-old Jewish man who endured hardship before coming out on top.

For the past few days, as Philly cheers the Eagles making it to the big game on Feb. 4, it’s also celebrating Phil Basser, a native son who is waiting for his beloved football team to win its first Super Bowl. He will turn 100 in March.

“Philadelphia Phil,” as he’s come to be known, entered Philadelphians’ hearts after his 18-year-old grandson, Josh Potter, tweeted about him. Potter was responding to a tweet about 99-year-old Millie Wall, a Minnesota Vikings fan who was looking forward to the Eagles-Vikings matchup in Sunday’s NFC Championship game. He included a photo of Basser wearing the jersey of the Eagles’ injured starting quarterback, Carson Wentz.

“Looks like we got a battle of the centenarians!” Potter tweeted.

My 99yr old grandpa Phil (turning 100 in march) has lived in Philadelphia since 1918 and has never seen an Eagles Super Bowl. Looks like we got a battle of the centenarians! pic.twitter.com/yEvyd37W9n

The Eagles thrashed the Vikings, 38-7, to earn the Super Bowl berth, only the third in franchise history. Philly lost in its appearances following the 1980 and 2004 seasons.

Born to a poor Jewish family in 1918, Basser had a rags-to-riches story decades before he started making headlines. His mother died when he was 4 and his sister died when he was 8. He spent his weekdays in a local Jewish orphanage, the Jewish Foster Home and Orphan Asylum, and saw his father on weekends. His father died just as Basser was about to be deployed in World War II; he also served in the Korean War.

As an adult, Basser founded a successful advertising agency in Philadelphia bearing his name. He had four children and has 14 grandchildren and two great-grandchildren. His wife of 65 years, Pearl, died last year, and he moved to New York to live with his daughter.

“The successes of all of my children and their spouses make me feel like I’m living in a dreamland,” he said in an article published by the Eagles. “I can’t explain it. It’s heaven on earth.”

Basser isn’t a lifelong Eagles fan only because he’s been alive longer than the Eagles have existed. Their first game was in 1933, when he was 15, and he still follows the team week in and week out. When they play a late game, he told Fox, he takes a nap beforehand so he can stay alert.

He has attended about 25 Eagles games, mostly in their early years. But Basser and his family were on hand Sunday at Lincoln Financial Field for the NFC title game on the way to a shot at team history.

“One could look at my life and see the hurdles and the tragedy,” he told the Philly Voice. “These were all devastating, but I choose to wake up each and every day seeing the best that life has to offer.”