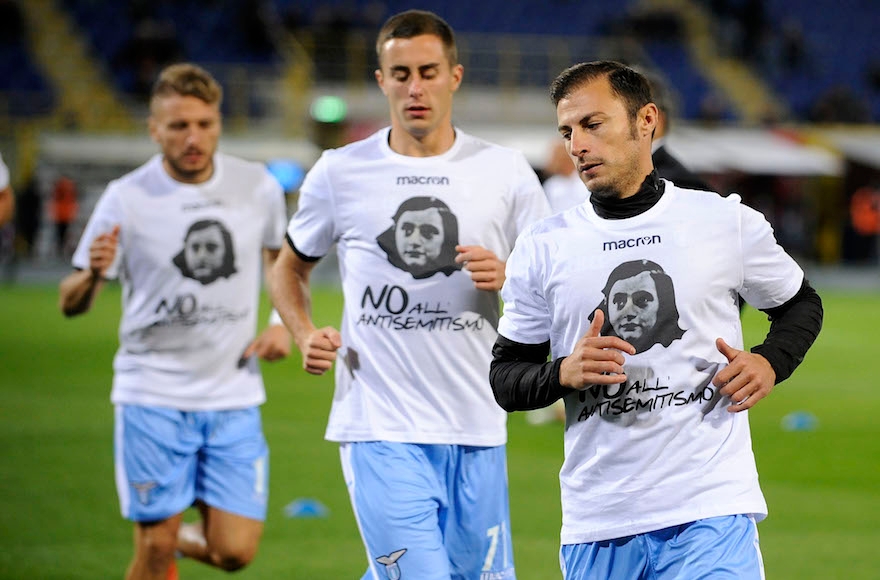 SS Lazio players warming up with shirts depicting Anne Frank and saying “no to anti-Semitism”, at a match against Bologna FC at the Stadio Renato Dall’Ara in Bologna, Italy, Oct. 25, 2017. (Marco Rosi/Getty Images)

(JTA) — A soccer team was fined after fans plastered stickers at its home stadium showing Anne Frank wearing the uniform of a rival city club.

The Lazio FC team will pay a fine of $61,000, but will not have to play two games without fans as requested by the Italian football federation prosecutor.

The stickers were found in a section of the stadium where Lazio’s most ardent fans, known as “ultras,” gather. The ultras have long been criticized for their racist and anti-Semitic actions during games. The team said the stickers were too small to have been noticed by maintenance crews, but the team was held responsible nonetheless.

The prosecutor had said that the stickers, depicting the Holocaust victim in the red shirt of city rivals Roma, were posted in October in Rome’s Olympic Stadium with “clear anti-Semitic intent, constituting discriminatory behavior.”

Lazio President Claudio Lotito announced in response to the incident that his club would take 200 fans every year to visit Auschwitz. Also, players would visit schools to speak to students about respecting rules and stamping out racism and social barriers.

Lotito also visited Rome’s main synagogue and laid a wreath there in memory of Holocaust victims and condemned the actions of the fans.

The football federation’s investigation found that up to 20 fans were involved in the incident.

Under Italian soccer rules, clubs are responsible for the behavior of their supporters in the stadium.

Following the incident, the soccer federation ordered that a passage from Frank’s famous diary  be read at the start of all soccer games at all levels throughout the country.