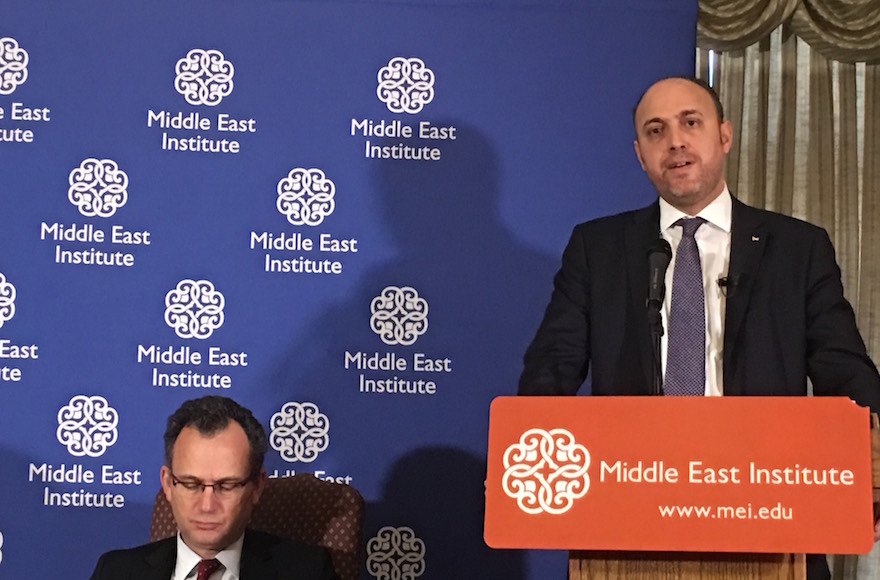 Husam Zomlot delivered his first remarks Thursday since the Dec. 6 recognition, addressing the Middle East Institute, a think tank. A main contact between the Trump administration and the Palestinian Authority, Zomlot conveyed a measure of the fury with Trump that P.A. President Mahmoud Abbas delivered at a PLO Central Council meeting last week.

But he also recommitted the Palestinians to the two-state solution and to continuing to seek engagement with Israelis.

The remarks, while defiant, also underscored a key Palestinian weakness, one Zomlot said his side must take blame for: They had failed to make their case to the American people, while domestic support for Israel in the United States remained strong.

He said Palestinians might target Congress, the elites, the media and the Jewish community.

Trump, meeting earlier in the day with Israeli Prime Minister Benjamin Netanyahu in Davos, Switzerland at the World Economic Forum, made clear Zomlot’s dilemma. The president blasted the Palestinians for “disrespecting” the United States and said that U.S.-Israel relations were “never stronger.”

Zomlot suggested the winds were in the Palestinians’ favor, alluding to an erosion of support for Israel among younger and liberal Americans.

Netanyahu “can speak to this Congress,” he said. “But can he speak at a university in California or Wisconsin?”

Trump, by recognizing Jerusalem as Israel’s capital, Zomlot said, broke not only with 26 years of U.S. commitments to act only as a peace mediator between the Israelis and the Palestinians, but his own pledge at the outset of his presidency not to impose a solution.

“Trump violated his own pledge, ‘I do not want to impose, I do not want to dictate’,” Zomlot, formerly a top aide to Abbas and the leader’s confidant, said. “Then you come and you want to take the core of the two-state solution out … you turn, backstabbing?”

The flag of the Palestine Liberation Organization seen above its offices in Washington, D.C., Nov. 18, 2017. (Mandel Ngan/AFP/Getty Images)

Zomlot dismissed Trump’s reassurance at the time that the recognition and the pledge to move the U.S. embassy to Jerusalem did not determine the city’s final status, and that it left open the possibility that a Palestinian capital might still emerge in eastern Jerusalem.

Zomlot said that Trump himself now insists that Jerusalem is “off the table.” He said that if Trump and the negotiating team led by Trump’s son-in-law, Jared Kushner, were sincere about maintaining a Palestinian stake in Jerusalem, they could have waited until Kushner rolled out a peace plan later this year and included in it a vision of the city as the capital for Israel and Palestine.

“Any embassy in the city is tacit recognition of Israel’s claim,” Zomlot said. “After reaching an agreement, we don’t mind two embassies” in Jerusalem, one serving Israel, the other Palestine.

Trump also suggested that if the Palestinians return to talks, his decision on Jerusalem would mean that it’s now Israel’s turn to give up something to keep the Palestinians in. “You win one point,” Trump said, looking at Netanyahu and apparently referring to his recognition of Jerusalem as Israel’s capital, “and you’ll give up some points later on in the negotiation if it ever takes place. I don’t know that it ever will take place.” Later, Trump said, “Israel will pay for that,” referring to Jerusalem.

Zomlot said threats to cut U.S. funding to the Palestinians would only embolden his people.

The thrust of Zomlot’s speech was that the Palestinians no longer saw the United States as an honest broker, and were now seeking a different multilateral structure for peace talks — one that would include the United States, but in which it would not be preeminent. That could be a critical distinction if Zomlot is to keep his job: the Trump administration has said the PLO office will remain open only as long as the Palestinians are committed to a peace process.

He said the Palestinians remained committed to the two-state solution — a retreat from a threat that Abbas and others have made recently that, should they despair of the peace negotiations, they would agitate toward Israeli citizenship and a “one state solution,” a solution that would likely ultimately erase Israel’s Jewish character.

“Even if we are the last samurai,” the Palestinians believe that the blood shed on both sides toward a two-state outcome made it worthwhile, Zomlot said.

Zomlot also downplayed a litany of anti-Jewish tropes in Abbas’ speech last week. The Palestinian leader had dismissed any Jewish connection to Israel, said Zionism was a European colonialist plot and claimed that Holocaust era Jews had preferred the Nazis to Zionism. Zomlot said that the media would have done better to focus on the policy substance of the speech, in which he said Abbas renounced violence and called for engagement with Israelis, repudiating those Palestinians who oppose such encounters because they “normalize” the Israeli occupation.

Zomlot dismissed claims by Netanyahu that Israel could accrue support without coming to a deal with the Palestinians, repeatedly saying such claims were “delusional.” In addition, he belittled leaked reports that U.S. allies including Egypt and Saudi Arabia were ready to back a peace deal that would deliver Palestinians a truncated state, with its capital in the West Bank near Jerusalem, and not in the city.

He acknowledged the limits of the international approach, pointing out that a U.N. Security Council resolution last month condemning Trump’s Jerusalem announcement failed because the United States vetoed it. But he also said that every other member of the council, including America’s allies, voted for the resolution, and that a non-binding General Assembly resolution condemning the announcement won a clear majority.