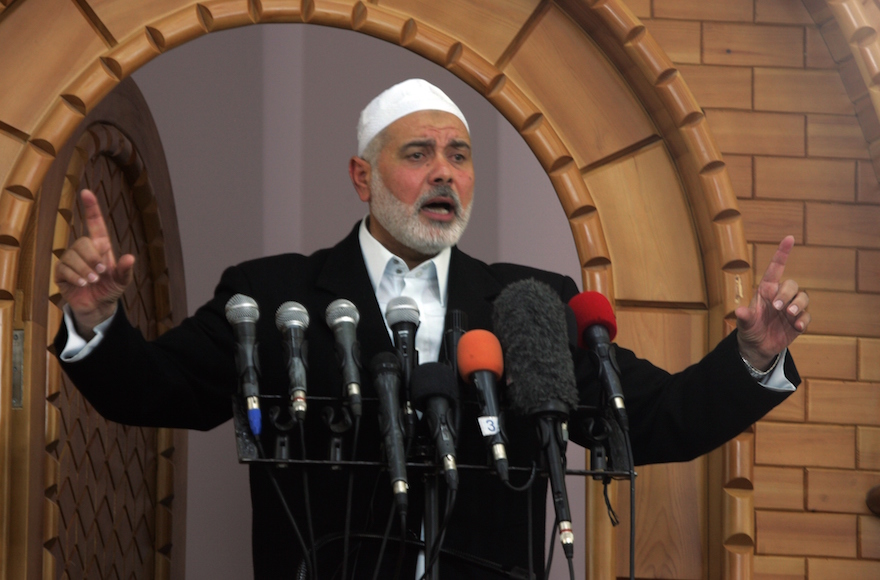 (JTA) — The State Department has added the leader of Hamas’ political wing to its list of designated terrorists.

Ismail Haniyeh, who lives in Qatar, is the head of Hamas’ political bureau and a former Palestinian Authority prime minister. He was placed on the list because the State Department determined that he has either committed or is a risk to commit terror attacks that harm U.S. citizens or the country’s national security or economy, according to a State Department news release Wednesday.

The designation means that all of Haniyeh’s property under U.S. jurisdiction is now blocked, U.S. citizens are prohibited from engaging in transactions with him and he no longer has access to the U.S. financial system. Three other terror groups — Harakat al-Sabireen in Gaza and two in Egypt — also were placed on the list.

“These designations target key terrorist groups and leaders – including two sponsored and directed by Iran – who are threatening the stability of the Middle East, undermining the peace process, and attacking our allies Egypt and Israel,” Secretary of State Rex Tillerson said in a statement. “Today’s actions are an important step in denying them the resources they need to plan and carry out their terrorist activities.”

Hamas, which governs Gaza, was placed on the designated terrorist list in 1997, nearly a decade after its founding. According to Politico, it called Haniyeh’s designation a “failed attempt to pressure the resistance.”

“I welcome the decision by the United States to include Ismail Haniyeh on the list of terror supporters,” he wrote. “Haniyeh and his allies work to advance terror against Israel, and are directly responsible for the suffering of Gazans since Hamas’ takeover in 2007.”