A century-old Siberian synagogue was built by abducted child soldiers. It’s back in Jewish hands. 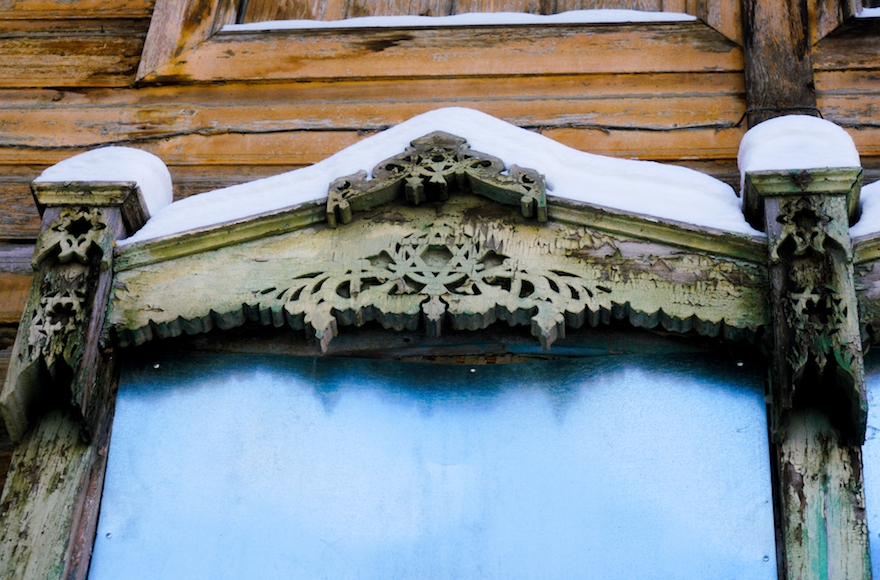 Stars of David in the woodwork of the building that used to house the Soldiers' Synagogue. (Cnaan Liphshiz)
Advertisement

TOMSK, Russia (JTA) — When two strange men approached 8-year-old Herzl Tsam in an alley of his hometown in what is now Ukraine, he knew that he had to run as fast as his legs could carry him.

In 1851, as a Jewish boy from a poor family in a shtetl near Volyn, he knew he was in danger of becoming a Jewish Cantonist — the Russian-language term for forcefully conscripted child soldiers. For 29 years, until 1856, these children had fallen victim to one of the cruelest measures ever applied against the Jewish population of Russia.

Like approximately 75,000 Jewish children who were abducted and turned into Cantonists, Tsam could not outrun his captors – likely professional kidnappers who enforced the 1827 act handed down by the czar, Nicholas I, obliging Jewish communities to provide 10 Cantonists per 1,000 residents.

But unlike most of the other victims, Tsam resisted pressures to convert to Christianity, instead climbing through the ranks on pure merit. One of only a handful of Jewish officers in the czar’s army, he retired in 1876 with honors as a colonel at the age of 41 and started a thriving Jewish community and a synagogue for other army veterans like him in this Siberian city.

On Thursday, the present-day Jewish community of Tomsk — a sleepy city of 500,000 residents located 2,000 miles east of Moscow — honored Tsam’s memory during a solemn ceremony in which the municipality returned to the community the synagogue that he had built nearly 120 years ago. Known as the Soldiers Synagogue, it is a dilapidated structure covered in snow and ice whose windows are boarded up to keep out squatters. But it is still beautiful a building and one of the few wooden synagogues of its kind still standing today. 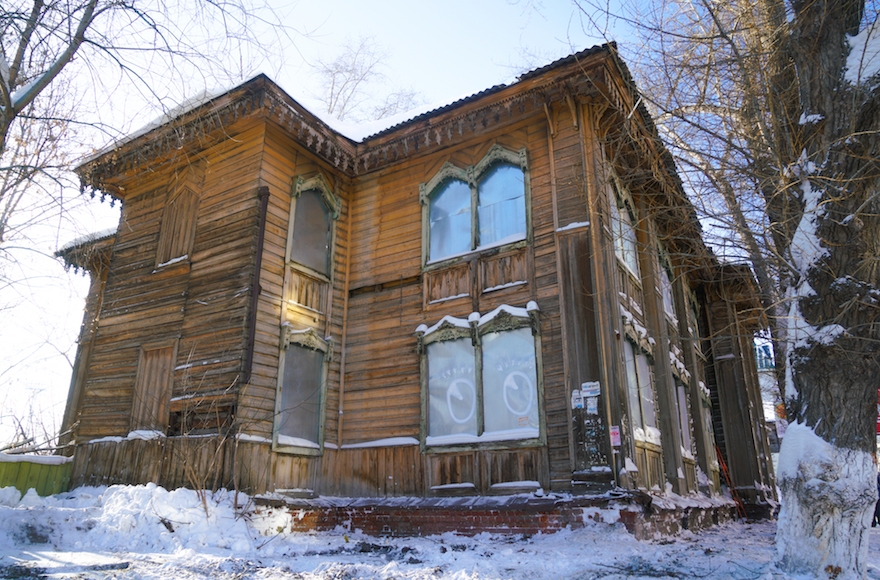 The building that used to house the Soldiers Synagogue in Tomsk. (Cnaan Liphshiz)

“It’s an important day,” Levy Kaminetsky, a Chabad emissary who moved with his wife, Gitty, to Tomsk in 2004, told JTA at the community’s main synagogue on Tuesday, amid preparations for the ceremony. “His story, the story of the Cantonists, is a story of endurance, faith, courage and revival. And in that sense, it’s one of the major stories of the Jewish people in Russia and beyond.”

Today, the synagogue that Tsam and his comrades built is a shadow of its former self. Dwarfed by the adjacent public prosecutor’s office, the cedar structure is surrounded by leafless bushes and a host of huts that used to be storage units but now are full of trash and rusty tools. The interior of the synagogue was gutted decades ago. After its confiscation in 1930 by Soviet authorities, it was turned into a theater and later a crowded and poorly heated apartment building where 17 impoverished families shared a communal kitchen.

The city found alternative housing for the tenants in 2014 ahead of its planned return, but homeless people took over the property in the interim, delaying the return and further deteriorating the building’s condition. The trash-littered floor now has deep holes and exposed wiring that require from the local community of 1,000 an investment of funds it does not have.

“We are being offered this building now, so we need to take it,” Kaminetsky said in the Great Synagogue of Tomsk, the city’s only functioning synagogue, which is located a mile away from the Soldiers Synagogue. “Honestly, it’s not perfectly timing, but we owe it to Tsam’s legacy.” He said the community “will have to find a way to restore” the building, possibly by appealing to donors outside Russia.

In addition to the 75,000 Jewish Cantonists, Russia had hundreds of thousands of non-Jewish ones, according to Yosef Mendelevitch, a rabbi from Jerusalem who in 2010 published a comprehensive book about the Jewish Cantonists.

“In its neutral sense, the term Cantonists simply means youths who were taken by a czarist decree to a military boarding house,” he said. “It was a prestigious institution dating back to the 18th century and a good opportunity for poor boys to get an education and income. Many non-Jewish families wanted their children to be Cantonists.” 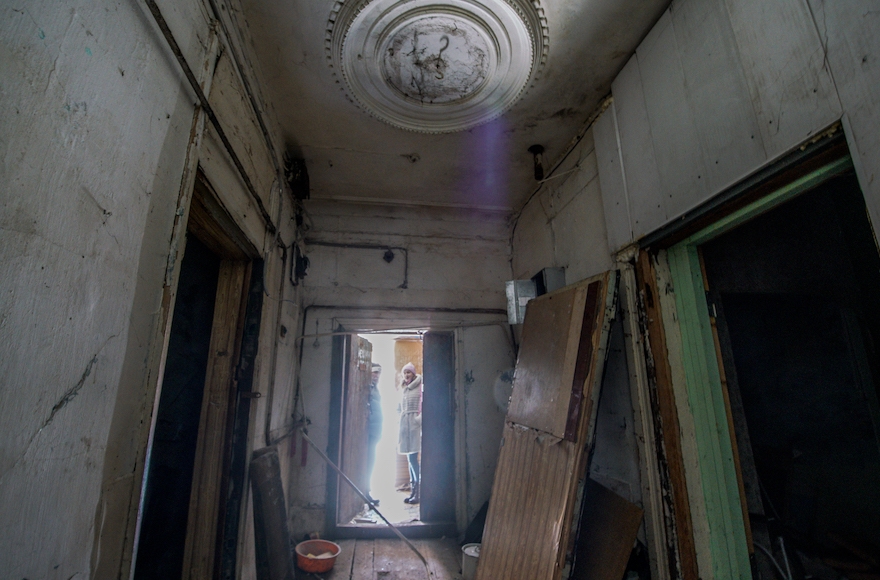 The entrance hall of the building that used to house Tomsk’s Soldiers’ Synagogue. (Cnaan Liphshiz)

Under the czar’s laws on Cantonists, of which Jews were initially exempted, seven youths older than 16 were to be placed in a military boarding house for every 1,000 residents. But in 1827, Nicholas I scrapped the exemption for Jews and lowered the conscription age for that community alone to 12. He also upped the quota, requiring from Jews 10 children per 1,000 residents.

It was part of an attempt to convert as many Jewish boys as possible to Christianity. Many boys younger than 12 were drafted by professional Cantonist hunters, according to David Kuzhner, a Tomsk Jewish historian who has studied the community’s origins.

Dubbed “Hapuns,” these hunters received bounties for each boy they delivered. Some Hapuns worked for rich Jews, who sent them to prey on poor ones to fill the quota.

Some of the families of the boys snatched by Hapuns were allowed to see them just one more time before they were shipped to boarding schools in Siberia and beyond.

“Weeping mothers brought food to give to their boys,” Kuzhner said. “More often than not it was the last kosher meal they ate in their life.”

But Tsam and hundreds of other Jewish Cantonists stuck to their faith, either resisting efforts by teachers and commanders to convert them or returning to Judaism once they were discharged.

“They and the synagogues they built are a testament and inspiration for the Jewish people,” Mendelevitch said.

The Soldiers Synagogue is also part of its Siberian region’s crumbling legacy.

Built in typical Siberian style, the building features elaborate window frames and a roof with a thorny crown of wooden pegs. Uniquely in Tomsk, the woodwork on the facade has dozens of Stars of David and an annex that faces westward, to Jerusalem, because it used to house the Torah ark.

This city, which has world-famous ice sculpture gardens in winter, when temperatures often drop to 22 degrees below zero Fahrenheit, has hundreds of broken-down wooden houses of the same period.

Eclipsed by communist-era housing projects, they stand on the brink of collapse, leaning like drunkards in strange angles and literally groaning under the hundreds of pounds of snow and ice that accumulate here on rooftops for months without melting. On long winter nights, the sound of trees breaking under that weight echoes in seemingly deserted streets.

Against this desolate background, Jewish community life is thriving.

During the High Holidays, 300 people flock to the main and only functioning synagogue. Confiscated from the Jewish community during communism and turned into a courthouse, it was returned 15 years ago, renovated and reopened in 2010. 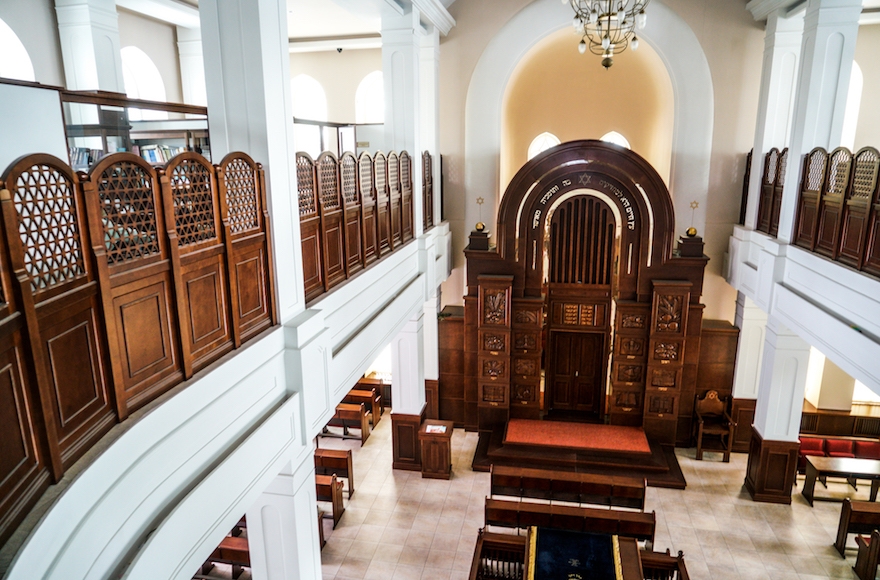 A view of the main prayer hall of the Great Synagogue of Tomsk. (Cnaan Liphshiz)

It has a mikvah and a preschool, where small children, cocooned in colorful overalls as thick as space suits, happily scamper about the snowed-in playground. There’s even a tiny Jewish elementary school with 15 students, and the third floor has a recreation room for teenagers and young adults.

“Despite its remoteness, Tomsk is a renowned university city and Jewish students enjoy a space with a ping-pong table and free WiFi,” said Boris Ramatsky, chairman of the Jewish Community of Tomsk. His grandfather was the last shamash, or custodian, of the Soldiers Synagogue, he said.

Tomsk’s intellectual character has been good for Jewish community life.

Banned during communism from universities in present-day Ukraine and Russian major cities, Jews were allowed to enroll in Tomsk’s universities, and especially its polytechnic institute. Many of them stayed.

But this intellectual character also created friction between Tsam’s congregation of army veterans and the established community, with its many doctors and businessmen, according to the historian Kuzhner. This tension was the trigger for building Tsam’s synagogue in the first place, he said. 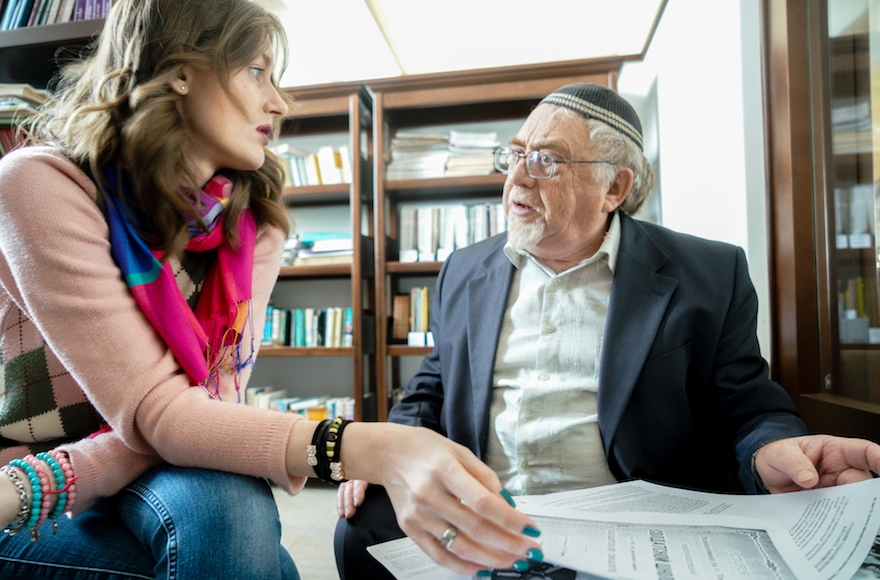 The trigger came in 1905, when one of the veterans, Moshe Gurevich, came with Tsam and a few of his friends to what was then the main synagogue of the city to make an aliyah – giving a blessing before the reading from the Torah scroll – to celebrate the birth and circumcision of Gurevich’s son.

But the men, who were likely happy and probably somewhat inebriated, were turned away from the Kaminersky Synagogue by the rabbi’s son, who suggested they go read from the Torah “outside or in a locker room somewhere,” said Kuzhner, who has the memoirs of Tsam, who died in 1915.

The former soldiers, who had withstood threats and humiliation in the army as children to hold on to their Judaism, “were deeply offended and decided then and there to start their own synagogue.”

Ironically, the Kaminersky Synagogue was destroyed without a trace during communism, whereas Tsam’s synagogue is still standing, even if just barely. During the Soldiers Synagogue’s 24 years in existence, it attracted many congregants who were not army veterans, partly because it was more centrally located than the Kaminersky shul from which the soldiers had been turned away.

Unlike Tsam and Gurevich, many Jewish Cantonists did not withstand the pressure to convert to Christianity in the military frameworks to which they were forced, according to Mendelevitch, himself a former prisoner of Zion in Soviet Russia who was jailed for planning to hijack a plane to Israel. He went on hunger strikes over the refusal to provide him with kosher food in jail.

“What’s striking in the story is not that many converted but that some children, young as 8 and 10, were able to resist,” he said. “They are an inspiration for the entire Jewish people, if not for humanity at large.”

Notwithstanding, many Cantonists started families that eventually assimilated. But thanks to social networks and growing interest in the Cantonists’ story, some of their descendants are retracing their Jewish roots today.

Like Ludmilla Lvovna, a history teacher in her 60s who last year found on Facebook distant relatives in Israel. The discovery made her research her family tree and find that her maternal great-great-grandfather, Wolf Bulwachter, was a Cantonist Jew who married a Jewish woman named Hannah.

“It seems I am descended from Kohens,” she told JTA during her first visit ever to a synagogue, referring to the priestly class of Judaism.

But standing at the women’s section of the Tomsk synagogue, Lvovna said she neither feels Jewish nor identifies as such.

“I mean, clearly I am,” she said. ”But for me the discovery was more about finding knowledge than readjusting my sense of identity.

“A person should know where they come from. That’s why I made the research. And it’s nice to suddenly have relatives in Israel, Canada, Australia — a big Jewish family!”