How the Trump administration condones discrimination in the name of religion 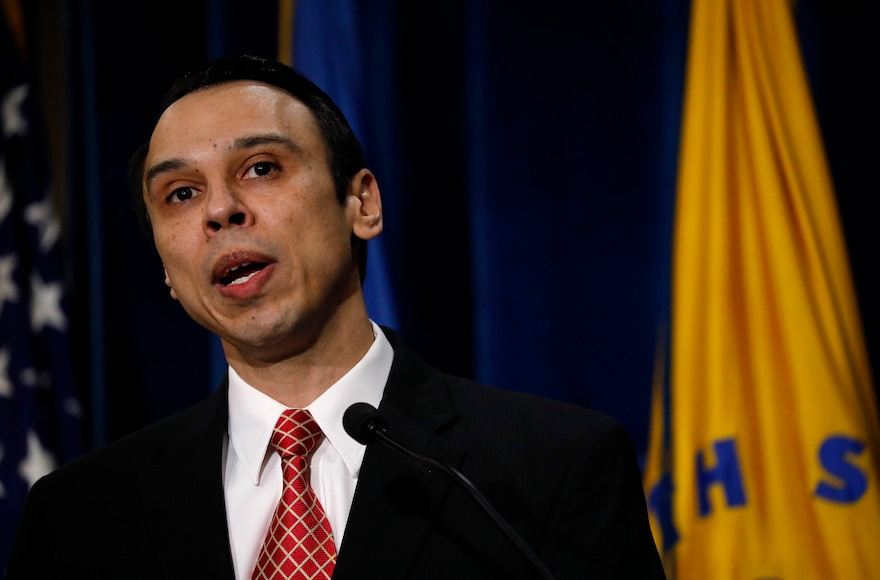 Roger Severino, director of the Office of Civil Rights at the U.S. Department of Health and Human Services, speaking at a news conference announcing a new division on Conscience and Religious Freedom in Washington, D.C., Jan. 18, 2018. (Aaron P. Bernstein/Getty Images)
Advertisement

Simply put, the Constitution’s religious liberty protections are a shield that safeguards free exercise of religion, not a sword to impose religious beliefs or harm others.

On Jan. 18, Roger Severino, director of the Office of Civil Rights at the U.S. Department of Health and Human Services, announced an extreme new regulation on “activities that violate conscience” and the creation of a new Division of Conscience and Religious Freedom to enforce it. These actions run contrary to his office’s historic mission. In fact, these actions seem designed to make it easier for health care providers to discriminate against women, LGBTQ people and others in the name of religion.

Under the new rule, a health care provider – even the only one in a remote area – could refuse to provide abortion or sterilization services or referrals, or possibly even decline to accept health insurance that covers these procedures.

Similarly, a hospital administrator could refuse to process any paperwork for tubal ligations or refuse to answer an inquiry on whether her employer provides abortions. And an orderly could refuse to take a patient by wheelchair to a medically necessary hysterectomy.

In the international arena, the detrimental impact of this rule is likely even broader. Federally funded health care providers can refuse to “participate in any program or activity” on moral or religious grounds. So as written, a doctor or nurse working for an HIV/AIDS program could refuse to treat a gay person or sex worker. A clinic that treats tuberculosis or malaria could refuse to treat transgender or Muslim patients.

Although Severino’s awkward and offensive remarks at the announcement analogizing health care providers who object to medical services on religious or moral grounds to Holocaust victims were unexpected, these latest actions should not be.

In just its first year, the Trump administration has established a track record of subordinating civil rights laws in the name of excessively broad and unsound notions of “religious liberty.” In October, the Justice Department issued guidance to all departments and agencies on “Federal Law Protections for Religious Liberty” that weakens anti-discrimination laws and infringes on the rights of religious minorities, women and LGBTQ people.

Based on that guidance, Health and Human Services issued an expansive new rule on the Affordable Care Act’s contraceptive mandate.

Previously, this provision required covered employers other than houses of worship and religiously affiliated organizations to provide health insurance coverage for prescription contraception at no cost to employees. The new rule effectively eviscerates the mandate by grossly expanding the existing religious exemption well beyond reason or need. The rule is now a paradigmatic example of an exception swallowing a rule. Under it, a publicly held Fortune 500 corporation could opt out of the mandate on religious grounds.

Health and Human Services also has repeatedly attempted to bar young immigrant women in government detention from obtaining privately funded abortions. Judicial intervention allowed several of these women to obtain the procedure. But it is unknown how many others have been denied their constitutional rights through this obstruction.

The Office of Civil Rights at Health and Human Services has a mission to enforce laws prohibiting discrimination on the basis of race, color, national origin, disability, age, sex and religion against health care and human services providers.

States and the federal government already have many conscience laws on the books that permit doctors and other health care providers to be exempt from performing abortions or sterilization procedures. Provided that the health and safety of patients are safeguarded, such accommodations are appropriate for doctors, nurses and others who actually may be called on to perform these medical procedures.

But the new rule – and the creation of an enforcing Office of Civil Rights division – unbalance and distort these laws and will thwart patients from receiving quality care.

The division conveys the unmistakable message that enforcement of civil rights protections for women and others by the civil rights office will be secondary to protection of a wide range of “religious liberty” assertions.

And the rule defines terms such as “health care entity,” “health service program,“ “assist in the performance” and “referral” so broadly that virtually any federally funded health care provider or employee cannot be penalized for refusing to provide care or services. The new rule undoubtedly will interfere with the provision of reproductive services at facilities receiving federal funding.

While some would argue otherwise, the new Health and Human Services rule and division are contrary to our nation’s foundational constitutional principles. By elevating very broad “religious liberty” interests over equality and anti-discrimination principles, the proposed rule disrespects minority religious beliefs (and those who do not practice any religion) and will inflict harm on everyday citizens.

The Trump administration should withdraw this misguided rule and find a more appropriate balance. If not, it will be challenged in court and, if long-standing constitutional precedents are applied, struck down as unconstitutional.