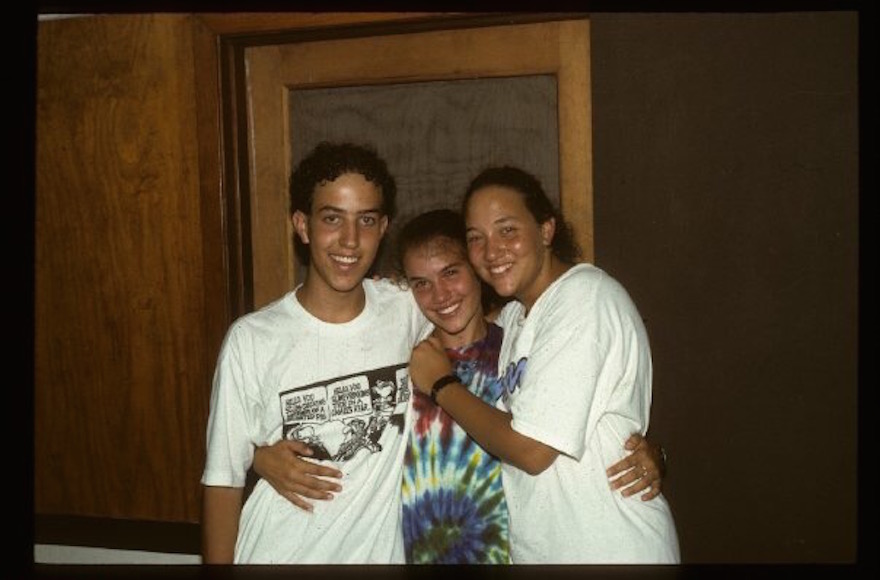 Micah Hart, left, with his sisters at camp back in the day. (Courtesy of Hart)
Advertisement

(JTA) — Many Jews attend overnight camp. But growing up, Micah Hart was so Jewish that he attended two every summer.

Hart was the son of the director of Jacobs Camp, a Reform Jewish camp in western Mississippi. He went there every year, but to give him some independence, his parents sent him for half the summer to another Reform camp, Goldman Union Camp Institute in Indiana.

Hart did the same things every Jewish camper did. He played dodgeball and tetherball, wore white on Friday night and learned Israeli dances. But like many others, his favorite part of camp was what happened outside the structured time, when he was chilling and messing around with friends.

Nearly two decades after his last camp summer, finding time to catch up with his camp friends was becoming more and more difficult. So he made a podcast about it.

“All we do is reminisce about fun times from back in the day, and I wish I had more of an opportunity to do that,” Hart told JTA. “Camp’s hilarious. We did things that were so ridiculous without context, and we found ourselves and grew up there and did things that were really embarrassing and amazing.”

“Campfires and Color Wars,” Hart’s podcast, has been airing every two weeks or so since the summer of 2016, and is now on its 41st episode. The podcast is, basically, Hart shooting the breeze with people who went to camp, most of them Jewish. The conversations cover anything from camp food to the lake to awkward sexual encounters.

A recent episode featured David Wain, the director and co-writer of the film “Wet Hot American Summer,” the cult classic about a Jewish camp. Hart recalled the time his counselors woke campers in the middle of the night and told them it was the morning, but the sky was dark because there had been a solar eclipse. From there they talked about Wain — who attended Camp Modin in Maine and Camp Wise in Ohio —  sneaking around the lake to the girls’ cabins, a comedy skit where Hart and his friends all dressed up as Adam Sandler, how Wain wore a Jimi Hendrix shirt every day … You get the idea. 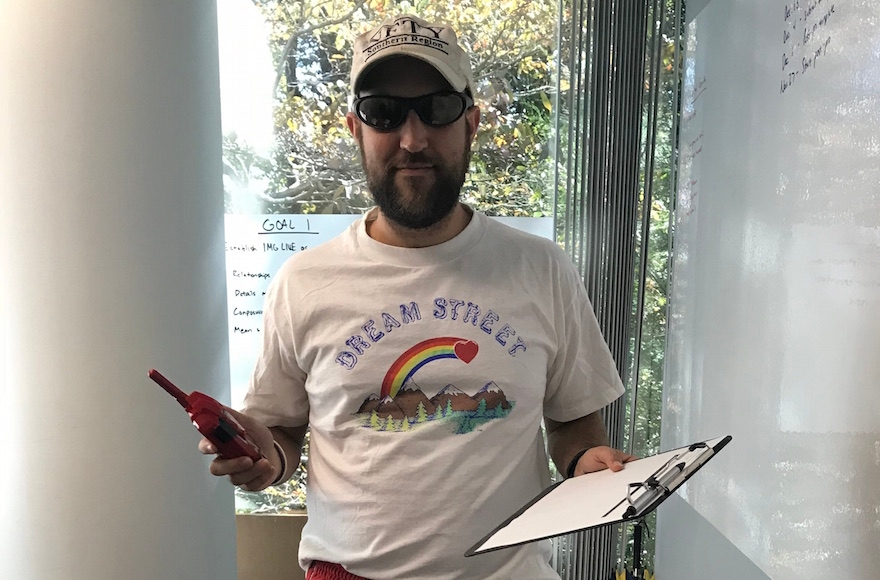 Micah Hart dressed up as a camp counselor for Halloween 2017. (Courtesy of Hart)

Wain also revealed that a classic “Wet Hot” scene — Victor crashing a camp van into a tree on the way to hook up with a girl — actually happened to him in real life. He was 16, newly licensed and had just driven campers to a mountain excursion. He was supposed to return to camp the next morning, but started driving back late at night so he could see a girl he’d just made out with. It didn’t end well.

“I was singing to keep myself awake, as was Victor in the movie, and I was driving through the windy Baxter State Park roads and smashed into a tree,” Wain said. “I had no idea what to do ’cause it was pitch black. I had no clue where I was. There was nobody around. … I honestly was like, ‘Maybe I’ll get eaten by a bear tonight.’ I just didn’t know.”

But of course, Wain eventually returned to camp — and unlike Victor, he hooked up with the girl.

(Lest you think camp is only about hijinks and hookups, Wain once told an interviewer that camp “was easily my most positive and lasting Jewish experience.”)

Other episodes depart a little from the Jewish camping world. Hart talks in one with Sara and Sam Richardson, two former Christian campers making a video series in which they visit and work at Christian camps across the country. Unlike Jewish camp, which can stretch to two months, Christian camp is usually only a week long.

Hart also acknowledges that camp has changed since the dozen summers he spent as a camper and counselor in the 1980s and 1990s. Safety regulations are much tighter, and there are those little things called cellphones. Hart knows he’ll encounter all of that when he sends his own kids to camp in a few years. So for him, the podcast is as much about nostalgia for a bygone era as it is about remembering his summers.

“I was fortunate enough to go before technology was really a thing,” he said. “With social media, I feel like that has changed so much [in terms of] the ability to escape the outside world.”

The podcast is a labor of love for Hart, who works in digital marketing by day. And while he thinks camp stories have value for everyone, he knows the quirky anecdotes are only really relatable to those who went to a camp. Or in his case, two.

“The things you do when you’re bored to make you not be bored is something I’ll always associate with camp,” he said. “If you didn’t go to camp, I don’t know what would interest you about it. You had to be there to understand it.”