Sam Bloch, a leader of the Holocaust survivor community, dies at 94 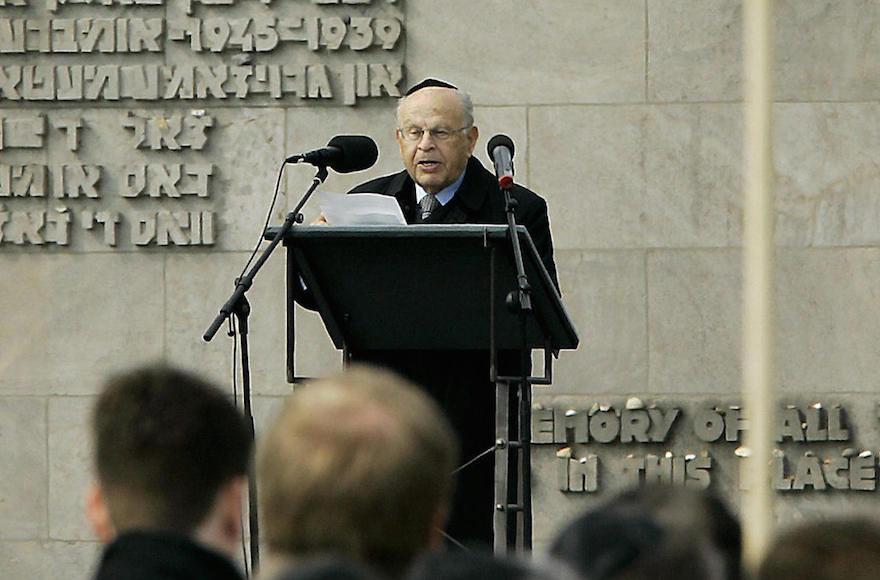 Sam Bloch, president of the "World Federation of Bergen-Belsen Associations" holds a speech during a ceremony marking the 60th anniversary of the liberation of the camp 80 kilometers north of Hanover, Germany April 17, 2005. (Jochen Luebke/AFP/Getty Images)
Advertisement

(JTA) — Sam Bloch, a Holocaust survivor who committed much of his life to ensuring that the murder of millions of Jews would not be denied and the lives they led would not be forgotten, has died.

Bloch, who was an executive of the World Zionist Organization and the Jewish Agency for 50 years, died Sunday. He was 94.

He was one of the principal organizers of historic survivor gatherings in Jerusalem, Washington, D.C., Philadelphia and New York. The New York Times published a lengthy article about Bloch and his family in 1981 as they prepared to attend the World Gathering of Jewish Holocaust Survivors in Jerusalem.

”Memory stengthens our humanity, makes us better persons to one another, to our children,” Bloch told The Times. “Maybe we don’t smile or laugh as others do, but we cherish our lives; they were so hard won.”

In addition, Bloch was a founding member of the International Society for Yad Vashem, Israel’s Holocaust remembrance authority, and a founder of the American Friends of the IDF.

Bloch was born in Ivie, Poland, in what today is Belarus. He attended high school in Vilna, and was home on a school break when World War II broke out, according to information provided by his family. His father was murdered by the Einsatzgruppen Nazi mobile killing unit, and Bloch, his mother and brother escaped from the Jewish ghetto and hid first with Christian farmers and then in the woods. They later joined the Bielski partisan brigade and were able to survive the war.

He was the youngest leader of the Jewish Committee that governed the Bergen-Belsen Displaced Persons Camp, the largest Jewish DP camp in Germany and a major center for the rehabilitation of 50,000 survivors of the Holocaust, as well as the flight and rescue operations in Europe that brought survivors to then-Palestine.

He met and married his wife of 69 years, Lilly Czaban, in the DP camp, from where they immigrated to the United States.

Bloch served as president of the American Gathering of Jewish Holocaust Survivors and Their Descendants; president of the World Federation of Bergen-Belsen Survivors Associations; chairman of the Advisory Council of the Foundation for World War II Memorial Sites in Lower Saxony, Germany, and served as a member of its board.

In 1981, Elie Wiesel, then-chairman of the U.S. Holocaust Memorial Council, appointed him as chairman of the council’s Board of Advisers as well as a member of its Development, Days of Remembrance, and Content committees.

Bloch was appointed by then-New York Mayor Ed Koch to the commission that created the Museum of Jewish Heritage-A Living Memorial to the Holocaust. As chair of the Jewish section of the Swiss Humanitarian Fund, he assisted in distributing $180 million to needy survivors. He continued to serve on the board of the Conference on Jewish Material Claims Against Germany until his death.

He published 30 volumes of Holocaust memoirs, history and poetry, in English, Hebrew and Yiddish editions, as editor of the Bergen-Belsen Memorial Press, and edited numerous significant documentary volumes.

“Sam was a giant, one of the last of what was truly the ‘Greatest Generation’ who emerged from the devastation of the Shoah not with bitterness and hatred, but with a determination to create new families, and rebuild Jewish life, all the while devoting his energies to perpetuating Holocaust memory and strengthening Jewish identity,” said Menachem Rosensaft, Bloch’s son-in-law, who himself was born in the Bergen-Belsen DP camp and was the founding chairman of the International Network of Children of Jewish Holocaust Survivors. “He was a lifelong Zionist who dedicated himself to the unity of the Jewish people with the State of Israel at its core.”