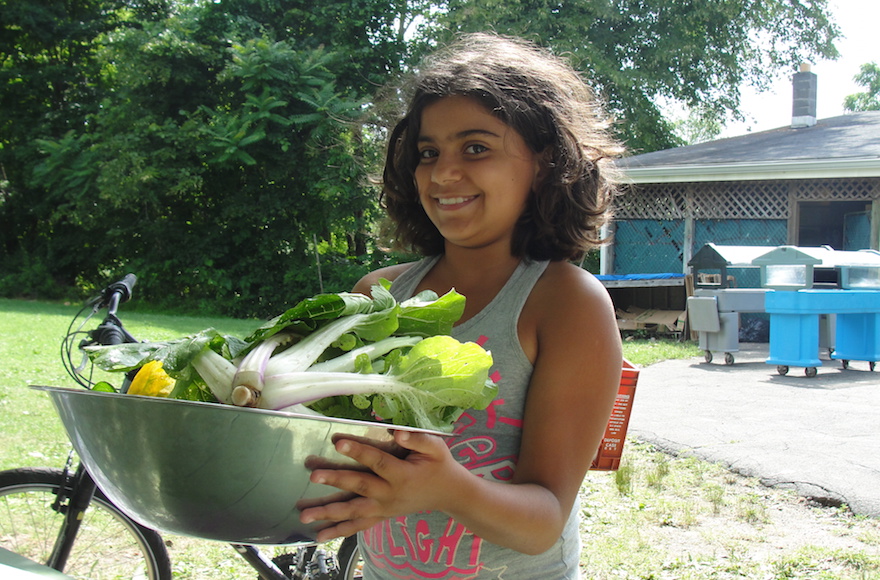 (JTA) — The letter Cy Golanski wrote to his grandmother last summer was short, to the point and a little different from the typical note home from sleepaway camp.

“The food here is so good. Please ask my mom when the cookbook is coming out,” the 11-year-old wrote, adding a request that his grandmother make the same tomato soup he was eating at camp.

This year, he will head to his fifth summer at Eden Village Camp, a Jewish camp in Putnam Valley, New York, with a focus on farming, food and wilderness. Kids there eat meals such as baked fish with chimichurri rice pilaf, Moroccan vegetable tagine and green curry with tofu and vegetables, all made from scratch with organic, local and consciously sourced ingredients.

Sleepaway camps are traditionally associated with institutional food that is more filling and bland than delicious and health-conscious. But camps are  becoming more focused on promoting healthy eating in an enticing way, said Michele Friedman, director of new camp initiatives at the Foundation for Jewish Camp.

“It’s been a growing trend in the last five to 10 years, trying to promote healthy eating among young children and help them develop good eating habits, and at the same time make it fun,” Friedman told JTA.

Eden Village Camp, which launched in 2010 and is opening a new location this year in Richmond, California, is one of several sustainable living camps that the foundation has helped launch through its incubator programs.

The camp is home to a four-acre farm and some 80 fruit trees, and kids help to grow and harvest produce. Farming makes vegetables more appealing to kids, founding director Yoni Stadlin told JTA.

“When they’ve got their hands on growing broccoli, they’re much more likely to eat it,” he said.

Camp Zeke, which launched in 2014 in Lakewood, Pennsylvania, promotes healthy living through nutrition and exercise.

“I think a lot of families are really focused on healthy living at home, and they are looking for camps that reflect those values in the camp,” said Isaac Mamaysky, who serves as the camp’s director with his wife, Lisa.

At Camp Zeke, the canteen offers a smoothie bar and trail mix instead of the traditional candy and chips. Campers can participate in a variety of exercise programs, such as yoga, martial arts, dance and climbing. 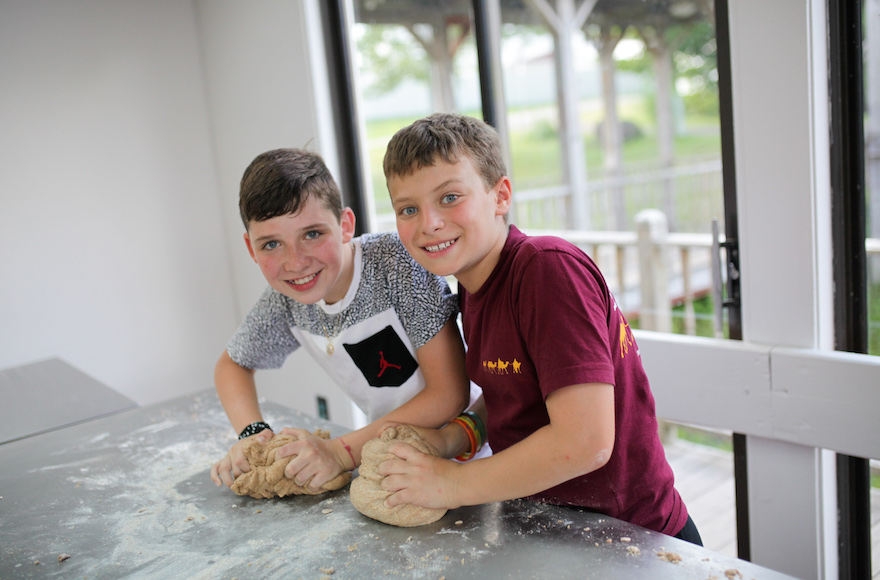 And while kids still eat traditional camp offerings, such as pizza and chicken wings, they are made in healthy ways.

Camp Zeke also caters to kids with food restrictions and has a separate chef dedicated to their needs. In recent years, the program has seen an increase in requests for vegetarian and vegan fare, as well as the trendy Paleo diet, Mamaysky said.

Friedman said the Foundation for Jewish Camp has seen camps increasingly catering to kids with dietary limitations, such as gluten allergies and sensitivities and lactose intolerance.

“There is a lot more in terms of food sensitivity and food allergies that have caused camp to amend the way the menus are developed and the kind of food that they’re serving,” she said.

In 2011, NJY Camps, a network of Jewish camps in Milford and Lakewood, Pennsylvania, opened a gluten-free kitchen to cater to kids with celiac disease and gluten sensitivity. The camp decided to do so after staff noticed an increasing number of campers following gluten-free diets, said Janet Fliegelman, the chief operating officer.

“What was happening is people were sending food for their children, so that they could follow their diet, and it was isolating,” she told JTA, adding that there were also cross-contamination issues.

NJY Camps tries to make gluten-free meals similar to the day’s regular meal so that campers won’t feel left out.

“The idea of it is that a child who is gluten-free can come to camp and not feel pointed out, not identified. They can have a completely inclusive experience,” Fliegelman said.

NJY Camps also accommodate children with other dietary restrictions, such as nut allergies and lactose intolerance, according to Fliegelman. 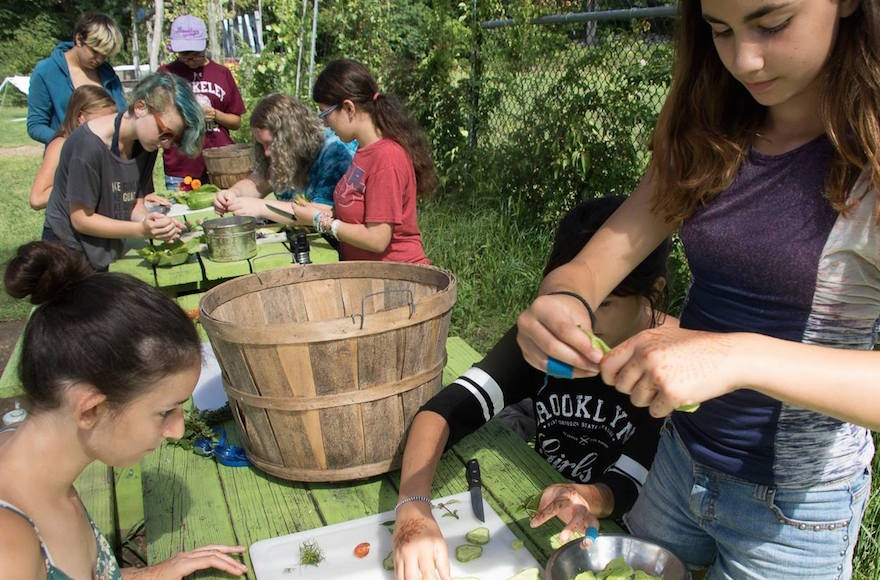 Friedman said the focus on healthy eating stems from inside and outside influences.

“I think what’s happening is that the trends that you see in society in general certainly have infiltrated summer camp, and specifically Jewish summer camp, because I think food is a big part of the tradition,” she said.

The fact that kids help to grow some of the food brings an added significance to Jewish rituals, Stadlin said. At Eden Village Camp, kids tend to, harvest, winnow, thresh and grind wheat in order to make challah.

“The coolest thing about it is that when that’s done, and they’ve seen this big field turn into a small container of flour and then that turns into a little loaf of challah, and they know how much work went into that, at the end of that you don’t need to convince kids to say the motzi,” he said, referring to the Jewish blessing over bread.

Golanski’s mother, Gina Schmeling, a nonprofit consultant living in Brooklyn, said her two sons are never quite as healthy as when they return from Eden Village Camp at the end of the summer.

“They have ideas or suggestions about food, what to make, or how to prepare things that I know a more traditional camp wouldn’t provide,” she said.