Chuck Schumer: Orthodox Jews should do more to call out Trump for failing to condemn neo-Nazis 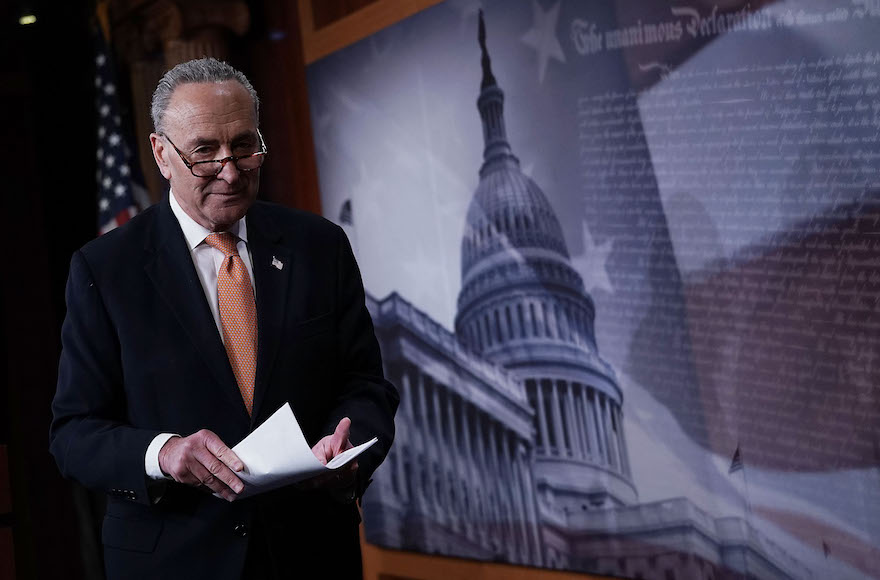 WASHINGTON (JTA) — An otherwise congenial meeting between Jewish organizational officials and Democratic senators included a moment when Sen. Chuck Schumer, the minority leader, said Orthodox Jews should do more to call out President Donald Trump for failing to confront hate in the United States.

Schumer, D-N.Y., described what he depicted as a tepid reaction to Trump’s equivocation following the neo-Nazi and white supremacist march in Charlottesville, Virginia, in August.

Members of the Orthodox group present at the meeting on Wednesday, the Orthodox Union, responded by saying that it and other groups had expressed concerns about Trump’s remarks in a timely fashion after the demonstration, participants told JTA.

The annual meeting is an off-the-record forum for Democrats and Jewish leaders to exchange notes on topics of concern. JTA spoke to a number of participants who would not go on the record. The perceived intensification of anti-Semitism was one of several topics. Others included the Trump administration and Israel, and Democratic efforts to protect illegal immigrants who arrived in the United States as children.

The Senate was hours away from passing a critical spending bill, and so a number of issues were raised regarding funding, including for a program that underwrites security protection for nonprofits, and for legislation that would extend disaster relief assistance to religious institutions.

The meeting, which ran over an hour and was chaired by Sen. Amy Klobuchar, D-Minn., attracted 24 Democratic senators, with many of them dropping in for several minutes.

That was the case with Schumer, according to participants. Orthodox Union representatives delivered their reply after Schumer left.

The Charlottesville march turned deadly when a white supremacist rammed his car into a crowd of counterdemonstrators, killing one and injuring at least 20. On the day of the march, Aug. 12, Trump blamed “both sides” for the violence, prompting outrage from Democrats and some Republicans, as well as Jewish groups. Over subsequent days, Trump appeared to walk back his equivocation, condemning the neo-Nazis, and then again insisting there were “fine people” on both sides.

Orthodox groups condemned both the march, which occurred on a Shabbat, and Trump’s equivocation in real time.

“I don’t know if [President Trump] meant to give these groups legitimacy, but that is certainly how [the groups] are taking it, which is a problem,” Rabbi Moshe Bane, the Orthodox Union president, said in an article appearing in Hamodia on Aug. 16, a day after Trump had said there were “fine people” on both sides.

In a comment sent to JTA, Schumer’s spokeswoman, Marisa Kaufman, called for Jewish leaders to speak “boldly” in the face of anti-Semitism.

“Steering meetings, like the one Senator Schumer spoke at this week, encourage dialogue and an exchange of ideas between Democratic members of the Senate and community leaders,” she said. “This week, Senator Schumer was pleased to speak with key members of the Jewish community. Senator Schumer used this platform to discuss dreamers, maintaining strong bipartisan support for Israel, the unfortunate rise in anti-Semitism at home and abroad, and the need for Jewish leaders to use their influence by boldly speaking out against words and acts of hate that tear us apart.”

In addition to leaders from the Reform, Orthodox and Conservative movements, groups represented included the Anti-Defamation League, the American Israeli Public Affairs Committee, J Street, the Jewish Council For Public Affairs, the Jewish Democratic Council of America and the Conference of Presidents of Major American Jewish Organizations.

Those present noted that the chairman of AIPAC, Bob Cohen, and the chairman of J Street, Jeremy Ben Ami, sat next to one another and appeared to get along. J Street is often described as a left-wing counter to AIPAC.