In Memphis, congressmen from opposing parties are teaching their colleagues about getting along. Their rabbi approves. 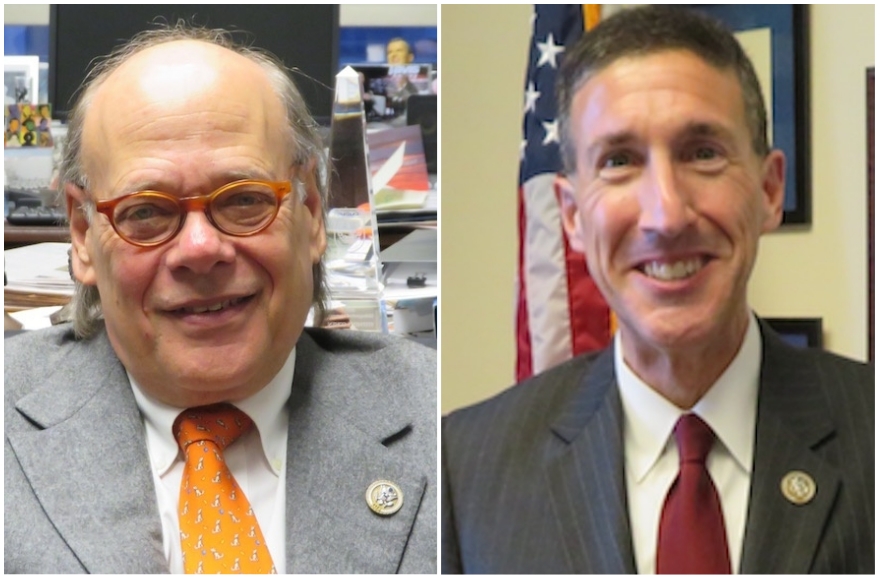 WASHINGTON (JTA) — When the two congressmen representing Memphis meet on the plane home from the nation’s capital, the lawmakers catch up on what they have in common: the NCAA Division I basketball team at the University of Memphis; mutual friends in the legal communities; and what’s up at Temple Israel.

Despite a shared affection for the university’s Tigers, a shared alma mater and a shared faith, Steve Cohen, a liberal Democrat, and David Kustoff, a conservative Republican, are polar opposites in Congress. Cohen is leading an effort to launch impeachment proceedings against President Donald Trump. Kustoff enthusiastically embraced Trump during his freshman run for Congress in 2016.

That hasn’t stopped them from working together on issues they care about, and both say they wish there were more cross-party partnerships like theirs in the U.S. House of Representatives. Their most significant collaboration was on a bill last year that would enhance penalties for attacks on religious institutions. They’ve also worked to get federal assistance to preserve Clayborn Temple, a focal point of the 1968 sanitation workers strike that culminated in the assassination of the Rev. Martin Luther King Jr.

Most of the votes that sent Kustoff to Congress are outside the Memphis area, but the city still ranks high on his priorities.

“We have issues in common,” Cohen said exactly a week earlier in his congressional office. “To help the Memphis community.”

Their rabbi at Temple Israel, Micah Greenstein, said their shared love of Memphis is a function of a city that has always been gracious to its Jewish minority (10,000 strong) and of a community that has returned the affection.

His synagogue, Greenstein says, has been a locus of civil rights activity for going on a century. One of his rabbinical predecessors spoke out against lynchings in the early 20th century; another was a leader in integrating the city in the 1960s. (The temple is in Kustoff’s district, but perched on the border of Cohen’s, with a satellite for millennials inside the latter’s district).

“Our mission statement is to be a force for good not only for the Jewish community but for the greater community,” Greenstein said in an interview.

The synagogue’s 1,500-seat sanctuary, arranged in a semi-circle, is meant to suggest that it is up to congregants to finish the circle in the community at large.

“Our sanctuary is in a semi-circle because prayer has to lead to action,” the rabbi said.

Cohen and Kustoff share that commitment, Greenstein said, but in districts that reflect their respective values. Cohen’s 9th district, which includes the lion’s share of Memphis, is majority African-American. Much of Kustoff’s 8th is rural and white.

“Steve Cohen’s district is home to Beale Street,” the legendary blues music district, “and poverty,” Greenstein said. “His priorities are different than the farmers and the suburbs in David Kustoff’s district.”

Yet chat with one congressman and you’re likely to be reminded of the other: They might have emerged from the same factory manufacturing avuncular, self-deprecating and wry southerners. Which in a sense, they did.

Kustoff, 51, and Cohen, 68, knew each other long before either entered national politics.

“His father and I were friends,” Cohen said. “We practiced law.”

And they were products of a Jewish community and a city of under 700,000 where everyone seems to know everyone else — what Greenstein called “the smallest city that is an overgrown town and the biggest town that is a city.”

Cohen, first elected in 2006, said he and Kustoff had a passion for retail politics.

“We share a commitment to fortitude and pursuing politics and working hard and having a good base,” he said.

Each described politicking at home in vivid terms. Cohen talked about the Memphis-style barbecue joints, including Corky’s, which is Jewish-owned, and Payne’s (“Greasy and sweet ribs — they can motivate you.”). A redistricting after the 2010 census moved many of the best joints into Kustoff’s district, he said.

“Regrettably, they took a lot of areas that were my stomping grounds,” he said.

“When I’m back in the district, I’m traveling through as many counties as I can, meeting constituents,” he said, offering to take a reporter on the drive the next time he is in Memphis. “I enjoy it.”

Each acknowledged brushes with anti-Semitism. In 2008, a Democratic rival of Cohen’s said he “hates Jesus,” and in 2016, a Republican rival of Kustoff’s reminded voters that he was the “Christian conservative” in the race. But each also said that the support they have garnered is not simply despite their Jewishness but because their constituents actively reject bigotry.

Cohen said some have tried to convince African-American voters to reject him because he was a white Jew. Such appeals fell flat, he said, because black voters recognized the dangers of appeals to race.

Kustoff, a former U.S. attorney, said that when constituents did ask him about faith, it always turned out well.

“When I campaigned for this office, I would literally knock on constituent doors, and I would get asked by some, ‘Where do you go to church?,’ and my response would be ‘Temple Israel,'” he recalled. “Virtually every time I would give that response, the person would say ‘I love Israel, what can I do to help?'”

The redistricting after 2010 removed most of the Jews from Cohen’s district and placed them in Kustoff’s — something Cohen clearly regrets.

The Jewish community is immensely proud of both lawmakers, said Andy Groveman, a Memphis businessman who chairs the United Israel Appeal nationally.

“They have differences, but they have worked together and have really shown that while you can be from different parties, the interests of the community should be first,” he said.

Kustoff and Cohen, when they have worked together, complement each other. Cohen helped garner Democratic support for Kustoff’s maiden bill as a lead sponsor, on protecting religious institutions (the lead Democratic sponsor was Derek Kilmer of Washington state). Kustoff framed the final tally card — 402-2 in favor — and keeps it in his office.

Kustoff, who has naturally better ties to the Trump administration, used contacts in the Interior Department to help secure the naming of Clayborn Temple as a National Treasure by the National Trust, which extends to the building federal assistance for renovation. The former church was a staging ground for marches by over 1,000 striking sanitation workers in 1968, which became a focal point of the civil rights movement.

Meantime, the Tigers will provide fodder for conversation next time Cohen and Kustoff meet on the plane to Memphis. They’re 5-6 in the American Athletic Conference, with sportswriters using terms like “wilting” to describe their performance. (The university had a Jewish coach, Josh Pastner, from 2009 to 2016.)

“Steve and I are both big basketball fans,” Kustoff said, mentioning both the Tigers and the Grizzlies, the city’s NBA franchise, which has lost two-thirds of its games this season. “We’ve supported them in the good times and the bad times.”