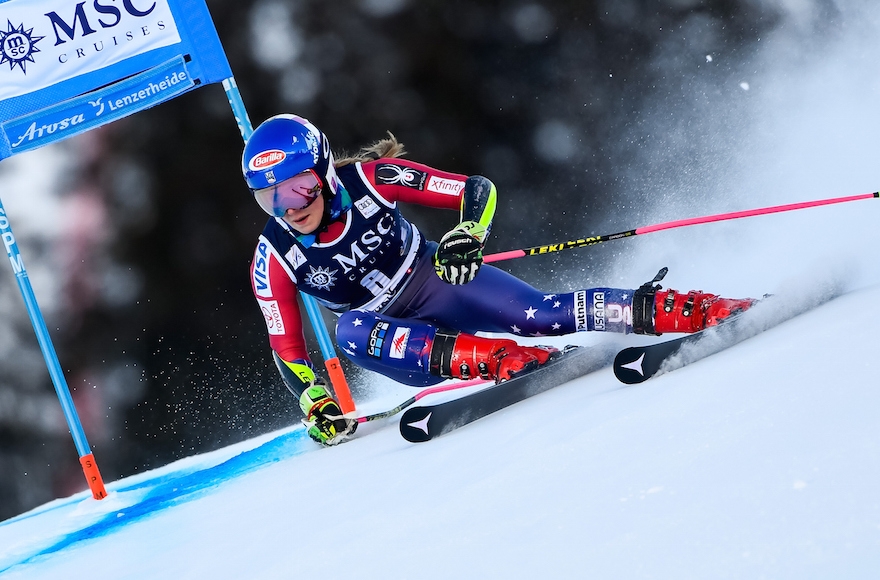 (JTA) — All eyes are on skiing star Mikaela Shiffrin ahead of the Winter Olympics in Beijing.

The two-time gold medalist, three-time Overall World Cup champion, and, as of this writing, winner of 70 World Cup races is the most decorated U.S. alpine skier in history.

And yet, she almost stopped skiing last year. Her father tragically died in February 2020 at age 65 after an accident at their home.

However, she got back in her boots, and started skiing again — with the goal of competing in all six alpine skiing events in Beijing.

Many Jewish fans are probably wondering if Mikaela Shiffrin is Jewish.

The skier has a surname not uncommon in the Jewish community. According to this German research company, Shifre is a Yiddish female name that means beautiful, and Shiffrin — with the Slavic -in ending — means “ancestor of Shifre.”

So could this Shiffrin be a member of the tribe?

The short answer: not really.

Mikaela is the daughter of Eileen (née Condron) and Jeff Shiffrin, who are both former ski racers. Mikaela’s grandfather on her father’s side was Jewish, but that tradition wasn’t passed down. The New York Jewish Week reported in 2014 that the U.S. Ski and Snowboard Association said Shiffrin has “some very distant heritage [but] is not connected to the Jewish community.”

In Beijing, Shiffrin is favored to win gold medals in slalom and giant slalom — those technique-heavy events in which skiers glide and weave between poles or gates (as opposed to the downhill and super-G categories, which are considered more straightforward “speed” events). She is also a contender in the combined event, which involves both slalom and downhill runs.

At the 2014 Winter Games in Sochi, Russia, she won gold in the slalom event at age 18, becoming the youngest slalom champion in Olympic alpine skiing history. In Korea in 2018, she struggled with the pressure, saying, “I felt a way in South Korea that I never, ever wanted to feel again in my skiing career.” She still won gold in giant slalom.