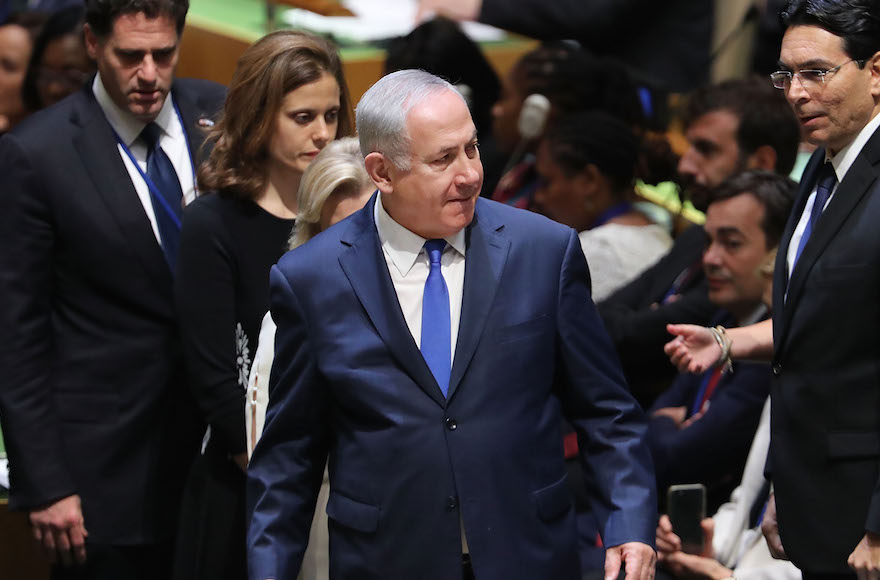 Israeli Prime Minister Benjamin Netanyahu at the UN headquarters in New York in September. He has been the focus of multiple corruption investigations. (Spencer Platt/Getty Images)
Advertisement

The recommendation, made public on Tuesday evening, comes after yearlong investigations into the two alleged corruption cases.

State prosecutors must now decide whether or not to file indictments.

Netanyahu in an address to the nation Tuesday night maintained his innocence, saying the recommendations “cast a dark shadow” and “have no place in a democratic state.”

“I will keep working for the good of the country, not for cigars from a friend and not for better media coverage,” he said in reference to the accusations.

During his tenure as prime minister, some 15 investigations have been opened against Netanyahu to “topple me from power,” he said. The prime minister said he is sure he will be re-elected in the next national elections, which are scheduled for November 2019.

Netanyahu has maintained his innocence over the course of the investigations, saying on more than one occasion, “There will be nothing because there is nothing.”

In December, Netanyahu told Likud party supporters at a convention that “there will be recommendations, so what? Here’s a fact you probably don’t know: Over 60 percent of police recommendations are thrown out and never result in indictments.”

Netanyahu is at the center of two probes. In one, known as Case 1000, he allegedly received expensive gifts from supporters in return for advancing their interests, including expensive cigars and champagne from the Israeli-born Hollywood producer Arnon Milchan. In the other, Case 2000, Netanyahu is alleged to have conspired with Arnon Mozes, the owner of the Israeli daily Yediot Acharonot, to advance legislation hobbling the free and pro-Netanyahu tabloid Israel Hayom bankrolled by American billionaire Sheldon Adelson.

Milchan and Mozes also will be charged.

Police reportedly said that Yair Lapid, head of the opposition Yesh Atid party, was a central witness in the Milchan case.