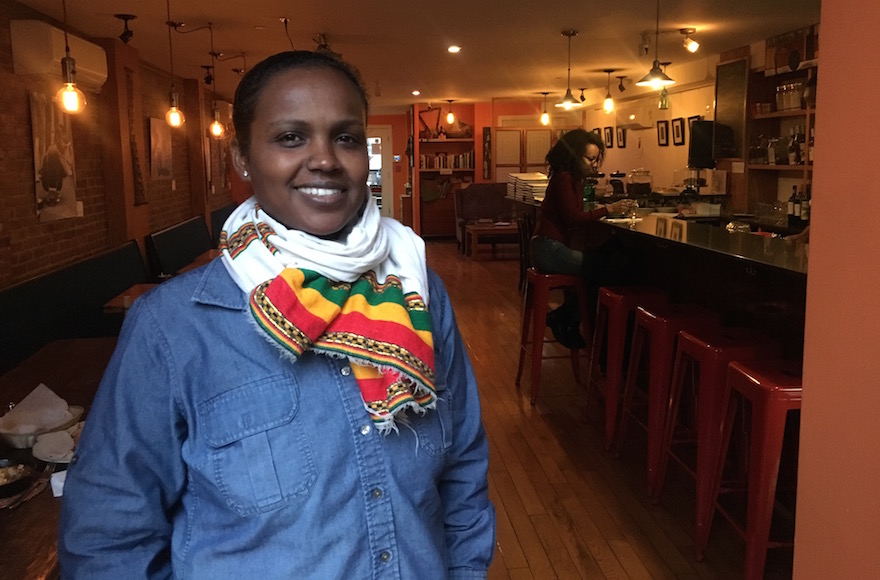 NEW YORK (JTA) — At Tsion Café in Harlem, visitors can order a vegetable injera, an Ethopian sourdough flatbread topped with vegetable, lentil and chickpea stews. There is traditional shakshuka, a dish common in Israel and the Middle East where eggs are cooked in a hearty tomato sauce. And then there’s the scrambled eggs with caramelized onions and lox.

The assortment of menu items — random as it may seem — tells the story of the eatery’s owner, Beejhy Barhany, an Ethiopian Jew who moved here by way of Israel.

Tsion Cafe, which is located in the historic Sugar Hill district of the Manhattan neighborhood, represents all of Barhany’s identities.

“It’s a celebration of the Ethiopian, Israeli and American [cultures], so we are encompassing and celebrating all of these together,” she told JTA last month.

Barhany, 42, also wants the restaurant to serve as a cultural center of sorts. On the wall hang paintings by local artists, and on the weekends bands play jazz, a nod to the neighborhood’s influential role during the Harlem Renaissance, when African-American artists, musicians and writers converged in Harlem.

The restaurant’s venue is historic in itself. It previously was the home of Jimmy’s Chicken Shack, a famous eatery and jazz spot frequented by Malcolm X and comedian John Elroy Sanford, also known as Redd Foxx, and where jazz saxophonist Charlie Parker Jr. washed dishes before his big break.

“A lot of inspirational people passed through, and we’re very happy to continue that by playing music and celebrating the diversity within Harlem,” Barhany said.

Barhany came to New York in 2000: She was enamored with the city on a trip here after completing her Israeli army service.

In this city, she feels less defined by her race or status as an immigrant than she did in Israel.

“Here you could be whomever you are and nobody knows who I am. I’m Ethiopian, I’m a New Yorker, I’m here, but I’m not categorized as Ethiopian, Russian, Yemenite,” she said, referring to immigrant groups to Israel that have faced various types of discrimination.

Barhany was 4 years old when her family left Ethiopia for Israel. The journey took three years, passing through Sudan, Kenya, Uganda and Europe. They arrived in the Jewish state in 1983, in the early days of the Ethiopian migration to Israel.

In Israel, the family initially lived in an immigrant absorption center in Pardes Hana, in the country’s north, later moving to the city of Ashkelon. At 13, Barhany decided to move to a kibbutz, where she lived until joining the army at 18.

Barhany disputes what she sees as a common but distorted narrative: that Ethiopian Jews were poor and suffering prior to moving to Israel. She said her family chose to leave Ethiopia because of a longstanding wish to return to the Jewish homeland.

“[W]e voluntarily left Ethiopia because we wanted to be in Israel,” she said. “We had our land, we had our properties, we didn’t starve or anything like it. We were doing very well.”

Barhany opened Tsion Café in 2014 with her husband, Padmore John, a native of the Caribbean island republic Dominica. The pair wanted to start a restaurant that offered both healthy food and culture.

“I think it’s important that you eat healthy food, good products, and I wanted to have a venue where I can encompass everything — a little bit of culture, a little bit of food, and in a place where nobody did it before,” Barhany said.

She wants Tsion Café to serve as a venue for people to connect.

“My bigger vision is for people from all backgrounds [to] come and talk and have a discussion, a dialogue, and to be more open minded, despite the political situation that we are in, to be more embracing and welcoming one another,” she said.

Barhany is also the founder of Beta Israel of North America, a group for Ethiopian Jews. She founded the group in 2000, so she could come together with others who shared her background. She estimates that some 1,000 Ethiopian Jews live in the New York area.

“I had nobody to reach out to so I said, ‘Let me create that, so whoever comes at least can be assisted,’” she said.

The organization hosts the annual Sheba Film Festival, now in its 15th year, which highlights the experiences of African Jews.

Her two children, a 12-year-old girl and 8-year-old boy, are part of the Ethiopian Jewish community here — and other communities as well.

“They are Ethiopian, Israeli, American, Caribbean,” she said.

Barhany said she finds ways in Harlem to honor all the different parts of her identity — and to incorporate them in the dishes at Tsion Cafe.

“I’m a proud Ethiopian, a proud Jew, a proud black female living in Harlem, so all of that is part of me,” she said. “I celebrate all of that.”