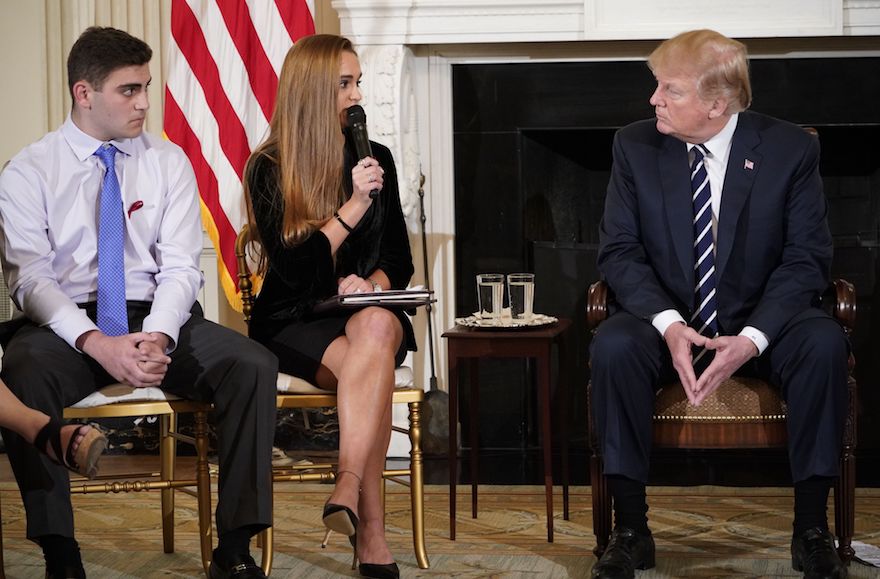 President Donald Trump in a listening session on gun violence with teachers and students in the State Dining Room of the White House on Feb. 21, 2018. (Mandel Ngan/AFP/Getty Images)
Advertisement

WASHINGTON (JTA) — Andrew Pollack, whose daughter Meadow was among the 17 people slain by a gunman last week at a school shooting in Parkland, Florida, told President Donald Trump that it must be the last school shooting.

“My daughter is in King David Cemetery,” Pollack said at the White House session convened by Trump, Vice President Mike Pence and Education Secretary Betsy DeVos. “Never, ever will I see my kid, it’s an eternity.”

Pollack, surrounded by his three sons, vowed to work with Trump to stop school shootings.

“How many schools, how many children have to get shot?” he asked. “It stops here, with this administration and me.”

The White House event gathered victims of a number of school shootings over the past 20 years, and Trump canvassed those present for ideas on how to stop school shootings.

Pollack called for increased security at schools, noting that the 9/11 terrorist attacks  in 2001 triggered immediate enhanced protections for airliners, while a succession of school shootings have left schools vulnerable. He advised against litigating gun laws for now, saying the issue was too divisive.

Others did counsel changes in gun laws, most forcefull, Sam Zeif, a Jewish senior at the school whose text exchanges with his younger brother while both were under siege went viral.

“These are not weapons of defense, these are weapons of war,” said Zeif, 18, who wept intermittently during the session. “I still can’t fathom that I myself am able to purchase one.”

Trump wondered aloud whether arming teachers was a solution — many of those present disagreed in a show of hands — and vowed to enhance background checks for gun purchasers.

Israel  came up several times during the exchange as an example in controlling guns and enhancing security.

Cary Gruber, the father of Justin Gruber, one of the Stoneman Douglas survivors, noted the tough restrictions on gun ownership in Israel. Darrell Scott, whose daughter, Rachel, was slain during the 1999 school shooting at Columbine High School in Littleton, Colorado, said an example that American schools should emulate is having a single secured entrance.

“In Israel, they have one entry point and it’s very well guarded,” Scott said, noting that he speaks frequently at schools and easily enters and exits. “We have really soft entry points into schools.”