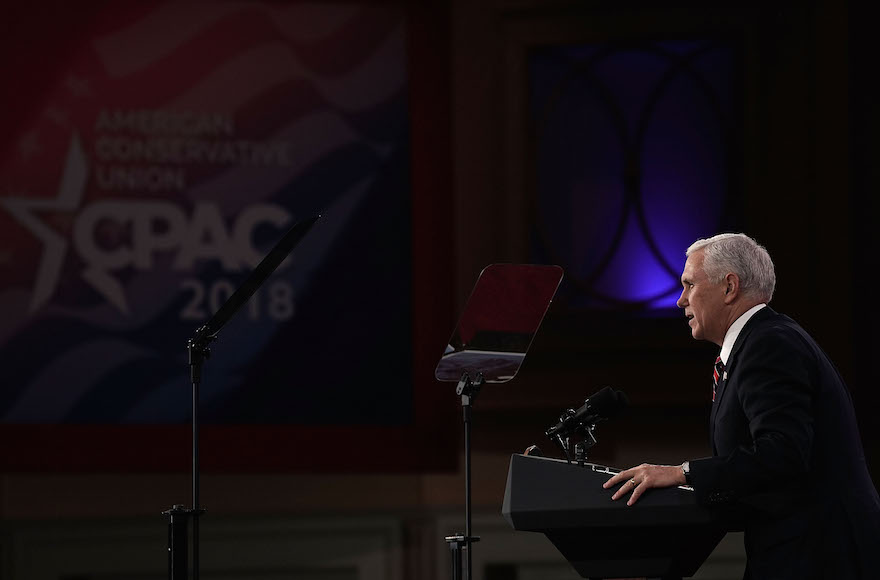 WASHINGTON (JTA) — Vice President Mike Pence earned one of his biggest applause lines at an influential conservative conference when he cited President Trump’s recognition of Jerusalem as Israel’s capital.

Pence, speaking Thursday at the Conservative Political Action Conference, outlined the promises that Trump has fulfilled his first year in office.

“America once again stands without apology as leader of the free world,” he said. “For decades after one president after another promised to move our embassy to the capital of our most cherished ally, on Dec. 6, President Trump made history when the United States of America recognized Jerusalem as the capital of the state of Israel.”

That got huge applause from the activists at the American Conservative Union’s annual conference, which has become a focal point of the conservative movement. Trump is scheduled to speak to the conference, being held in a Maryland suburb of Washington D.C., on Friday.

“This country will no longer certify the disastrous Iran nuclear deal,” he said.

Trump’s decision not to recertify the deal does not mean he is fully withdrawing from it: The deal, which swaps sanctions relief for a rollback of Iran’s nuclear program, remains in place. Trump has said he may yet fully pull out of the deal and reinstate sanctions unless the deal is amended.

Also speaking at CPAC was Marion Maréchal-Le Pen, a scion of the Le Pen family which has for decades dominated France’s far-right National Front. Le Pen’s aunt, Marine, who leads the party, has in recent years sought to tamp down the party’s forays into anti-Semitism, but French Jews generally remain wary of the party and its hypernationalist and anti-Muslim rhetoric.

Le Pen devoted much of her speech to naming commonalities between French and American conservatism, and she appealed particularly to the nativist streak in both countries. French youth, she said, “are brainwashed with guilt and shame of their country. The result is the development of an Islamic counter-society in France.”

Le Pen embraced Trump’s “America First” slogan — one critics have linked to its use by World War II-era anti-Semitic isolationists.