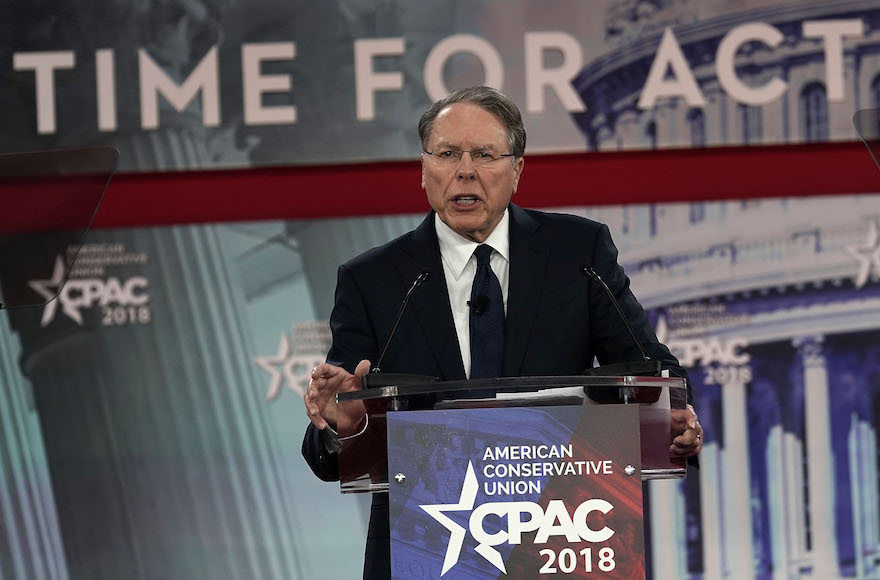 WASHINGTON (JTA) — Wayne LaPierre, the executive vice president of the National Rifle Association, told a conservative conference that three liberal philanthropists were funding a socialist takeover of the United States.

“Every time in every nation in which this political disease rises to power,” LaPierre told the CPAC conference on Thursday, describing socialism, “its citizens are repressed, their freedoms are destroyed, and their firearms are banned and confiscated, and it’s all backed in this country by the social engineering and the billions of people like George Soros, Michael Bloomberg, Tom Steyer and more.”

Soros is a hedge fund trader who has been prominent in backing Democratic policies, but also is known for promoting free markets overseas, particularly in formerly communist countries. Bloomberg, the former mayor of New York, has taken a lead in recent years in promoting gun control, but also has a pro-business reputation cultivated through his eponymous news service.

Steyer, also a hedge funder, for decades has been involved in Democratic politics, with much of that focus on the environment. Last year he launched a movement to impeach President Donald Trump.

All three are Jewish, although Steyer, whose wife is Episcopalian, attends a church in that denomination.

LaPierre painted an apocalyptic picture of the challenges he said are facing conservatives.

“Their goal is to eliminate the Second Amendment and firearms freedom so they can eliminate all our freedoms,” he said of gun control activists.

“Saul Alinsky would be proud” of gun control activists, LaPierre said, referring to the Jewish community worker who authored a how-to book on social activism.

Despite being dead for decades, Alinsky remains a byword for radicalism among some conservatives.