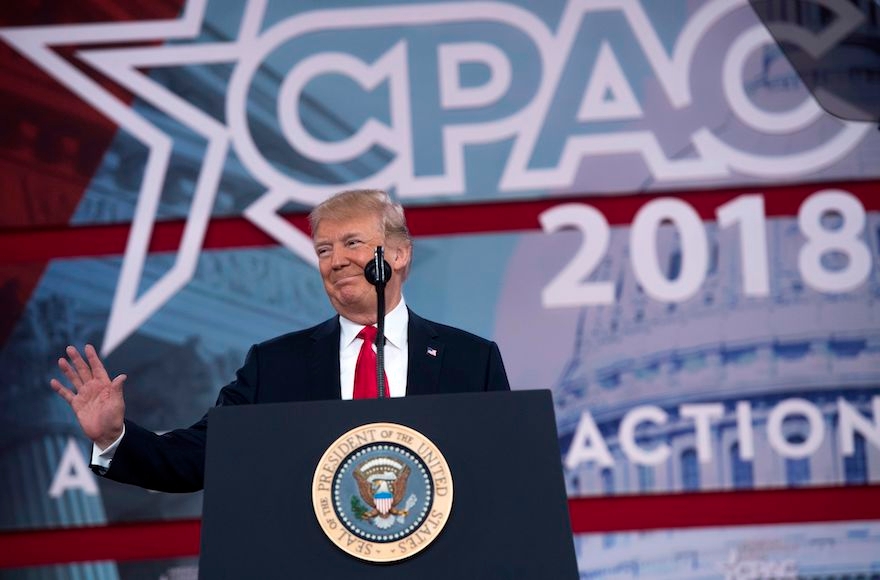 “I had them in the Oval Office, incredible people,” Trump said Friday at CPAC, an influential annual conference for conservatives, describing his meeting with the family of Meadow Pollack. “She had a beautiful, beautiful smile, a beautiful life.”

Meadow Pollack was 18 and a senior at Marjory Stoneman Douglas High School, where an expelled classmate opened fire last week, killing 17 people. Her father, Andrew, and her three brothers were a riveting presence this week when Trump convened a meeting for survivors of school shootings at the White House. Andrew Pollack pledged to work with Trump to stop school shootings.

“So full of promise, we wish there was something, anything we would do to bring Meadow and all the others back,” Trump said. “There are not enough tears in the world.”

The president went on to say: “No family should never have to go in and suffer the way these families have suffered. A father drops his daughter off at school, kisses her goodbye and waves to her as she’s walking up the path and never sees her again.”

Trump, received with adoration during the one hour, 20-minute speech, reviewed some of the proposals he has offered since the shooting, including turning schools into “hard targets” by arming some teachers.

He went over his first-year accomplishments, including tax cuts, and gave prominence to fulfilling his campaign pledge to move the U.S. Embassy to Jerusalem from Tel Aviv.

“We officially recognized Jerusalem as the capital of Israel,” Trump said to thunderous applause.

Trump said he understood why other presidents had reneged on the promise because they came under tremendous pressure not to move it after assuming office.

“The campaign against it was so incredible, but you know what, the campaign for it was also incredible and we did the right thing,” he said, again prompting cheers.

Trump also noted that he would no longer certify Iranian compliance with the 2015 Iran nuclear deal, although he stopped short of saying he would pull out of the agreement trading sanctions relief for rolling back Iran’s nuclear program. He decried the Obama administration for releasing frozen Iranian funds to a hostile country after the pact was completed.

“If somebody said death to America while I’m signing an agreement,” he said, “I would say what’s going on, I’m not signing.”