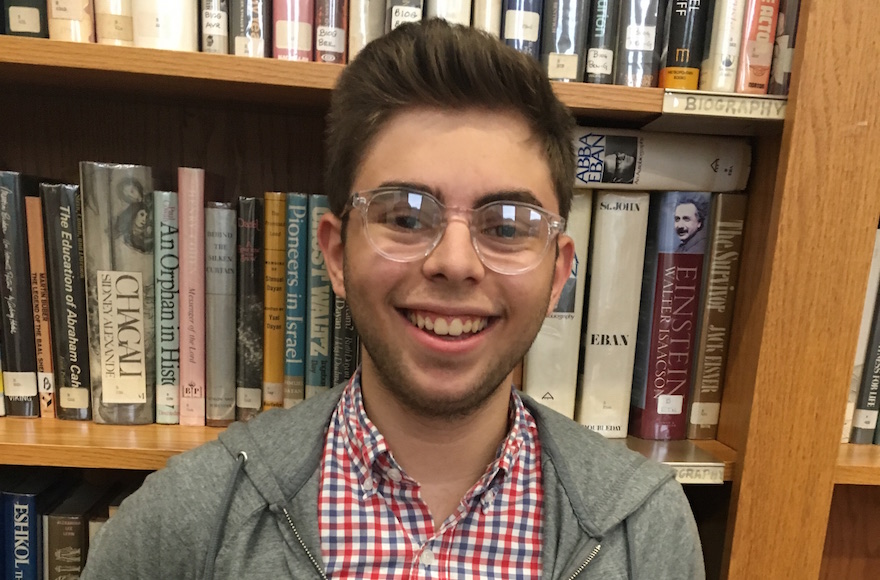 (JTA) — Ilan Cohen loves Kansas. He knows a couple of people in Kansas. He’s currently, officially, running to be governor of Kansas.

And one day he hopes to visit Kansas. And turn 18. And be able to vote. And graduate from high school.

Right now, Cohen is a 17-year-old junior at the Charles E. Smith Jewish Day School in suburban Washington, D.C. But that hasn’t stopped him from officially launching a gubernatorial campaign in a Midwestern state he’s never been to. Visit CohenForKansas.com, and you will see an honest-to-goodness campaign site complete with a biography, links to media coverage (including, um, Wikipedia) and an inspiring photo of corn.

Why is Ilan Cohen running for governor of Kansas?

“One of the key reasons behind this candidacy is teen participation in political life,” Cohen told JTA in a 20-minute break from his campaign schedule — and 11th grade. “There are many ways of getting involved in the political scene before you’re 18, and oftentimes in ways you don’t necessarily expect. For instance, running for governor of Kansas.”

An apparent oversight in Kansas’ electoral laws has allowed anyone, anywhere, of any age, to become a candidate for governor. A handful of teenagers have jumped at the opportunity. They include Democrats, Republicans and others. One candidate misspells the word “independent” on his campaign site.

The state did successfully bar a dog from running, and it is now trying to figure out how to keep this from happening in the future. A bill raising the minimum age to 18 and requiring residency in the state is advancing.

“I went on the website, entered my name, my address, phone number and email address, and then I did the same thing for my treasurer, and then maybe one more time, and then I pressed submit,” Cohen said. “I didn’t have to show ID or prove that I’m a citizen of the United States or anything. It’s a very easy process.”

The first teen to register to run for Kansas governor was Jack Bergeson, also 17, who began his campaign last year. Bergeson is actually from Kansas and, like Cohen, is a liberal running in a state that’s been red since the 1968 election. Bergeson’s platform is a bit more detailed than Cohen’s: He supports Medicare for all, a $12 minimum wage and laying high-speed rail between major Midwestern cities. JTA was unable to reach him directly.

“I am not getting into the so-called game of politics for my own personal gain,” Bergeson said at a teen candidates’ forum recorded by the Wichita Eagle. “Ultimately I decided to take the plunge into the deep end to do something career politicians tend not to do. That’s taking the power away from the wealthy few and handing it to the people who work 40 hours [a week] or more just to put food on the table and keep the lights on.”

Cohen said his top issue is narrowing the educational achievement gap, though his campaign is more lighthearted. But he’s a serious admirer of the current student activism for gun control launched by survivors of the school shooting in Parkland, Florida. Cohen was an organizer of a planned student walkout last week protesting gun violence that the Charles E. Smith administration ultimately quashed, according to the school’s student paper, the Lion’s Tale.

“I’m inspired by it,” Cohen said of the Parkland campaign. “I think the work they’re doing is very crucial. I think it is beautiful. I think it is important, and I think it set a very important precedent for the country.”

When he’s not in class, Cohen is involved in youth politics back home. He’s a district director of the Junior State of America, which engages kids through debates, model Congress and other activities. He’s an officer on the International Executive Board of United Synagogue Youth, the youth group of Conservative Judaism. And he writes for his school paper and the satirical paper, which he says he likes better.

“Whether it is going to shul and occasionally seeing a Supreme Court justice, or even growing up and just knowing you live right by D.C., growing up surrounded by politics, it really does have an effect on me,” he said.

Cohen wants to attend college after he graduates next year, and he knows that could be a challenge if he wins the election. But the teen is committed to Kansas — and can’t wait to see it for the first time.

“If I win governor of Kansas, we’ll see what schools there are in the area,” Cohen said. “It’ll be difficult to balance being a college student and governor. However, it is my promise to the people of the great state of Kansas that I will try my hardest.”