Lynne Landsberg, rabbi who sought a place for those with disabilities, dies at 66 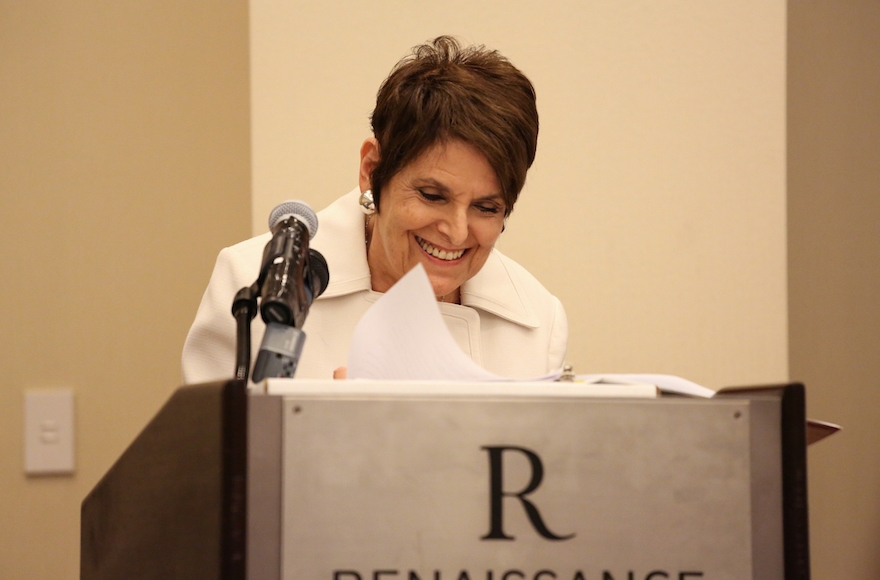 (JTA) — Rabbi Lynne Landsberg, who championed the cause of inclusion as the co-founder and co-chair of the Jewish Disability Network and as senior adviser on disability rights at the Religious Action Center of Reform Judaism, died Monday at the age of 66.

The cause was cancer, The News Leader of Staunton, Virginia, reported.

Landsberg was a pivotal figure in helping people with disabilities find a place within Jewish communities that intentionally or not had not been seen as welcoming.  She founded and co-chaired the Central Conference of American Rabbis’ Committee on Disability Awareness and Inclusion and co-founded and co-chaired Hineinu: Jewish Community for People of All Abilities. Hineinu was a rare collaboration of the Orthodox, Reform, Conservative and Reconstructionist movements, as well as Chabad.

She also served on the steering committee of the Interfaith Disability Advocacy Coalition, a coalition of  Christian, Jewish, Muslim, Hindu and other faith groups, according to the Religious Action Center.

In a speech accepting an honor from the Interfaith Disability Advocacy Coalition in 2015, she recalled the interfaith efforts that led to the passage of the Americans with Disabilities Act in 1990.

“A number of religious groups tirelessly advocated for the ADA,” she recalled. “However, after its passage, I was surprised to learn that due to pressure from other religious groups, whatever their reasons, houses of worship were, in fact, exempt from and therefore did not have to comply with significant portions of the ADA. Ultimately, because all of our religious groups, both pro and con, did not have the law looking over our shoulders, our congregations were all very slow to make necessary changes both physical and emotional.”

Landsberg would come to know firsthand the challenges facing those with disabilities: In 1999, a car accident left her with a traumatic brain injury. It was months before she could walk, talk, read or concentrate, and she required 24-hour nursing. Years of intensive rehabilitation followed.

During her recovery, she reflected on how a faith community helped her and could help others rebound from trauma.

“I believe the answer lies in three interventions, each informed by Judaism: directed prayer on my behalf, attentive visits, and practical support,” she wrote in a 2004 article for Reform Judaism magazine.

Raised on Long Island, Landsberg received her masters of theological studies from Harvard Divinity School. She graduated Hebrew Union College-Jewish Institute of Religion and was ordained in 1981.

She served as associate rabbi of Central Synagogue in New York City and as rabbi of Temple House of Israel in Staunton, Virginia and Congregation Beth El in Harrisonburg, Virginia.

Landsberg was associate director of the Religious Action Center from 1988-1996, where she focused on inter-religious affairs, black-Jewish relations and reproductive choice. She later served as regional director for the Union for Reform Judaism’s Mid Atlantic Region. She recently retired from the RAC, to which she had returned as a part-time senior adviser.

In 2009 she received an award from the Harvard Divinity School Alumni/ae Association given to a graduate who “exhibits a passionate and helpful interest in the lives of other people, an informed and realistic faithfulness, an embodiment of the idea that love is not so much a feeling as a way of acting, and a reliable sense of humor.”

“Rabbi Lynne Landsberg was a leader unlike any other,” said Rabbi Jonah Pesner, director of the Religious Action Center of Reform Judaism. “She was an unparalleled champion for people with disabilities, she united diverse groups within the Jewish community and across lines of faith to push for access and inclusion in religious communities and to make disability rights a priority for faith-based advocacy. Her personal courage and persistence have permanently changed the way the American Jewish community approaches issues of access and inclusion.”

She is survived by her husband, Dennis Ward, and a son, Jesse L. Ward.