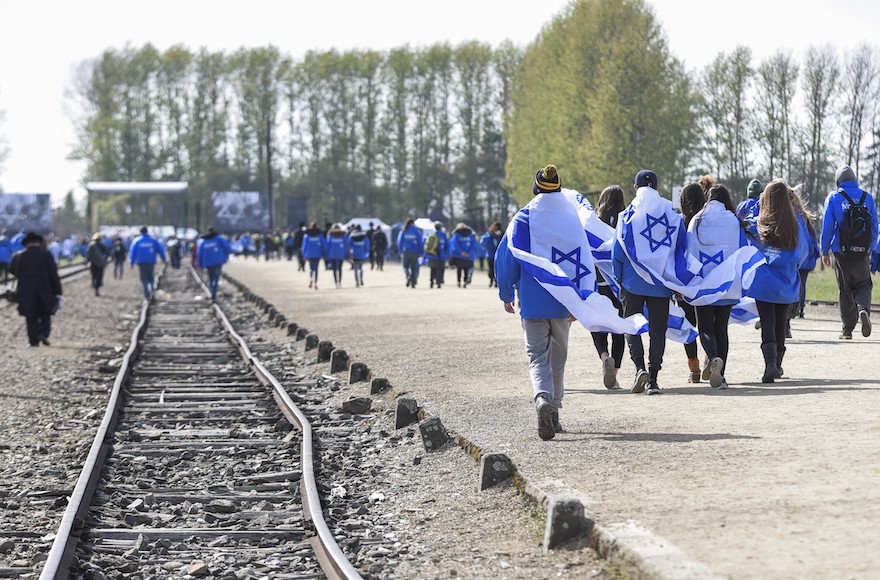 (JTA) — Three years ago, Shaul de Malach had no problem joining fellow educators from his country on a trip to former Nazi death camps in Poland.

Like tens of thousands of Israelis and Jews in the Diaspora who go on commemorative missions each year, de Malach “didn’t exactly relish the thought of visiting Auschwitz,” he told JTA Wednesday about his trip in 2015 as part of the Council of Youth Movements in Israel’s biennial seminar in Poland. “But I thought it was important for me to see as a Jew and a teacher.”

But de Malach has since changed his mind.

Following Poland’s passing this year of a controversial law that makes it illegal to blame the country for Nazi crimes, de Malach now promotes a boycott of Poland trips by the tens of thousands of members of the 99-year-old group he leads, Ezra.

In a letter January to Poland’s ambassador in Israel, he cited fear for visitors’ safety and what he called Poland’s “complicity” in the Holocaust, including by “Polish guards.”

De Malach’s letter may be selective and factually inaccurate (in addition to many informers in Nazi-occupied Poland, thousands of Poles risked their lives to save Jews. None of them served as guards in Nazi camps).

But it nonetheless illustrates how the row over the new law, which critics say whitewashes the role of Polish collaborators and hampers discussion about it, is causing some delegation organizers and participants to re-evaluate a pilgrimage with significant financial components that has connected Jews and Poles for some 30 years.

Other trip organizers are considering changes, including Rabbi Boruch Gorin, a senior aide to one of Russia’s chief rabbis, Berel Lazar. Lazar’s Chabad-affiliated Federation of Jewish Communities of Russia annually sends hundreds of young Jews to visit the former Auschwitz camp as part of its Eurostars program.

Gorin won’t consider a boycott of Poland, saying “We shouldn’t change how we commemorate our relatives to punish any political entity, these should be kept as two separate things.” But he spoke about other sites in Poland that could explore the complicated role of non-Jewish Poles during the Holocaust, where the Nazis killed 3 million non-Jewish Poles in addition to 3 million Jewish ones.  They include Jedwabne, where Polish villagers in 1941 butchered hundreds of Jews with little or no intervention by the Germans, and Kielce, a village where dozens of Jews who had returned from the camps were lynched and killed by locals in 1946.

“Maybe considering the assault on [the] historical record, it’s time to consider adding sites that are relevant to this cruelty by Poles to the list of destinations in Poland,” Gorin said.

Separately, Moshe Azman, a chief rabbi of Ukraine, is lobbying to have commemorative trips from Israel moved to Ukraine to punish Poland for its law on rhetoric about the Holocaust.

“Ukraine has many places fit for a March of the Living,” Azman wrote in January to Israel’s education minister, Naftali Bennett, “where Jews suffered and were murdered in a terrible tragedy.”

March of the Living is perhaps the best known purveyor of commemorative trips to Auschwitz for Jewish youth, and while it opposes the Polish law, it has no plans to discontinue or re-route its pilgrimages.

“Now, as much as ever, we believe our mission is of the utmost importance,” Phyllis Greenberg Heideman, president of International March of the Living, said in a statement Feb. 8.

March of the Living brings some 12,000 participants from all over the world for a commemorative march in April that has been taking place since 1988. The participants march almost two miles from the Auschwitz camp to the one at Birkenau, both in the same complex. Many of the participants pray. Hundreds wear Israeli flags, which organizers distribute to participants.

Aharon Tamir, deputy chairman of the March of the Living, said Ezra’s boycott of Poland trips is unusual and doubted there would be any significant decline in the number of Israelis and Jews visiting the country.

In addition to March of the Living, Israeli high schools are sending approximately 25,000 students annually on trips to Poland.

“There may be a few individuals who choose to stay away, but overall participation is only growing,” he told JTA. “If anything, the fight against this law, which I don’t agree with, only illustrates how important it is for Jews to come and preserve the memory of the Holocaust against any threat. We’re not considering stopping the march or even changing anything about it.”

The sheer impact of paying witness to the sites where the Holocaust took place may outweigh educators’ qualms about visiting or spending money in Poland. One recent participant in the Russian Eurostars trip, Sergei Atyeh Zolotov of the city of Khabarovsk in Russia’s Far East, said of the visit to Auschwitz: “It burned a hole in my soul. It made me feel what the Jewish tradition of survival and renewal is about.”

His reaction is typical of Russian visitors to the camp.

“Israelis’ first thought is often ‘thank God we have a country,'” said Gorin, the leader of Eurostars. “But Russian Jews often think first: ‘It could have been me who was murdered here.'”

The legislation in Poland, which Gorin called “insane,” is designed to “obscure the historical facts that many Poles showed unspeakable cruelty to Jews during the Holocaust, just as other people from other nationalities did.” 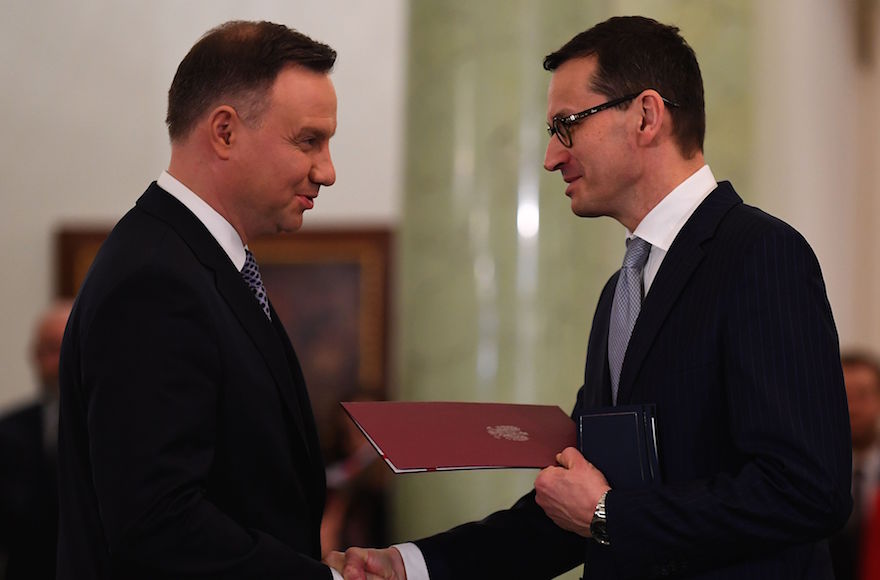 Gorin’s anger at the new law is shared by Israeli President Reuven Rivlin, who suggested it was intended to “subvert the memory of the Holocaust.” Prime Minister Benjamin Netanyahu also opposed it.

In a further deterioration in Israeli-Polish ties over the law, Netanyahu later condemned as “outrageous” the assertions by his Polish counterpart, who noted there were also “Jewish criminals” who participated in the Holocaust. An Israeli government delegation was in Poland this week for a meeting with representatives of Poland’s ruling party, the nationalist Law and Justice, which championed the law.

Those suggesting alternatives to Poland for those wishing to commemorate the Holocaust include Yoram Yovel, a well-known psychiatrist and columnist for Israel’s Ynet news site. He supports dropping commemorative trips in Europe for domestic excursions to Israel’s many Holocaust museums and communities founded by survivors.

“It’s time to come home from anti-Semitic Europe,” wrote Yovel, who is a son of the late influential philosopher Yeshayahu Leibowitz.

But other sites could be complicated as well.

Changing Poland for Ukraine makes “little sense,” Gorin said. Ukraine’s  government has been accused of venerating war criminals and downplaying their complicity in the Holocaust in the name of rising nationalism.

Ukraine also has laws, passed in relative silence in 2015, that criminalize “insulting the honor” of militiamen who collaborated with the Nazis — including in murdering Jews. The Nazis recruited Ukrainians to help with the business of murdering Jews — unlike in Poland, whose citizens were not allowed to carry arms or organize themselves in military frameworks.

Azman wrote that the switch would be a “fine” imposed against Poland — an obvious reference to the millions of dollars brought in by people who come on delegations to Auschwitz.

Indeed, since the fall of communism in Poland, a major tourism industry has evolved around Holocaust. Over a million people each year visit the Auschwitz museum near the southern city of Krakow. Several hotels have been built near the former death camp, and locals from the nearby town of Oswiecim charge Western prices for apartments on the Airbnb hosting website.

And some think that, if anything, such trips instill misplaced hostility toward the Poles for what was a German Nazi enterprise.

“These trips take teenagers to Poland and dump them at Auschwitz, where many of them have scarring emotional experiences,” said Tomer Keret, an Israeli tour guide from Jerusalem with Polish roots.

“Of course they associate the Holocaust only with Poland, which they blame for the genocide,” he said. “Then when they’re older they enjoy dancing in discotheques in Berlin.”

Any commemoration trip to Europe, Keret said, “needs to focus on Germany, the nation that is beyond question responsible for the Holocaust.”