In outreach to progressives, AIPAC airs a hearty endorsement of the two-state solution 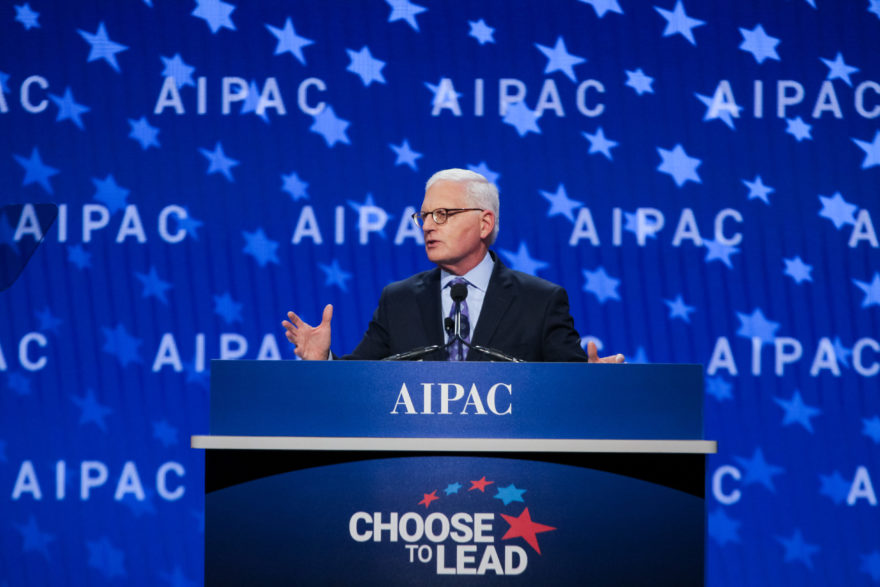 WASHINGTON (JTA) — The American Israel Public Affairs Committee opened its arms to progressives this week, launching its annual policy conference with direct appeals to pro-Israel liberals who have lately considered the lobby an unwelcoming extension of Israel’s solidly right-wing government.

In addition to major speeches and smaller sessions devoted to bipartisan outreach, there was a surprisingly forthright endorsement of the fading two-state solution from the organization’s executive director.

“To my friends in the progressive community, I want you to know we are partners in this project,” AIPAC President Mort Fridman said Sunday at the launch of this year’s conference at the convention center here.

AIPAC is contending with a Jewish community that polls show is deeply unhappy with the Trump administration and its Republican allies in Congress. Jews who have achieved maturity — and voting age — in the past decade have known only an Israeli government led by Prime Minister Benjamin Netanyahu that has been at odds with the president favored by the vast majority of Jews, Barack Obama.

So from the get-go, AIPAC has rolled out the welcome mat for progressives — to the degree that the AIPAC’s leadership could manage such a thing. There are plenty of obstacles to AIPAC making its tent wider: Its rank and file, judging from the applause, remains partial to conservatives, and the progressive movement remains deeply suspicious of a lobby they see as identified with hostility to Obama and the right-wing policies of Netanyahu.

Which may explain why for the first time in memory — possibly in the lobby’s history — AIPAC appeared to get ahead of both the U.S. and Israeli governments of the day in pressing for a peace deal.

“We must all work toward that future two states for two people, one Jewish with defensible borders and one Palestinian, with its own flag and its own future,” Howard Kohr, AIPAC’s executive director, said in a speech Sunday evening (one albeit delivered after much of the conference had departed for dinner or for the Jewish meet-and-greets that traditionally crop up around AIPAC conferences).

It was a stunning declaration at a time when both President Donald Trump and the Netanyahu government have retreated from explicit endorsement of a two-state outcome. Moreover, while Kohr demanded “defensible” borders, he made no mention of what for years has been a bedrock of Israeli government and AIPAC rhetoric: demilitarization of the Palestinian state.

Kohr also sounded a note that could have come from J Street, the liberal Mideast lobby that presents itself as an alternative to AIPAC: Security, he said, is illusory without peace deals.

“I am astounded as to why such a great, meaningful organization as AIPAC, whose raison d’etre is pro-Israel advocacy in the United States, would present the positions of the State of Israel (and of the U.S.) so inaccurately before senior government officials, senators and congressmen, and the general pro-Israel public,” Yossi Dagan, the head of the Samaria regional council, wrote in a letter to AIPAC, reported The Jewish Press.

To be sure, Kohr made his pitch with the traditional AIPAC caveats: The Palestinians were primarily if not wholly at fault for the lack of movement because they would not agree to direct negotiations. (Netanyahu wants direct talks; the Palestinians say that an arena that keeps away international pressure on Israel places them at a disadvantage.) And Kohr notably made no mention of settlements. Avi Gabbay, the new Labor Party leader in Israel, earlier Sunday received only tepid applause with his call to remove settlements deemed illegal under Israeli law.

A key theme of the conference — and of its legislative agenda — was using laws to push back against the Boycott, Divestment and Sanctions movement targeting Israel. The laws would allow state and local governments to block entities that support BDS from doing business with the state through pensions and contracts. Progressives have come out against the state BDS laws and those proposed for Congress because they see it as inhibiting free speech. Liberals also object that the laws almost uniformly target not just entities that boycott Israel, but those that boycott settlements as well.

And AIPAC stood strong in its continued disdain for the 2015 Iran nuclear deal that Obama negotiated. On Sunday, a panel on the agreement featured a top AIPAC official, Brad Gordon; U.S. Rep. Ileana Ros-Lehtinen, R-Fla., and a former congresswoman, Jane Harman, a Democrat. All were opposed to the deal. AIPAC’s legislative agenda included a bill that would enhance sanctions on Iran as a means to force compliance with policies not included in the 2015 deal, which trades sanctions relief for a rollback of Iran’s nuclear program.

AIPAC officials made clear that the organization was reaching out to the left but not closing out the right.

Fridman said maintaining bipartisan support for Israel was critical in a polarizing time.

“People are angry and hurting and frustrated and fed up,” Fridman said. “There’s an impulse to walk away from politics to retreat to partisan corners and to demonize the other side. We cannot let those impulses win the day.”

AIPAC has been buffeted in recent years by tensions between Israel and Democrats during the previous administration. It is striving to rebuild bipartisan support at a time when Trump has made good on promises that AIPAC has had on its agenda for years: recognizing Jerusalem as Israel’s capital, and seeking to alter the Iran nuclear deal.

Fridman’s thanks to Trump for those policies earned extended applause.

At the same time, Trump has meager approval ratings among American Jews, most of whom vote Democratic and are repulsed by the bigotry they perceive in his rhetoric and policies, and his projected rollbacks of social safety nets. On Monday, Trump is due Monday to meet with Netanyahu, who has been effusive in his praise of the U.S. leader.

Winning back a majority progressive Jewish community to its fold was nonetheless the overwhelming focus of a slew of breakouts with titles like “Foundations of Pro-Israel Progressive Activism.” A session on Zionism and feminism drew a packed room. (Most AIPAC breakout sessions like these are closed to the media. New York’s Jewish Week editorialized last week that it would not be sending reporters to the conference to protest the closed-door policy.)

The progressive agenda also featured prominently on the main stage. One of the keynote speakers on Sunday morning was former Michigan Gov. Jennifer Granholm, a Democrat, who called Israel a “progressive paradise” because of its support for women’s rights, LGBTQ rights and its subsidies for health care and parental care.

“Israel can be a role model for other nations including America showing how citizens are cared for,” said Granholm, who received a standing ovation.

“We should do the exact opposite of what BDS supporters advocate,” Hod said. “We should provide a space for the multiplicity of voices.”

It was a theme Kohr advanced the evening before.

“Know this: We in the pro-Israel movement will ask you to do many things, but we will never demand that you change anything about yourselves, we want you the way you are,” he said. “Whatever your politics or struggle, the color of your skin, the language that you speak, the faith you hold close, no matter whom you love, we want you.”

Another issue sowing tensions between Israel and American Jews is Netanyahu’s reneging on pledges over the years to improve the status of non-Orthodox Jews in Israel. Ambassador Ron Dermer told the AIPAC crowd that he expected “good news” later this year on allowing organized non-Orthodox prayer at the Western Wall, one of Judaism’s holiest sites.

An estimated 18,000 activists are attending the conference, which culminates in a Capitol Hill lobbying day on Tuesday. On AIPAC’s legislative agenda is introducing new Iran sanctions as a means of toughening the 2015 deal; codifying into law a pledge of $38 billion over 10 years in defense assistance Obama promised in his waning days in office; and support for measures that would set penalties for compliance with boycotts of Israel and Israeli settlements in the West Bank.