Netflix included her in a documentary about leaving Orthodox Judaism. They didn’t say she was gay. 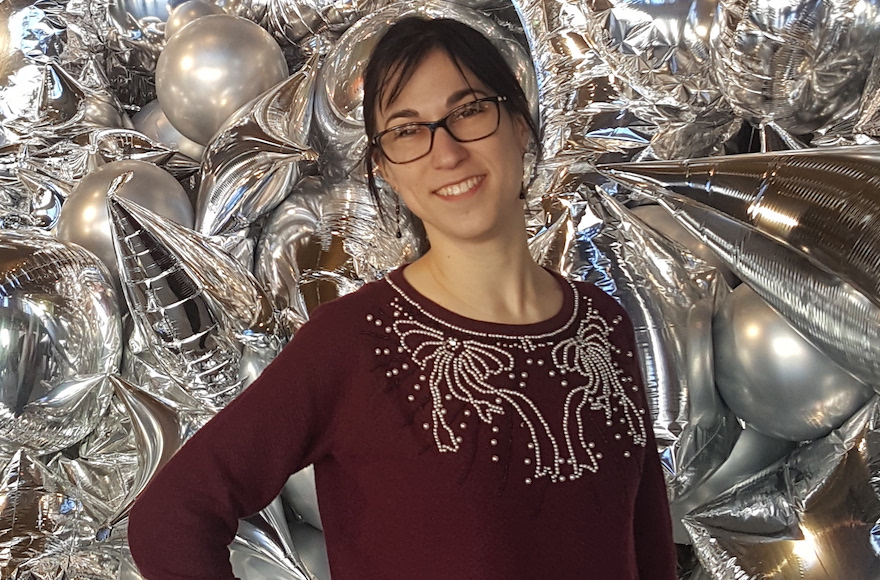 Etty Ausch said her sexuality was cut from Netflix's "One of Us." (Courtesy of Ausch)
Advertisement

NEW YORK (JTA) — A woman who was featured in a hit Netflix documentary about former Orthodox Jews says the fact that she was openly lesbian was cut from the film.

Etty Ausch, 33, is one of three people who tell their stories of leaving the Brooklyn Hasidic community in “One of Us,” which was released in September. The acclaimed film, directed by Heidi Ewing and Rachel Grady (both of “Jesus Camp” and “Detropia”), shows Ausch’s custody battle over her seven children with her former husband, whom she describes as abusive. It alleges that the Hasidic community bands together, harassing her and raising money for her former husband’s lawyer.

It also shows Ausch slowly breaking away from Orthodox Judaism, eschewing long skirts and a wig for pants and her natural hair, which was shaved according to a Hasidic custom.

But there was one significant detail left out of the story, Ausch revealed to JTA last month. Years earlier Ausch had come out as a lesbian, and at the time of filming she was openly dating a woman. The filmmakers were aware of this and shot footage of Ausch with her girlfriend, but that part of the story was left out in the editing process. Ausch said the filmmakers told her that Netflix made the decision.

“They filmed, and I was openly gay in the film, and Netflix made them take it out and when they told me about it I was like ‘OK,’ but I didn’t get a choice. It wasn’t like I could say ‘no’ or ‘yeah,'” she told JTA over coffee at a Midtown Manhattan cafe.

Neither the film production company, Loki Films, nor Netflix responded to JTA requests for comment.

“It was such an important part of who I was because all the years that I was married, my then-husband knew I was gay,” Ausch said. “He was actually the one who told me when I didn’t know what gay was, and that there was such a thing that women have attractions to other women.”

She said her husband urged her to get treatments that promised to get rid of her same-sex attractions.

“We went through all the motions of seeing rabbis and getting treatments to fix it, so he knew and the way I was treated by him was very much the reason why I left,” Ausch said. “He wasn’t very accommodating or understanding.”

Ausch lives now with her girlfriend, Sarah, in New Haven, Connecticut. In an essay published by the young women’s site Refinery 29, Ausch wrote about meeting Sarah at a support group for Jewish LGBTQ women. She is close to finishing an associate’s degree in criminal justice at the Borough of Manhattan Community College and hopes to transfer to a four-year college in the fall. Her long-term goal is to attend law school and defend minority and vulnerable groups, including the LGBTQ community and women.

“Being able to be a voice for other people is important to me,” she said.

Though Ausch went through the experience herself, she does not want to defend others who are leaving Orthodoxy.

“There’s a huge need for it there,” she said, “but knowing what it is like when I went through it there and the lack of justice, having this whole bloc voting system where they vote people into court and they basically have no standing chance — I don’t want to go up against something I can never win.”

The film suggests that a local court favored Hasidic Jews in Brooklyn, where haredi Orthodox Jews tend to vote their community’s interests in local elections. Elected officials have been accused of pandering to the Orthodox vote on issues like reporting sexual abuse or a controversial circumcision practice called metzitzah b’peh.

“They’re trying to keep me out of the children’s lives just because I am not religious,” she said. “They think I’m a bad influence and all that.”

During the interview last month, Ausch was trying to schedule a time to see her children later in the week. She later told JTA that the visit did not happen.

“My hope is so low, if I can work it out, it will be great, but if they just don’t want to make it happen, I won’t be surprised,” she said at the time.

The film chronicles the lives of Ausch and two other former Hasidic Jews, Luzer Twersky, 32, and Ari Hershkowitz, 20, as they deal with the fallout of leaving their communities and try to adapt to a secular lifestyle. Twersky, who left behind his wife and children when he decided to stop being religious, is seen trying to make it as an actor.

Since leaving his Hasidic community, Twersky has appeared in various roles, including on the hit show “Transparent” and in a Yiddish production of “God of Vengeance.” In the film Hershkowitz, who says he was sexually abused as a child, struggles with drug addiction and leaving behind a life of familiarity. He told JTA that he is now working in technology and is planning to start college in the fall.

Ausch has only watched “One of Us” two or three times, she said, because it brings up bad memories. Following the film’s release, she was invited to speak to the audience after screenings. She always waited outside when the film played because she found it too difficult to watch and then answer questions.

“It’s hard for me to see what that year was like and how hard it was and how I really really tried and how I kept hoping for things to be very different, and things looked pretty good for me for a while because I had custody of them for a year,” Ausch said.

Being away from her kids and the experience of leaving the Orthodox world still weigh heavily on Ausch every day.