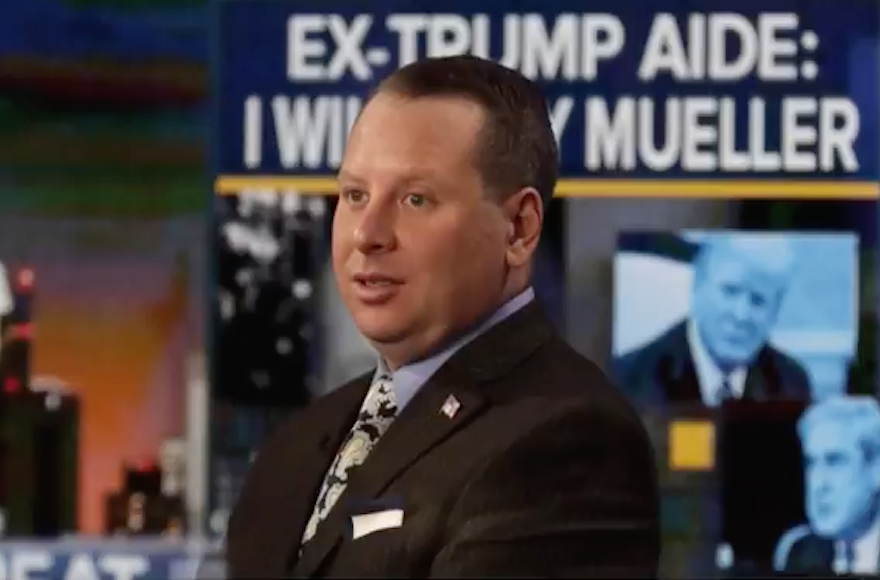 (JTA) — Former Trump aide Sam Nunberg said he will ignore a subpoena to appear before a federal grand jury investigating Russian interference in the 2016 presidential election.

Nunberg, who was fired by the Trump campaign in the summer of 2015 over racist Facebook posts, told The Washington Post on Monday that he was asked to appear Friday before the grand jury. According to the newspaper, he also sent an email list from the office of special counsel Robert Mueller requesting his appearance.

The subpoena seeks correspondence and “records of any kind” related to President Donald Trump and nine others, notably two former top advisers to Trump, Steve Bannon and Roger Stone.

Nunberg said he would provide neither testimony nor documents.

“Let him arrest me,” Nunberg told The Washington Post in an interview. “Mr. Mueller should understand I am not going in on Friday.”

He added: “The Russians and Trump did not collude. Putin is too smart to collude with Donald Trump.”

It is not known what actions Mueller would take if Nunberg, who is Jewish, follows through on his vow not to appear.

“Donald Trump won this election on his own,” Nunberg told The Post. “He campaigned his ass off. And there is nobody who hates him more than me.”

Later Monday, Nunberg in an interview on MSNBC again said he would not appear before the grand jury. He also suggested that Mueller may have evidence against Trump.

“I think they may,” Nunberg said, according to The Washington Post. “I think that he may have done something during the election.”

In response, White House press secretary Sarah Huckabee Sanders told reporters, “There was no collusion with the Trump campaign.”

Nunberg was a consultant to the Trump campaign before he was dismissed for his racist and incendiary posts, which included calling the daughter of the Rev. Al Sharpton’s daughter “N—!” The posts had been made in 2007, before he went to work for Trump.

In a 2017 interview with Newsmax, Nunberg said his grandfather Simon survived Auschwitz but that the rest of Simon’s family, including his parents, were murdered. Asked where he might move if he had to live in another country, Nunberg replied, “Easy question — the Jewish State of Israel.”