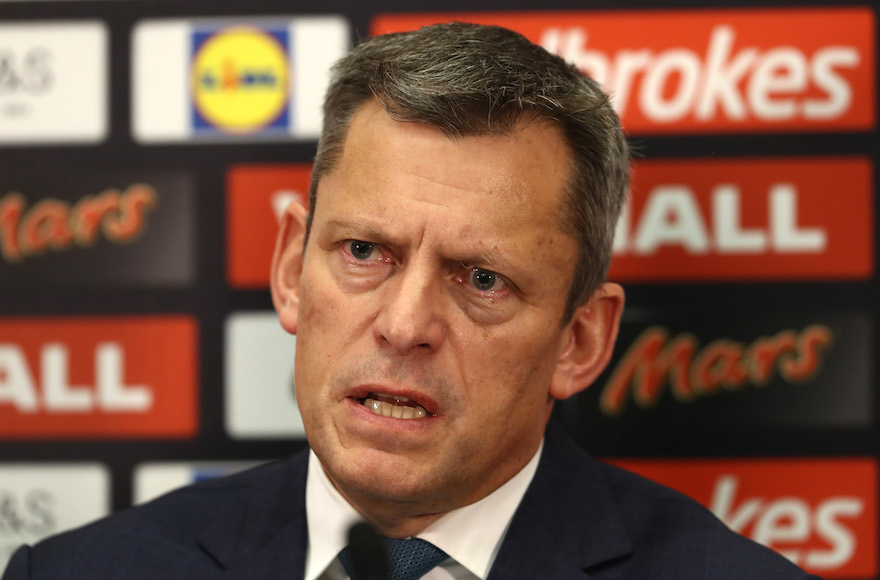 (JTA) — The head of England’s governing body of soccer apologized for conflating the Star of David and the Nazi swastika.

Martin Glenn apologized on Monday for the statement he made a day earlier after Manchester City team manager Pep Guardiola wore a yellow ribbon in support of Catalan independence, violating a Football Association rule that forbids the display of political symbols.

Glenn said he was sorry for including the Star of David among a list of offensive symbols.

“I would like to apologize for any offence caused by the examples I gave when referring to political and religious symbols in football, specifically in reference to the Star of David, which is a hugely important symbol to Jewish people all over the world,” he said.

Glenn said he would personally apologize to the Jewish Leadership Council.

A day earlier, he said: “Things like a poppy are OK but things that are going to be highly divisive are not. And that could be strong religious symbols, it could be the Star of David, it could be the hammer and sickle, it could be a swastika, anything like Robert Mugabe on your shirt, these are the things we don’t want.”

Simon Johnson, the chief executive of Britain’s Jewish Leadership Council, said following Glenn’s statement on Sunday: “The Star of David is a Jewish religious symbol of immense importance to Jews worldwide. To put it in the same bracket as the swastika and [former Zimbabwe leader] Robert Mugabe is offensive and inappropriate.”