He’s the Jew who inspired the PLO declaration of independence. Now he wants to take down AIPAC. 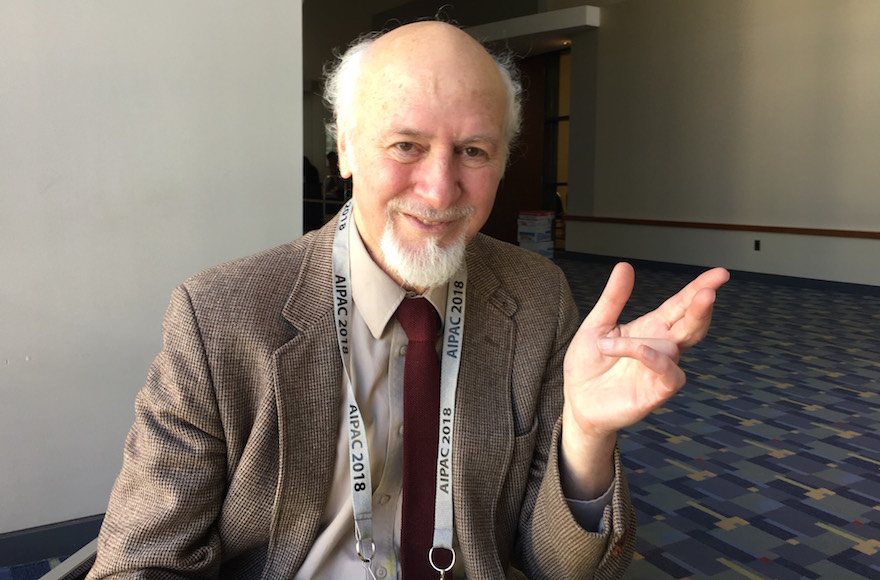 WASHINGTON (JTA) — Thirty years ago, Jerome Segal made headlines in Israel and the United States with an odd pedigree: He was the committed Jew who wrote the Palestinian declaration of independence.

That was never quite accurate — the University of Maryland professor of philosophy wrote an op-ed for a Palestinian newspaper from which the Palestine Liberation Organization appears to have cadged a good portion of its 1988 declaration  — but it didn’t keep the Israeli media from calling him “The Palestinians’ Jewish Herzl.”

Now he has cast himself in another unlikely role: A Bernie Sanders-style contender for the U.S. Senate seat in Maryland currently held by Ben Cardin. Segal believes that if he tops Cardin in the Democratic primary, he can show that the American Israel Public Affairs Committee is not as all-powerful as some believe.

Perhaps counterintuitively, Segal was making his case this week at AIPAC’s annual policy conference, having paid the $599 entry fee.

During an interview Sunday in the halls of the Washington Convention Center, Segal recalled his 15 minutes of fame following his role in the Palestinian declaration of independence, which per his recommendation included recognition of Israel. In its wake, he launched the Jewish Peace Lobby as a counter to AIPAC.

“More like three years of Warholian fame,” he said.

And then the Jewish Peace Lobby followed the long list of American Jewish dovish groups that tended to land with a bang and then retreat to the margins of the Jewish community, if not disappear altogether — at least until J Street’s emergence in 2008.

“We had 400 rabbis, 5,000 members and accomplished almost nothing on the Hill,” Segal said with a wistful smile.

Nonetheless, Segal made a historic difference: The fact of a pro-Israel Jew meeting with PLO chief Yasser Arafat paved the way for actual Israelis to meet with Arafat, a process that led to the backchannels that culminated in the 1993 Oslo Accords.

Now 74, a pancreatic cancer survivor and lanky energetic presence, Segal wants to show that a politician’s closeness to AIPAC isn’t all that it’s cut out to be. Segal insists that a loss for Cardin, a fellow Jew, would be seen as a setback for AIPAC: Maryland’s senior senator is among the Democrats most closely associated with the pro-Israel lobby.

It’s a far-fetched strategy based on Segal’s resemblance to Sanders, the Independent senator from Vermont who mounted a surprisingly strong challenge to Hillary Clinton for the Democratic presidential nomination in 2016.

Segal casts the resemblance as one of ideology, style and, perhaps a little weirdly, biography, as if elderly Jews with hardscrabble roots in the New York boroughs were the next big thing.

“I’m an old lefty,” he said. “He’s from Brooklyn, I’m from the Bronx. We both have immigrant fathers from Poland, our mothers were born here. My books overlap with Bernie’s political agenda.” Segal boasts a library shelf full of books on philosophy, the economy and Middle East peace.

He leaned over to make the even Bernier than Bernie point: “He’s a socialist,” Segal said. “I grew up a socialist.” Sanders, he said, came to socialism late, in university.

According to Segal, that secures the 34 percent of Maryland Democrats who voted for Sanders. How he gets from there to 50 percent plus one vote is a little more convoluted. He aims to peel away from Cardin not only the Sanders voters, but those who pulled the lever for Clinton because she would have been the first woman president and had a reputation for competence.

Then, and this is a little hard to understand, although a reporter asked multiple times: Segal gets the anti-NRA vote even though Cardin does not in any way stand with the National Rifle Association or the gun lobby, and has been an outspoken advocate of gun control.

Segal’s argument: Just as there is momentum following last month’s deadly high school shooting in Florida to take down the NRA, the same zeitgeist can be tapped to take down AIPAC.

“If we can beat AIPAC in Maryland, we can beat the NRA in America,” he said. “Both of them are the expression of big money in American politics.”

Segal pointed out that Cardin is aligned with AIPAC on almost every issue, even those that the majority of other Democrats reject. Cardin was among a handful of Senate Democrats who opposed the 2015 Iran nuclear deal. He is among the lead sponsors of a bill that would penalize compliance with boycotts of Israel. The measure is having trouble gaining traction among Democrats, in part because of free speech concerns and because it targets those who solely boycott Israeli settlements.

“I don’t support BDS,” Segal said, referring to the Boycott, Divestment and Sanctions movement targeting Israel. “But criminalizing someone who wants to support a boycott of Israeli settlements?”

Segal, like any politician, speaks assuredly of winning, but after a while acknowledges — at least implicitly — that he would be happy if he made a point. Get to 40 percent of the vote on a platform that includes opposition to AIPAC, he said, and it could make it less appealing for middle-of-the-road Democrats to solicit AIPAC’s support.

“No one has ever threatened the career of any sitting member of Congress because he’s run with AIPAC,” Segal said, relishing the prospect of being the first. (AIPAC does not endorse candidates, but its members are keenly aware of which candidates embrace the lobby’s policies and which do not.)

He says his platform will emphasize the bread-and-butter issues that Marylanders who do not track the nuances of Israel policy — the vast majority of them — care about. That includes income inequality and the parlous state of Baltimore’s inner city (an issue Cardin also addresses frequently).

Segal projects he will need $5 million to $10 million to challenge Cardin. (Republicans are not competing this year.) He says he is ready to spend up to $500,000 of his own money. He has a website that thus far has little more than his contact information. Segal has paid the $240 to run in the primary (as have a handful of others, including Chelsea Manning, the former U.S. Army intelligence analyst convicted of espionage in 2013 for her role in leaking troves of classified information).

He may also need to bone up on what makes AIPAC run. A reporter checked in with Segal again a day or so into the policy conference.

“I know AIPAC in terms of policy, I’ve never seen it as a culture,” he said of the encounters he had with young American Jews who were thrilled to be at the conference. “It’s amazing. The Palestinians don’t get mentioned, the settlements don’t get mentioned. It’s like they’re discovering Israel — but Israel of the 1950s.”