In Israel, Netanyahu is embattled. At AIPAC, he was at home. 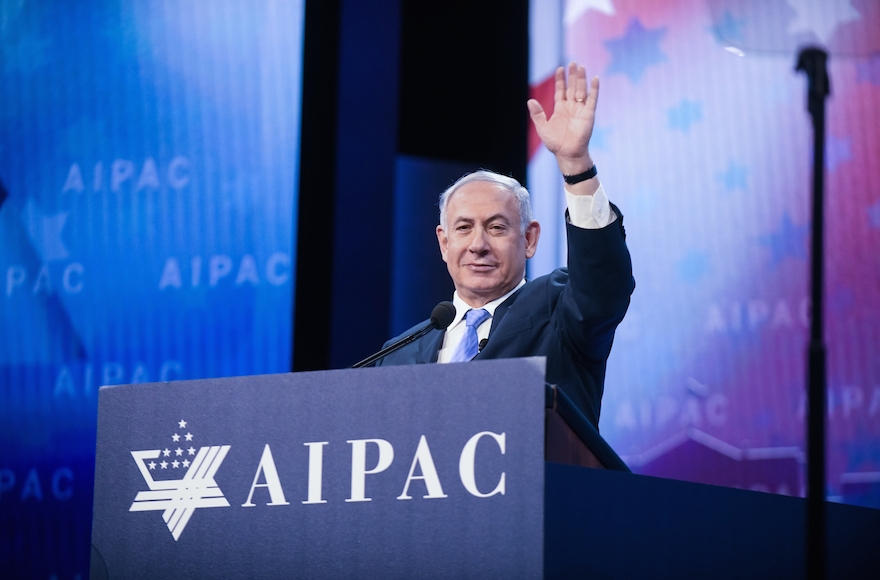 But you wouldn’t know it from his speech Tuesday at the annual conference of the American Israel Public Affairs Committee: He looked energized and right at home.

His address to the crowd of 18,000 played more like a pep rally than a policy address. Netanyahu largely stuck to his standard talking points — celebrating Israeli innovation, confronting Iran, criticizing the Palestinian Authority.

But he was upbeat and relaxed while doing it. He grinned, laughed, joked, involved the crowd, walked around the stage. If Netanyahu did have a script, he went off it.

“Four thousand students — thank you for cutting class to be here!” he said near the beginning of the speech. “If any of you needs a note, you can see me later. There’s a line forming outside.

“I don’t want to stand behind this podium, OK?” he said seconds later. “What the heck? I’m the prime minister!” The crowd cheered and clapped as he began walking around the stage.

Late in the speech, a woman yelled “We love you, Bibi!” He responded, “That’s very kind of you, thank you. … Who planted her?”

Much of the speech was, essentially, a PowerPoint presentation about Israeli tech and economic development that would have felt just as appropriate at a local Israeli economic mission. Netanyahu guided the crowd through slides on his country’s agricultural innovation, its place among a ranking of the world’s most valuable companies, a recent history of Israeli autonomous vehicle startups, a line chart showing rising investment in Israeli cybersecurity startups and so on.

“Free market principles unleashed the spark of genius embedded in our people,” he said. “Israel is changing the world in India, in Africa, in Asia, in Latin America.”

Netanyahu was no less defiant about his diplomatic record. Only briefly mentioning the Palestinians, Netanyahu as he has before touted his outreach to Latin America, Asia and Africa. He dismissed fears of international pressure on Israel.

“People talked about Israeli isolation,” he said. “Pretty soon the countries that don’t have relations with us, they’re going to be isolated. There are those who talk about boycotting Israel. We’ll boycott them.”

And he praised President Donald Trump, with whom he met on Monday. He thanked the American leader, as many other speakers did, for his recognition of Jerusalem as Israel’s capital and his promise to move the U.S. Embassy there in May. He also praised Trump’s hard-line stance against Iran and the president’s promise to amend the 2015 agreement curbing Iran’s nuclear program, which Israel and AIPAC said was flawed. And, of course, Netanyahu vowed to prevent Iran from acquiring nuclear weapons.

“We will never let Iran develop nuclear weapons,” he said, adding that if the United States ends up withdrawing from the agreement, “Israel will be right there by America’s side, and let me tell you, so will other countries in the region.”

As he has many times before, Netanyahu stressed the common interests that Israel shares with other countries in the region, and he said Israel desires peace with all its neighbors, including the Palestinians. But he criticized Palestinian Authority President Mahmoud Abbas for praising terrorists, and for the P.A.’s policy of delivering stipends to terrorists in Israeli prisons.

“President Abbas has to embrace peace and to stop supporting terror,” Netanyahu said, then turned to the crowd. “Raise your hands if you agree with me that President Abbas should stop paying terrorists who murder Jews.”

AIPAC wrapped up the proceedings Tuesday morning at the Convention Center before delegates fanned out to lobby their senators and members of the House on Capitol Hill. AIPAC’s legislative agenda includes a bill that would enhance sanctions on Iran as a means to force compliance with policies not included in the 2015 deal, which trades sanctions relief for a rollback of Iran’s nuclear program.