Curing infertility after chemotherapy: This Israeli-Arab scientist may have the key 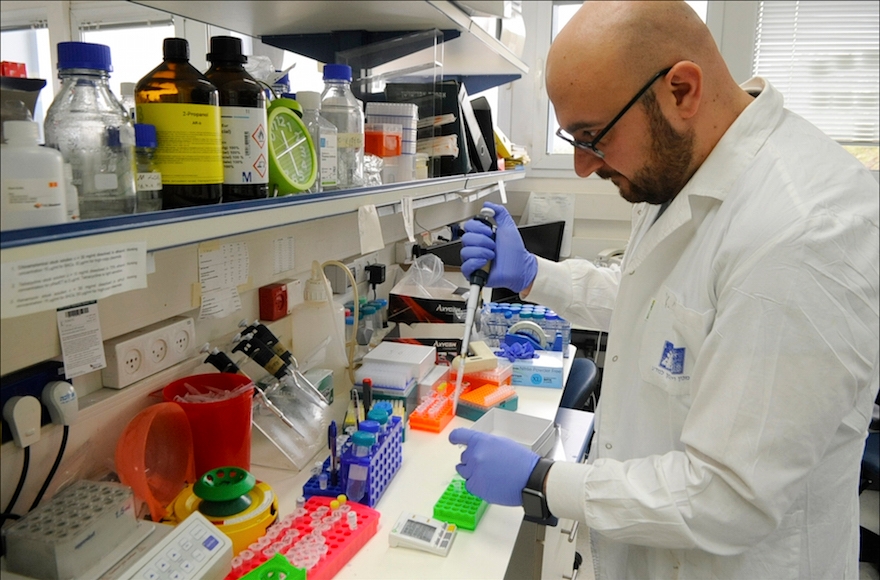 As an Israeli-Arab scientist, Hanna is an ambassador of sorts, with 15 researchers working under his direction, including scientists from Austria, Mexico and Russia. (Larry Luxner)
Advertisement

REHOVOT, Israel — When Jacob Hanna announced to his family that he planned on becoming a doctor, nobody was surprised.

Both Hanna’s father and grandfather were the town doctors in Rameh, the hilltop Christian-Druze village in Israel’s Galilee where Hanna was born and raised. His mother was a high school biology teacher, and Hanna and his three sisters studied medicine at the Hebrew University of Jerusalem.

But what neither Hanna nor his sisters could have foreseen was that Hanna, now 38, would devote his career to research in a relatively new field that, among other things, holds the promise of restoring fertility to cancer survivors rendered infertile by chemotherapy.

Hanna is a senior scientist in the Department of Molecular Genetics at the Weizmann Institute of Science in this central Israeli city, where he’s a pioneer in studying induced pluripotent stem cells. IPS cells have the potential to regenerate living tissue removed due to cancer or damaged as a result of chemotherapy. Replacing that lost tissue is one of the major challenges to cancer patient recovery.

“It’s very hard to find transplants because you need a donor, which is usually limiting, and also you need to match DNA,” Hanna said.

Often the DNA is not an exact match. Even when it is, patients must go on steroids and immuno-suppressants so the body does not reject the transplanted tissue. Ideally, Hanna said, patients would get their lost tissue back from cells that have their exact DNA through custom or personalized cell therapy.

IPS cells, equivalent to cells in the first stages of a human embryo, are a vehicle for achieving that. Researchers in Japan discovered IPS cells 11 years ago.

“Because they give rise to an entire embryo, these cells have the potential to make any type of cell in the body,” Hanna said. “We can generate an entire mouse from them.”

Hanna does that by expressing certain proteins usually found in the human egg and then imposing them on a skin cell. After two weeks it becomes an embryonic stem cell.

“We can do this from a 1-week-old baby or a 120-year-old man,” Hanna said. “We could take a hair from his skin or a drop of blood and make IPS cells that are from that patient and that have exactly his DNA.” 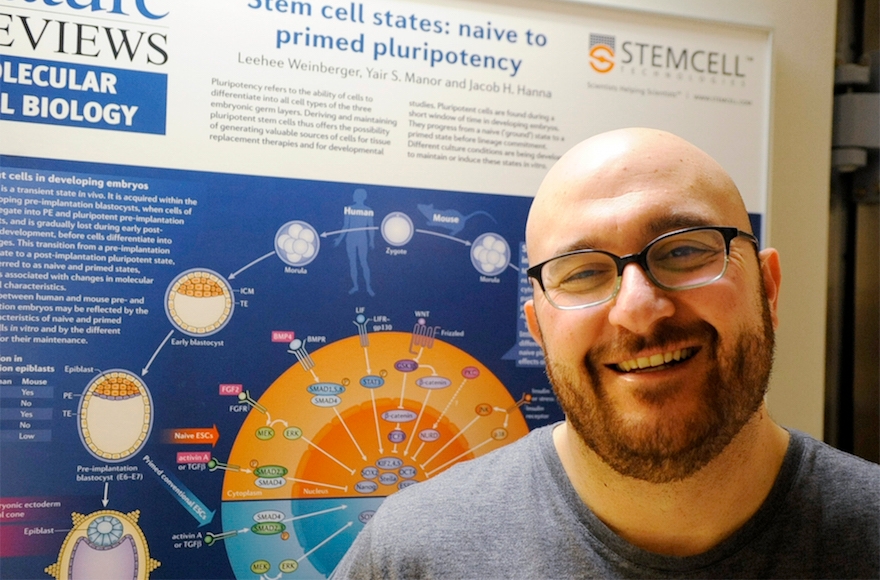 Jacob Hanna is doing pioneering work in the study of induced pluripotent stem cells, which have the potential to regenerate living tissue removed due to cancer or damaged as a result of chemotherapy. (Larry Luxner)

For now, the only proven stem-cell therapy in use focuses on transplanting bone marrow. Yet the concept offers infinite possibilities. Hanna specializes in using stem cells to make female eggs. Theoretically, IPS can help produce an unlimited supply of female eggs by growing stem cells in a dish and freezing them for years. That would allow doctors to do treat female patients with chemotherapy without worrying about damaging their fertility.

“Infertility is a major problem these days because you have a lot of young patients who are cured from cancer, but chemotherapy and radiation really reduce their fertility,” Hanna said. “Any type of chemo hurts the ovaries, whether it’s for leukemia or breast cancer. Nobody else is working on this in Israel, and very few worldwide.”

Hanna spoke as he offered a tour of his 2,000-square-foot lab, which occupies nearly the entire basement floor of the Weizmann Institute’s Meyer Building. Custom-built with a $5 million donation from the French businessman-philanthropist Pascal Mantoux and his wife, Ilana, the Hanna lab is filled with dedicated microscopes, in-vitro fertilization equipment and laboratory mice.

As an Israeli-Arab scientist, Hanna is an ambassador of sorts, with 15 researchers working under his direction, including scientists from Austria, Mexico and Russia.

“We are the United Nations of cancer research,” he said.

Hanna has published more than 80 scholarly articles in scientific periodicals, and framed covers from Nature, Science and Cell Journal grace the hallways of his lab. He has also received dozens of academic awards and honors, and over the past five years alone has given more than 60 lectures in 21 countries, from Slovenia to Singapore.

Hanna’s career was jump-started in part by a crucial grant from the Israel Cancer Research Fund, an organization that raises money in North America for cancer research in the Jewish state. Just months after joining the Weizmann Institute in 2011, Hanna received a Research Career Development Award from ICRF that provided $35,000 per year for three years — later it was renewed for an additional three years. A few months ago, Hanna was granted a seven-year ICRF Cancer Research Professorship that provides $50,000 annually to fund his research on fertility and cancer patients.

“The ICRF grant was the first I ever got, which was important so I could get other grants,” Hanna said. “And now I have an advanced research professorship, which as a seven-year grant helps carry out long-term projects. Our research is very cost intensive and also high risk, so we are really in desperate need of all the financial support we can get. ICRF funding has been very critical for me.”

Hanna decided to make cancer research his focus while in medical school.

“Right after high school, I took a year off and went to the U.S.,” said Hanna, who spent the year in San Diego, Seattle and the suburbs of Washington, D.C. “Usually, medical school is seven years, but halfway through I felt I wanted to do something else, so I decided to also get a Ph.D. in immunology. That turned my seven years into nine years.”

After earning his doctorate at Hebrew University and spending four years in post-doctoral studies at MIT, the newly minted Dr. Hanna returned to Israel in 2011 to inaugurate his own lab at the Weizmann Institute.

One of the benefits of IPS cell technology is that human embryos are no longer needed to generate the stem cells, helping sidestep the ethical debate about the morality of using such embryos.

“Unfortunately, this type of research is very cost intensive,” said Hanna, estimating his lab’s operating expenses at $1 million a year.

Aside from the ICRF, Hanna also has been funded by the European Research Council, the Helmsley Foundation and the Israel Science Foundation.

So far, IPS work is still limited to the research lab, but the first clinical trials in IPS techniques are going to start next year in the United States, Sweden and the United Kingdom for Parkinson’s patients.

“Nobody’s been treated yet,” Hanna said. “I’m usually a pessimist and I avoid predictions. However, the progress we’ve seen is very impressive.”

Dr. Mark Israel, ICRF’s national executive director, said the fund “has been the catalyst that started the research careers of many of Israel’s most prominent and world-renowned scientists” — including a Nobel Prize winner.

“We are proud to have also supported Jacob Hanna early in his career, and have recently awarded him a Research Professorship grant, ICRF’s highest individual honor,” Israel said. “We believe that the novel and important discoveries coming from his work will lead us ever closer to the cures for cancer.”