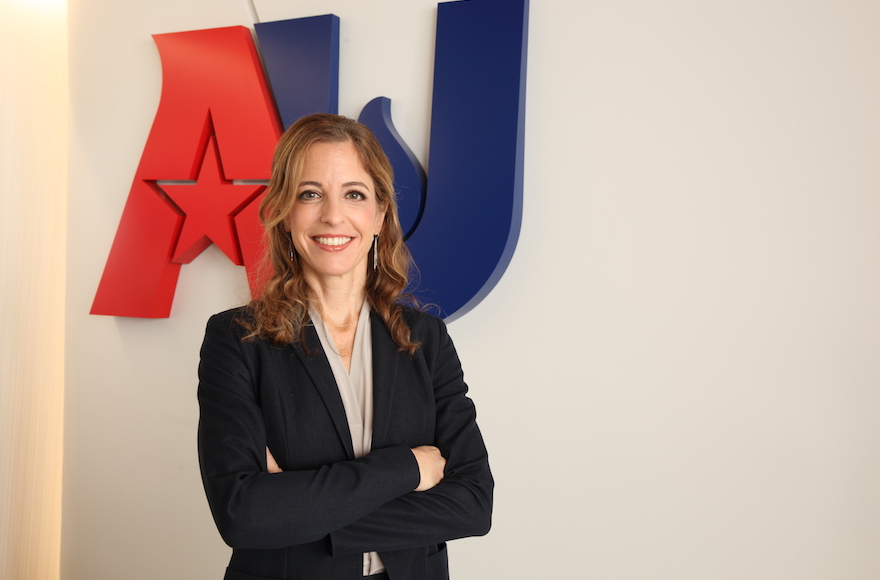 Rachel Laser is the new executive director of Americans United for Separation of Church and State. (Rick Reinhard)
Advertisement

NEW YORK (JTA) — Though Rachel Laser is the new executive director of Americans United for Separation of Church and State, she prefers a different term for the cause for which she now advocates: separation of religion and government.

That difference may be subtle, but it speaks to the significance of the prominent public advocacy’s choice to hire Laser, the first non-Christian to serve in the position.

“I appreciate that ‘separation of church and state’ is a term of art, but as a Jewish person it doesn’t always work perfectly for me as a shorthand,” she told JTA earlier this month.

Laser, 48, is also the first woman to head the Washington, D.C.-based group. She started last month after the previous director, Barry Lynn, a United Church of Christ minister and leader of the religious left, retired in November.

The Chicago native and lawyer has worked for a handful of progressive organizations, including the Reform movement’s Religious Action Center, Planned Parenthood and the National Women’s Law Center. Her work has centered on fighting for issues such as women’s rights, LGBTQ equality and promoting interfaith relations.

Laser said she is taking on her new role at a critical point in fighting to keep religion and government separate.

“We’re witnessing an alarming moment in American history, where our country’s top leaders are failing to honor America’s promise to separate religion and government,” she said.

The most pressing issues today, she said, are federal policies and laws allowing discrimination against LTBGQ people and denying access to reproductive health care on the basis of religion; the promotion of religion in public schools; and the religious discrimination issues surrounding President Donald Trump’s executive order to ban citizens of six Muslim-majority countries from entering the United States.

Her group signed onto an amicus brief — along with the Anti-Defamation League and the National Council of Jewish Women, among others — in a case before the Supreme Court about a Denver-area baker who refused on religious grounds to bake a wedding cake for a same-sex couple. Americans United calls it a “shabby attempt to turn religious freedom into a device to harm others by treating them like second-class citizens.”

Americans United is wary, too, about a new policy that allows the government to use taxpayer money to rebuild houses of worship damaged in hurricanes and other disasters. That puts her organization on the opposite side of religious groups like the Union of Orthodox Jewish Congregations of America and Agudath Israel of America, which think the new policy guidelines pass constitutional muster.

Laser grew up in a Reform Jewish home in Chicago. She said her parents were “’60s people, dedicated to social justice for all,” and made sure their children were surrounded by people of diverse racial and ethnic backgrounds and different sexual orientations.

“That face of America was inscribed into my DNA starting in my youngest childhood,” she said.

Building bridges between communities in the U.S. is something she values. Laser worked previously as cultural program director at Third Way, an organization that unites progressives and centrist evangelicals, where she fought to build consensus on issues such as reproductive health, LGBTQ equality and torture.

“I entered that work with fear and trepidation, and I ended that work convinced that there is remarkable space to bring unusual bedfellows together,” she said.

Laser also helped build bridges between Jews and other religious communities as deputy director of the Religious Action Center, where she led interfaith campaigns related to issues such as gun safety and LGBTQ equality.

At Americans United for Separation of Church and State, she hopes to forge similar bonds, and specifically wants to focus her outreach on the evangelical Christian and African-American communities.

Laser said being a member of a religious minority motivates her to fight for separation of church and state.

“Undeniably as a person from a religious minority, Jewish, I think I feel the importance of separation of religion and government deep in my soul. I have been that person who feels not seen, when it’s assumed that everyone is the culturally dominant religion,” she said.

Laser, who has three children with her husband Mark Davies, an appellate intellectual property attorney, draws inspiration from Judaism. The family belongs to Adas Israel, a Conservative synagogue in Washington.

“I think that I have values that are very deeply informed by my Judaism, which are about equality and fairness and justice: ‘Justice, justice you shall pursue,’” she said, citing a command in Deuteronomy 16:20. “I think my enjoyment of diving deeply into dissecting and clarifying ideas comes from in certain ways our culture’s history of Talmudic study, and I think this job definitely requires a lot of that.”

Though Americans United for Separation of Church and State’s core membership used to be politically conservative (its founders were wary of government support for Catholic schools), today the cause is largely viewed as a progressive one, Laser said. She wants to change that.

“I don’t think it’s intuitive anymore to a lot of Americans that what separation of religion and government is about is freedom of religion, is your ability to believe what you want to believe and to practice your own faith or to choose no faith,” she said.

Laser hopes to bring together people from different sides of the political spectrum and show that finding common ground is not a sign of weakness but of strength.

“I believe that you can agree respectfully not to agree on certain things and at the same time find places of strong agreement and overlap,” she said. “and this issue of separation of religion of government, which is rooted in freedom of religion, is one of them.”