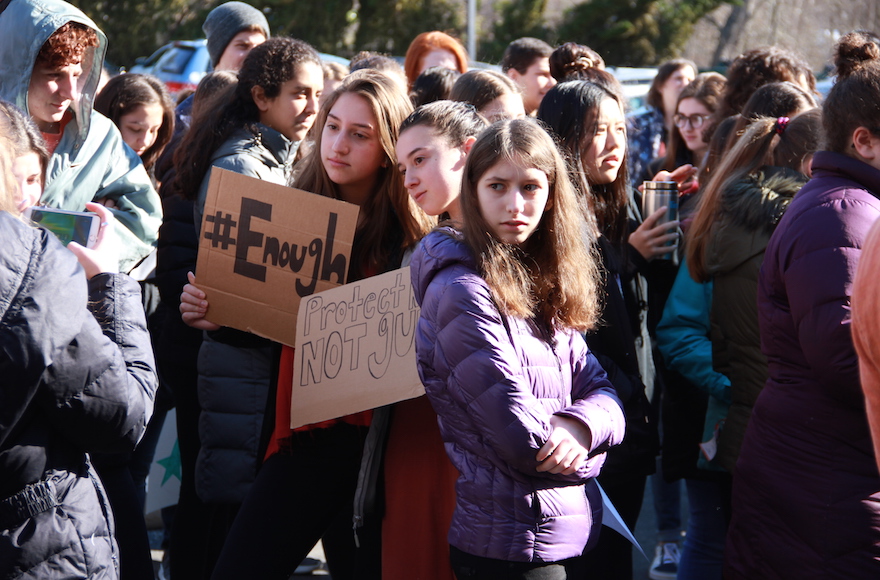 Students around the country walked out of class for 17 minutes at 10 a.m. Wednesday to pressure Congress to approve gun control legislation and to honor the lives of the 17 victims of the Feb. 14 shooting at Marjorie Stoneman Douglas High School. The national walkouts come a week before the March for Our Lives, a protest organized by Parkland students in which their peers from around the country will descend on Washington D.C. to call for stricter gun control.

At Golda Och Academy, a Conservative day school in West Orange, New Jersey, students organized a prayer memorial service ahead of the walkout. At the service, students and teachers spoke about the Parkland victims and lit a yahrzeit memorial candle. Each speaker was picked so that he or she shared some characteristics with the victim being talked about, such as being in the same grade or teaching the same subject.

Afterwards, the overwhelming majority of students chose to participate in a walkout, where they carried signs, made speeches and sang songs.

Theo Deitz-Green, an 11th grader and the president of the school’s student council, said he and other student organizers planned the event after learning about the Parkland shooting.

“There was a sense that yes it happened at a different school, but it could have just as easily happened at our school, we could have been the school experiencing that tragedy,” Deitz-Green told JTA over the phone.

“As we saw the Parkland kids start to speak out, there was a sense that something about the aftermath of this shooting had to be different. It was time not just for the country to change but for students to lead that change,” he added.

Another organizer, 8th grader Sarah Farbiarz, was happy with how the event turned out.

“We worked really hard, so most of it seemed really powerful, and really moving, especially at the end when people were singing together, I thought that was a really great moment,” Farbiarz said.

The school was supportive of the students, said the head of the school, Adam Shapiro.

“From a school perspective we supported the desire of the students to carry out this program and make their powerful voices heard,” he told JTA in an email.

Earlier this month, Shapiro led a group of 139 heads of Jewish day schools who signed an open letter voicing their support for students organizing for gun reform after the Parkland shooting. 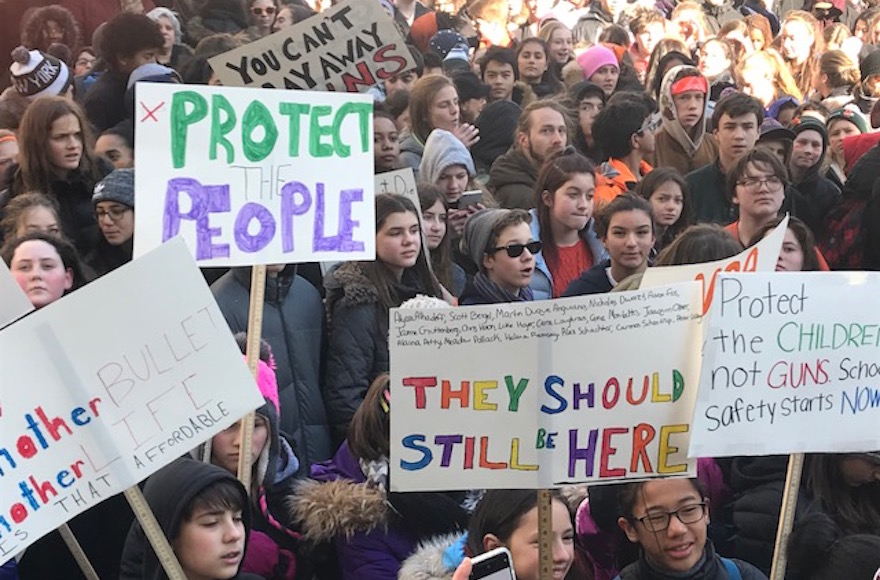 Students at Hannah Senesh Community Day School in Brooklyn also held a prayer memorial service. The service honored all victims of gun violence in schools. Students gave out note cards with the names of gun violence victims, lit a yahrzeit candle and prayed for the families of victims.

After the service, students had the choice to stay inside, walk outside the school or walk together with teachers to Brooklyn Borough Hall, where students from other schools gathered. The majority of students took part, said Annette Powers, the school’s director of communications and marketing.

Powers said supporting the walkout was “very much in line with our values.”

“We’re a school that really promotes the idea of social action and not just talking about issues but taking action to make a difference,” she said.

At the Jack M. Barrack Hebrew Academy, a pluralistic school in Bryn Mawr, Pennsylvania, students gathered in a parking lot outside the school. They read about the lives of the Parkland victims and heard speeches from students and teachers.

“It was really an incredible sense of togetherness that all these people I’ve talked to about other issues where we might not agree, or just people that I don’t know very well, we all came together and stood together for this issue that we all feel so passionately about,” said Sophia Shapiro, a 10th grader who organized the walkout together with 11th grader Ruthie Cohen. 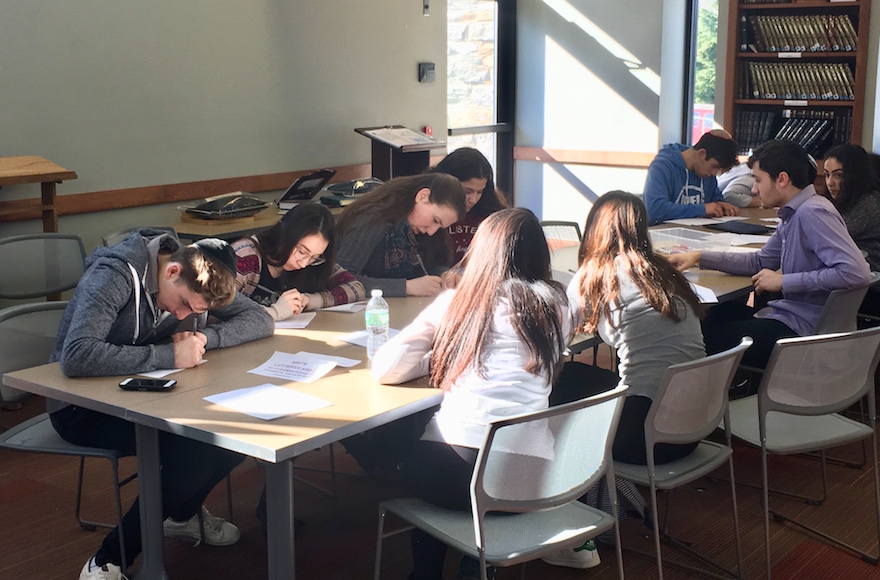 High school students at Kohelet Yeshiva in Merion Station, Penn., were give the option of writing letters of support to students, faculty, and families in Parkland, Florida, the site of the Feb. 14, 2018 school shooting. Others at the school joined the nationwide walkout. (Courtesy of Kohelet Yeshiva)

She emphasized that the walkout was only the beginning of action. Shapiro and Cohen are planning to find ways to keep their fellow students engaged on the issue, including by organizing students to contact their local representatives.

Middle school and high school students at Kohelet Yeshiva, an Orthodox day school in Merion Station, Pennsylvania, attended an assembly at 10 a.m. to observe 17 seconds of silence in honor of the Stoneman Douglas victims. Students were then given the option to join the national walkout, to write or call legislators and “urge them to implement common sense solutions to reduce gun violence and deadly school shootings,” or to send letters of support to students, faculty and families in Parkland, according to a statement from the school.

Haaretz reported that students at SAR Academy, a Modern Orthodox day school in Riverdale, New York, chose not to take part in the walkout because of the organizational support it got from Women’s March Youth Empower, an affiliate of Women’s March. Last month, a Women’s March co-chair, Tamika Mallory, boasted of her attendance at a rally by Louis Farrakhan where the Nation of Islam leader made the latest in a long string of anti-Semitic remarks. Mallory did not apologize for her support for Farrakhan; Women’s March released a statement saying Farrakhan’s  statements about Jews “are not aligned” with the group’s principles while asserting that the leaders “love and value our sister” Mallory.

“We felt that the leadership of the Women’s March didn’t sufficiently dissociate themselves from someone who’s anti-Semitic,” Rabbi Tully Harcsztark, principal of SAR, told Haaretz.