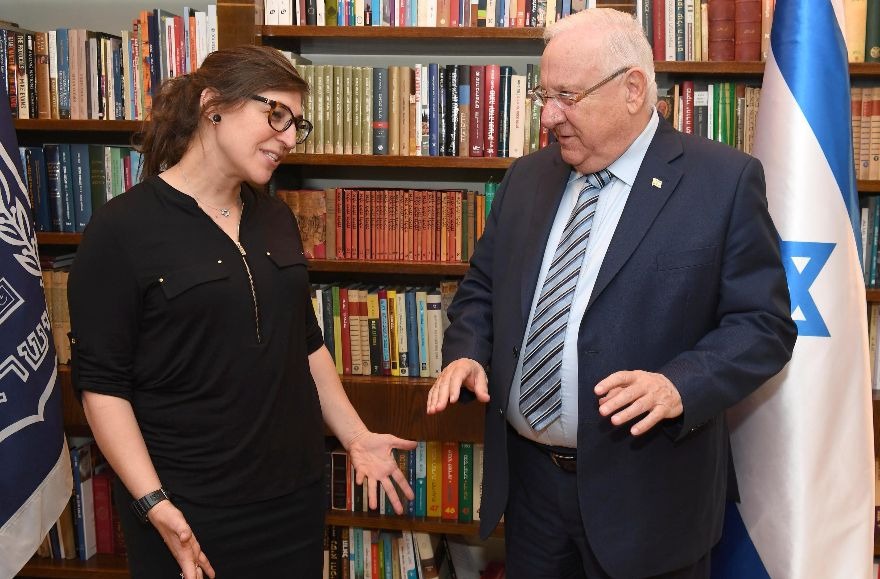 On Sunday, Reuven Rivlin told Bialik that he had heard so much from his grandchildren about her, her work as an actress and her strong support for Israel. The star of the hit television series “The Big Bang Theory” is in Israel to participate in the Global Forum for Combating Anti-Semitism, which starts Monday in Jerusalem.

“My family came to live in Israel when I was born, and they lived in a few places around the country, so I grew up with a strong Zionist identity,” she told Rivlin.

Bialik, 41, has a doctorate in neuroscience and plays neuroscientist Amy Fowler-Farrah on her show. A divorced mother of two sons, she was raised Reform and now practices Modern Orthodoxy. In many interviews she has described herself as a Zionist and has family living in Israel.

Earlier this month, Bialik asked her followers on Facebook to nominate her to light the torch reserved for a representative of Diaspora Jewry during the opening Israel Independence Day ceremony on Mount Herzl.

At the Global Forum, she is scheduled to speak about her experiences as a Jewish and Zionist actress, and about the difficulties caused by a climate of anti-Semitism and anti-Zionism.

Other speakers scheduled for the forum, an initiative by Israel’s Ministry of Foreign Affairs and Diaspora minister in the international struggle against anti-Semitism, include the president of Bulgaria, Rumen Radev; a former prime minister of France, Manuel Valls; Israel’s education and Diaspora affairs minister, Naftali Bennett; Israel’s justice minister, Ayelet Shaked; and a former secretary-general of the United Nations cultural organization UNESCO, Irina Bokova.