Ukraine to commemorate Reform synagogue destroyed by Nazis in Lviv 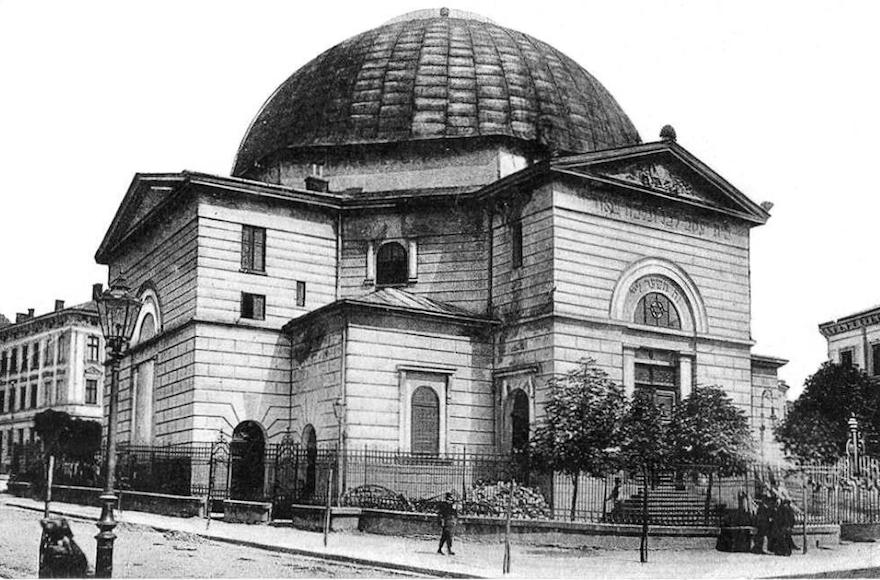 A view of the Temple Synagogue in Lviv, Ukraine in the early 20th century. (Wikimedia Commons)
Advertisement

(JTA) — Municipal authorities in the city of Lviv in Ukraine are designing a monument marking the site where one of the region’s first Reform synagogues once stood before the Nazis destroyed it.

A preliminary design calls for paint or red-tinted bricks that would trace the contours of the Temple Synagogue, whose foundations lie under Old Market Square, the website TvoeMisto reported Friday.

“We also want to add greenery and remove a few kiosks so that they do not block the entrance from the tram stop to the relevant part of the square,” architect Olga Krivoruchko, who is preparing the project in consultation with Jewish organizations and local business owners, told the news website.

Temple Synagogue was a classical building with a large dome that was inspired by the Viennese Main Synagogue. The Nazis blew it up in 1941.

Temple Synagogue was built in 1845 on the foundations of an earlier, Orthodox synagogue. It was one of the first Reform synagogues built in Galicia, an area that is now split between Ukraine and Poland, and which has changed hands many times among those countries, Russia and Germany.

The plans for commemorating are part of a memorial initiative in Lviv that began with the 2016 incorporation of the ruins of the Golden Rose Synagogue into what the city calls the “Space of Synagogues” — a park-like area with some commemorative plaques and subtle design elements.

In Lviv, some Jews, including the Chesed-Arieh association, supported the “Space of Synagogues” concept. But it was opposed by others, including Meylakh Sheykhet, Ukraine’s director of the Union of Councils for Jews in the Former Soviet Union.

In Western Europe, Holocaust commemoration monuments typically feature obtrusive architecture, such as tall black walls whose advocates say are conducive to reflection and discourage everyday use by dog walkers, couples, children and other park users.

Sheykhet argued that the Space of Synagogues would essentially become a park in a central location, thereby “selling out on the memory of the murdered.”