‘We march today because it’s what we have to do to sleep tonight’: Jewish students on the March for Our Lives 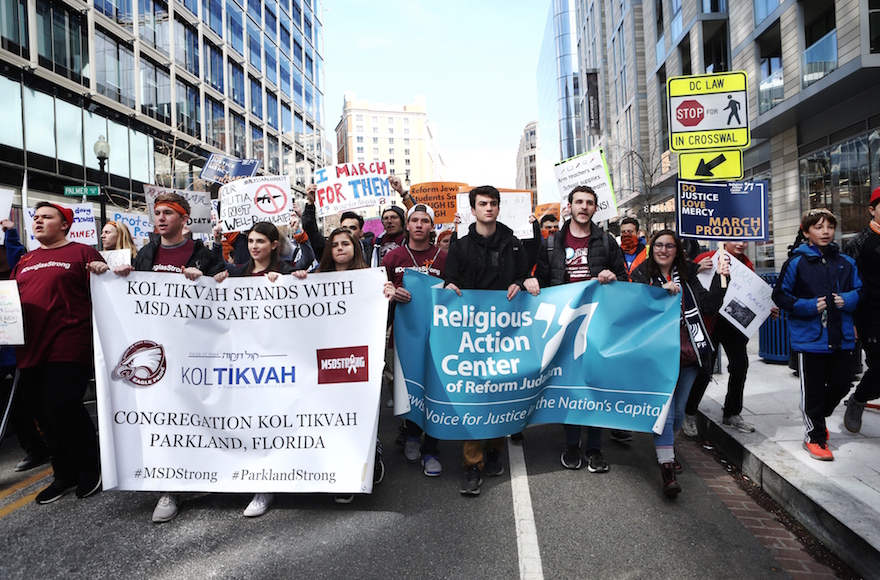 Jewish students leading the Reform Movement to the March for Our Lives in Washington, D.C., March 24, 2018. (Hector Emanuel for the Religious Action Center of Reform Judaism)
Advertisement

WASHINGTON (JTA) — The organizers of the March for Our Lives, almost all of them under 20, had a gun control agenda packed with specifics. They were able to get 800,000 people on and off of this city’s Pennsylvania Avenue in three hours. They attracted A-list celebrities. They turned out marchers at more than 800 satellite events held around the world.

But the politics and logistics of the weekend often paled next to the simple — and harrowing — stories of the students who were inside Marjory Stoneman Douglas High School in Parkland, Florida, on Feb. 14, when a gunman roamed their halls and killed 17 students and faculty.

On the stage on Pennsylvania Avenue on Saturday, Aaliyah Eastmond and Samantha Fuentes described the terror they felt at Stoneman Douglas when the gunman burst in on their Holocaust studies class. Two students in the class, Nicholas Dworet and Helena Ramsey, were killed.

Fuentes said she wanted a world where “you don’t have to worry about going into a Holocaust history class to learn about death, and then experience it before your eyes.” She was so overcome with emotion describing the day, she threw up — and then completed her speech, with encouragement from the crowd.

Marchers came from across the country, among them at least 2,500 Jewish teenagers from as far afield as California, Colorado and Minnesota. They threw sleeping bags on the floors of local synagogues and Jewish community centers under the aegis of the Reform movement’s North American Federation of Temple Youth, or NFTY.

Also organizing hundreds of teens from around the country was the Conservative movement’s United Synagogue Youth. It took 21 hours for 75 teens to bus in from Minneapolis-St. Paul. They turned up outfitted in T-shirts that were colored orange for gun control and read #Dayenu — “it would have been enough” in Hebrew.

At an event in a ballroom deep in the bowels of Washington’s Marriott Marquis hotel in the hours before the march, the NFTY leadership — as with the wider demonstration, the Jewish presence was largely organized by teenagers — gave them permission to vent.

“We march today because it’s what we have to do to sleep tonight,” said Zoe Terner, the social action vice president for NFTY’s Southern Tropical Region. “This is how we grieve.”

Five of the slain at Stoneman Douglas were Jewish and the school is estimated to be 40 percent Jewish. Terner, 18, attends high school in nearby Delray Beach and has made friends from Stoneman Douglas through the movement. 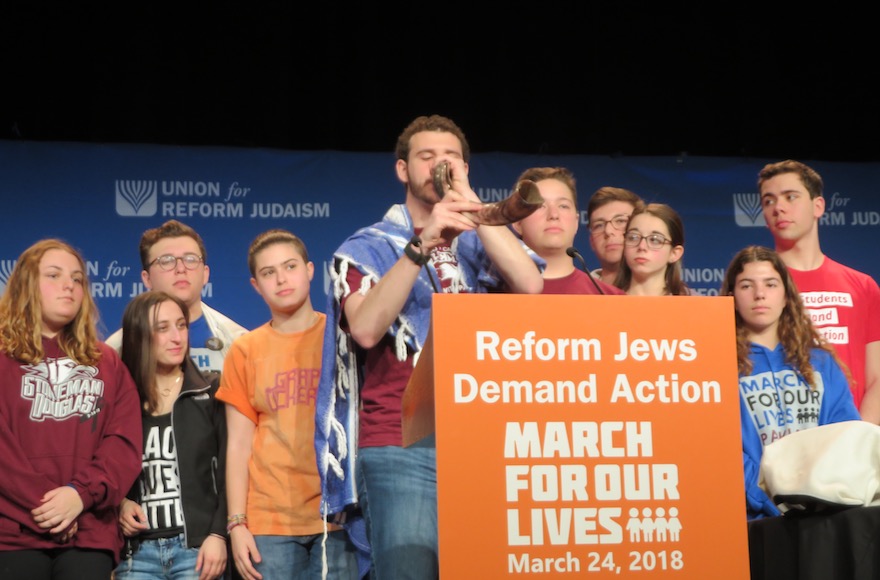 A NFTY activist blowing a shofar before the March for Our Lives march against gun violence in Washington D.C., March 24, 2018. (Ron Kampeas)

The night before, at a Shabbat service at Washington Hebrew Congregation in the capital’s Northwest quadrant, Terner pledged: “Tomorrow I will pray with my feet, and with every step, I will think of those few hours a month ago when I didn’t know if my friends were alive or dead.”

And so they grieved by telling their stories.

“I will not stand idly by the blood of my classmates,” survivor Zoey Fox-Snider told the marchers gathered in the hotel ballroom Saturday morning, paraphrasing Leviticus 19:16, “after spending two-and-a-half hours fearing for my life in the storage room of the media center.”

The evening before at Washington Hebrew, she told congregants about her thoughts in the storeroom.

“I was forced to text my mom, ‘I love you and everyone. This is real,'” she recalled.

At a media opportunity organized by NFTY, Stoneman Douglas students Talia Rumsky, 16, Charlie Goodman, 15, and Kayla Renert, 15, started an interview by talking about the Jewish values that brought them to the march. But Renert soon lapsed into remembering the day, and the others started talking over her.

“We had to run past the middle school …,” Renert said.

“We heard the gunshots …,” Renert said.

“My sister Sophie was in the middle school,” Goodman said. “I had no idea what was going on.”

They slowed down and got back to what brought them to Washington.

“Those people we lost on that day, that’s who we’re here for,” Rumsky said.

“We have a lot of nervous energy,” Goodman said. “We’re using this as an outlet.”

Marlee Gordon, a counselor at Camp Coleman, the Union for Reform Judaism camp in Georgia attended by a number of Stoneman Douglas High students, remembered when she heard that Alyssa Alhadeff was among the missing and presumed dead. Alhadeff had been a Coleman camper under another friend’s charge.

“He refused to believe she had died,” recalled Gordon, 19, who along with two other friends at the University of Georgia kept her fellow counselor company that night. “We stayed with him all night waiting for Alyssa’s name to be said on the news, so we would be there.”

The disciplined message, delivered to lawmakers on Friday, honed at the NFTY event on Saturday and reiterated again and again by the speakers at the main event on Pennsylvania Avenue, was multi-pronged. It called for a ban on the purchase and sale of assault weapons, on the sale of high-capacity magazines, the institution of universal background checks for gun purchasers, and ending background check exemptions for purchases online and at gun shows.

There was plenty of glitz at the march itself, including performances by Broadway stars Lin-Manuel Miranda and Ben Platt, by rapper Common and by pop stars Miley Cyrus and Ariana Grande. (The survivors on stage, who sounded so wizened, became kids again when Grande finished singing “Be Alright,” rushing her for selfies, which she accommodated with a grin.)

There was an acutely self-aware sense of why they were able to attract that star power. 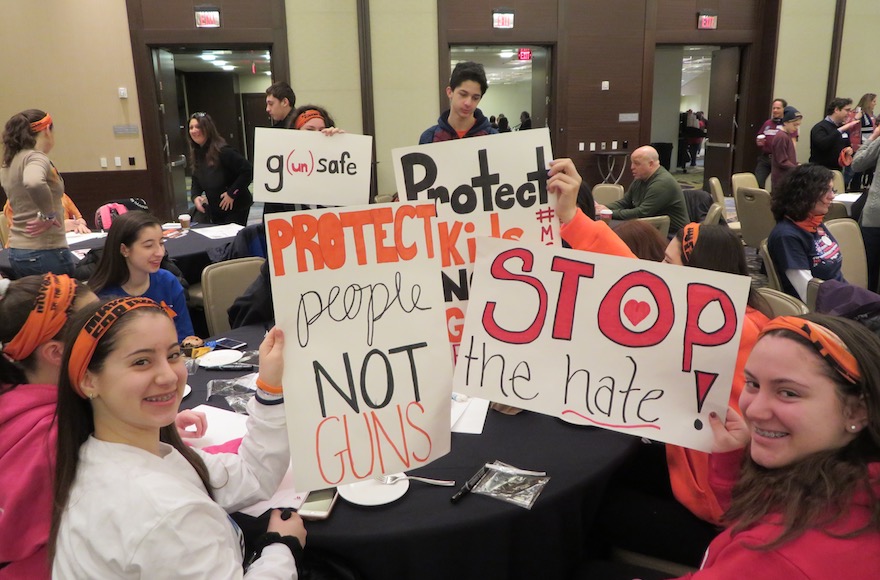 Rebecca Waldman, left, and Lindsey Jacobs, both from New Jersey, pose with placards they prepared for the March for Our Lives in Washington, D.C., March 24, 2018. (Ron Kampeas)

One of the speeches that drew the loudest cheers was by Naomi Wadler, 11, from Alexandria, Virginia.

There were the moments of faith. Marchers spilled out of churches along Pennsylvania Avenue. Edna Chavez, who lost her brother to gun violence in south Los Angeles, crossed herself as she walked on stage. Some Jewish marchers held signs emblazoned with words from Leviticus 16:19: “Do not stand idly by while your neighbor’s blood is shed.” (Not all the signs were so reverential. “ALTE KAHKERS STAND WITH OUR CHILDREN,” read one placard, using a salty Yiddish term for the elderly.)

Rabbi Shmuel Herzfeld of the Orthodox Ohev Shalom Synagogue in Washington planned to walk the more than seven miles from his shul to the rally with 75 kids from around the country spending Shabbat with his community. Jews and Muslims Acting Together also planned on marching, according to an organizer, Walter Ruby, carrying sings reading “Quran and Talmud say, ‘If you save one life, you save the world.’ Prevent Gun Violence Now!”

“‘Al Chet Shechatanu Lifanecha’ – for being understandably outraged by a mass shooting in an affluent, majority white community, and being all too silent when children of color are murdered every day,” he said.