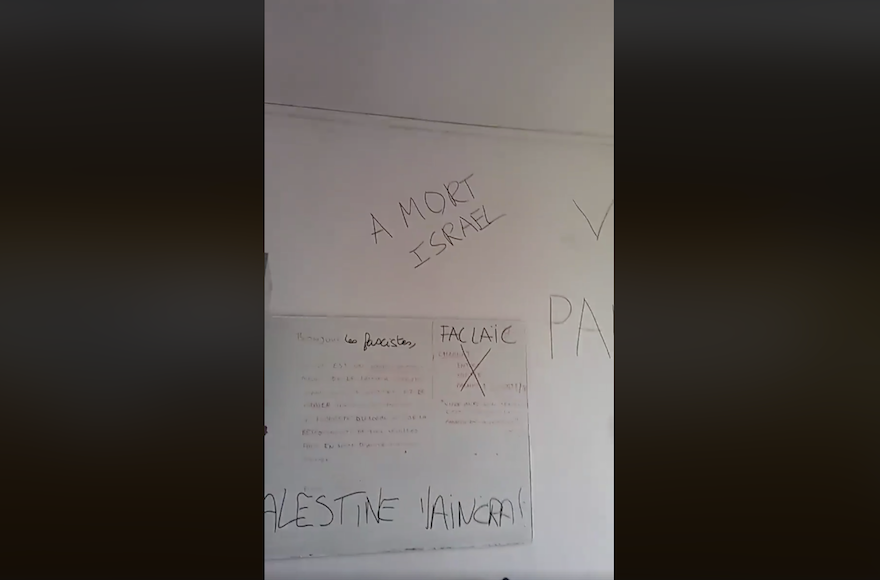 (JTA) — Someone broke into the office of a Jewish student group at a university in Paris, vandalizing with anti-Israel and anti-Semitic graffiti and strewing its papers across the room.

The attack on the office of the French Jewish Students Union at the University of Paris came on Wednesday, hours before some 10,000 people participated in a memorial march in Paris for an 85-year-old Holocaust survivor who was burned and found dead with 11 stab wounds in what police are calling an anti-Semitic murder.

Among the graffiti written on the walls of the office was “Zionist racist anti-goy office,” and “Palestine will prevail,” as well as “Death to Israel,” and “Viva Arafat,” referring to the late Palestinian leader Yasser Arafat.

A far-left student group reportedly was protesting on the campus at the time of the vandalism, according to the French daily Le Monde. The group’s protest was not about Israel.

University president Georges Haddad tweeted a condemnation of the attack, calling it “an odious act.” The French Minister of Higher Education Frédérique Vidal called it “shameful.”

The Jewish student leaders said they will ask police to open an investigation.