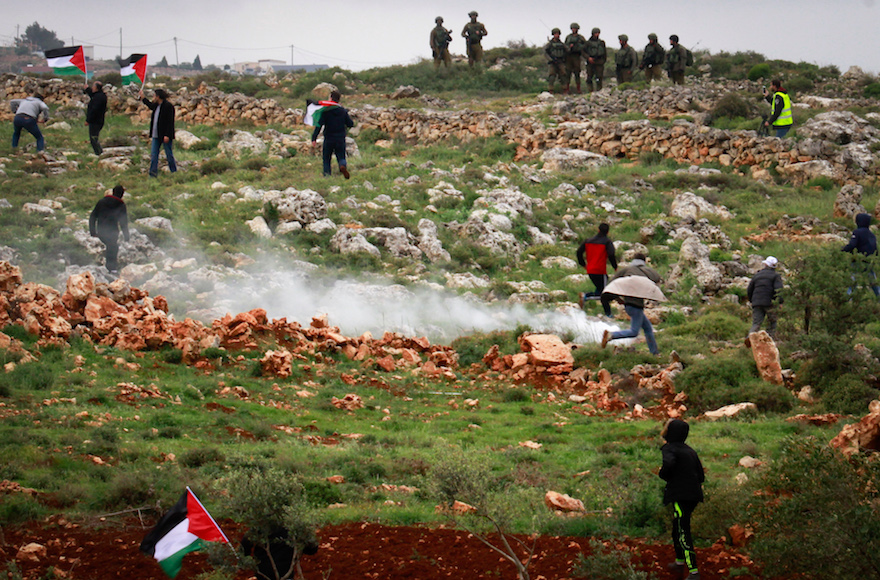 (JTA) — At least 12 Palestinians reportedly were killed as Israeli troops fired on massive protests in the Gaza Strip along the border.

The Times of Israel, citing the Palestinian Healthy Ministry, reported Friday that at least 500 Palestinians were injured by live fire, rubber-coated bullets or tear gas during the so-called March of Return co-organized by Hamas, the terrorist group that rules the coastal strip. The Israeli military did not confirm the Hamas figures.

A Palestinian was killed hours before the march, which kicks off six weeks of protest by Palestinians.

Maj. Gen Eyal Zair, of the Israel Defense Forces Southern Command, said Israeli troops were identifying “attempts to carry out terror attacks under the disguise of riots,” according to USA Today.

The IDF said at least 17,000 Palestinians were rioting in six locations in the Gaza Strip and the troops began “firing towards main instigators.” Protesters were “rolling burning tires and hurling stones at the security fence and at IDF troops,” the IDF said.

“The troops have been given clear orders on opening fire,” Brigadier Gen. Ronen Manelis, the IDF spokesman, said in an interview Thursday with the Israel Broadcasting Corp., or KAN, about the March of Return in the Hamas-controlled enclave. “Whoever tries to interfere with the security infrastructure or compromise the fence for a mass crossing into Israel, we will prevent this action.”

The march is organized on Land Day – a date that Israeli Arabs began observing in 1976 in which they protested what they regarded as unjust confiscation of territory by the Jewish state.

On previous Land Days, pro-Palestinian activists have called for a “global march to Jerusalem” from the West Bank, Gaza Strip, Egypt, Lebanon, Jordan and Syria. During Land Day demonstrations in 2011, anti-Israel activists surged across the Lebanon and Syria frontiers, drawing deadly gunfire from Israeli troops.

The IDF doubled its deployment along the fence ahead of the march, KAN reported. Infantry troops, including special forces, are taking up positions inside towns in immediate proximity to the fence.

The Palestinian Authority has not called in its official channels on Palestinians in the West Bank to participate in Land Day events, according to KAN.