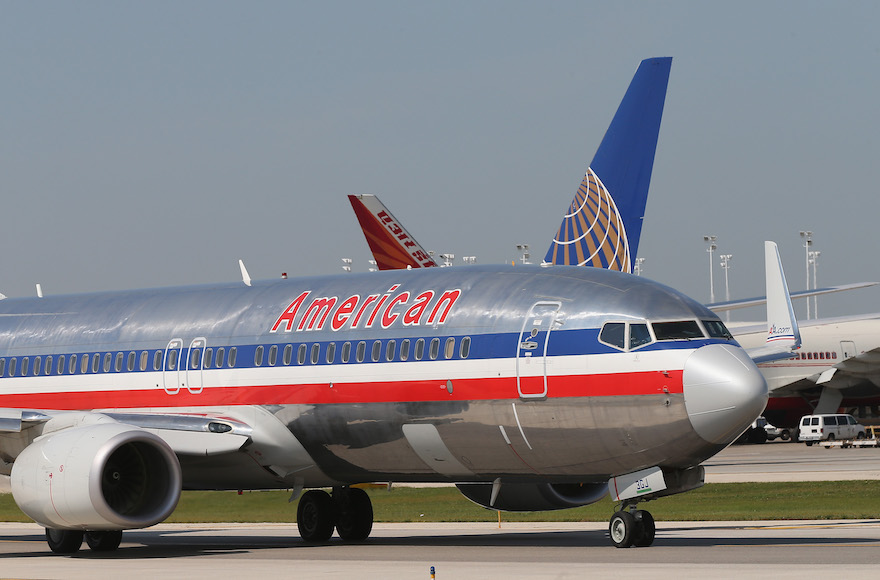 (JTA) — The ancient Israelites had to cross the Red Sea. Four thousand years later, Jeannie R. Fisher had to get her family of five from New York City to South Florida before Passover started.

It was unclear which was harder.

Fisher, like thousands of Jews, descends annually from the Northeast to the Bubbe Belt for Passover. But her plans and others’ were thrown into turmoil on Friday when her 8 a.m. American Airlines flight from New York-La Guardia Airport to Miami was canceled.

Fisher is an observant Jew. If her family couldn’t make it down to Bal Harbour by sundown, she’d have to scramble to find a seder in New Jersey.

The drama began at 2:30 a.m., when Fisher’s husband was awakened by a buzz from his phone. The text message said their flight was canceled, with no explanation. The couple then spent hours on the phone trying to find an alternative flight for themselves and their three kids, aged 8, 12 and 14.

The only flight they were offered was at 10 p.m., three hours after sundown. They fared no better with flights from Kennedy, Newark Liberty and beyond.

“We spent the next two hours on the phone trying to find any flight from the New York area, and I mean any,” Fisher said. “We looked into Westchester, Hartford, which is not that close. We looked at Philly. Every flight that would get us there in time for the seder was fully booked.”

They inquired on Facebook to see if a friend had a creative solution, but no dice.

“I had a fantasy that someone would have their private jet and invite us on their trip to Miami,” she said. “That didn’t happen.”

In the end, they had two options — a free American Airlines flight from Boston, or a JetBlue flight from Newark, which meant buying five new tickets.

There was one problem: The Uber driver didn’t know he was taking them to Boston. The app said the drive was long, but it didn’t say how long. He figured he was taking the Manhattan family to an airport — but he thought the airport was in Queens.

“He was laughing,” Fisher said. “When he got the drive, it said 45 minutes-plus. He knew it was a long drive, so he assumed it was JFK. It doesn’t tell you it was going to Boston. He was joking about how maybe he’ll visit relatives in Connecticut on the way back.”

The driver, a nice guy from the Bronx, still bonded with the family. They’re all baseball fans (him Yankees, them Mets), so they bantered over the new season. They only made two stops — for gas and for doughnuts at around 10:45, the last time observant Jews could eat leavened products before the holiday. When they passed Fenway Park, they all cheered — even the Yankees fan.

American Airlines never gave the Fishers an explanation for the cancellation, which presumably left other Jews scrambling on the day of the first Passover seder. But an American Airlines representative told JTA that the flight was canceled due to “a mechanical issue” on a flight from Miami to New York the night before, and that the airline was offering to rebook passengers’ flights.

“We never want to disrupt our customers’ travel plans, and we are sorry for the trouble this caused,” Ross Feinstein, the representative, said in an email.

The Fishers made it to Boston Logan Airport in time for their flight, scheduled for before 1 p.m. But then they ran into another problem — their new flight was delayed.