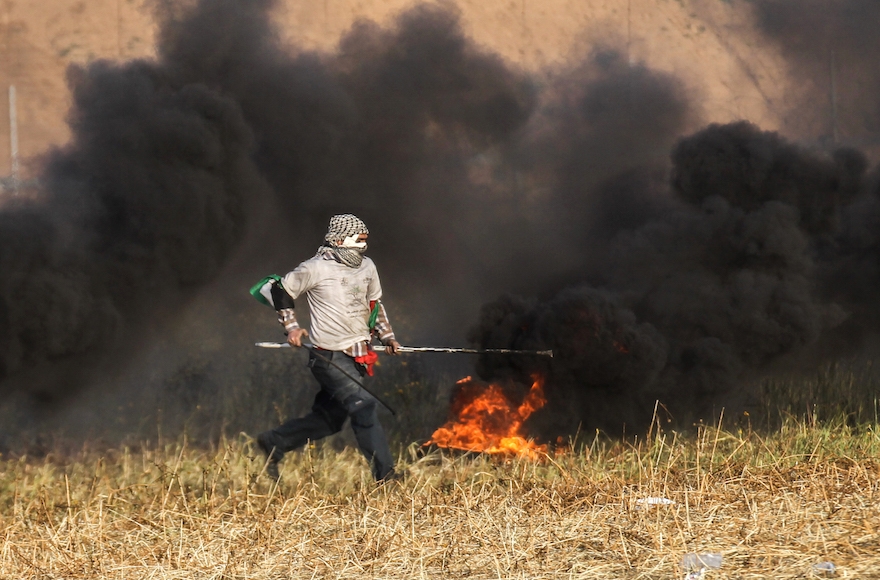 A Palestinian protester burning tires during clashes with Israeli forces near the border of the southern Gaza Strip, April 2, 2018. (Said Khatib/AFP/Getty Images)
Advertisement

JERUSALEM (JTA) — When the smoke from the rifles of Israeli sharpshooters and the firebombs thrown by Gaza Palestinians cleared in the wake of the Palestinian March of Return, there were at least 15 Palestinians dead and hundreds of protesters injured. Israel, meanwhile, had a huge PR mess.

But the criticism and defense in the international arena was nothing compared to the debate at home, where parties on the far left have accused the Israeli military of having a “trigger-happy policy” and the government insisting that a domestic or international inquiry into Israel’s reactions to “orchestrated violence” is unjustified.

Plans for the March of Return were not a secret, with Hamas announcing early on that it would bring 100,000 Gaza Palestinians to the border on Land Day, March 30, and that thousands would remain there living in tent cities until May 15, the anniversary of the day when Israel became an independent state, which the Palestinians call the Nakba, or Catastrophe. It is also the date by which the Trump administration has pledged to move the U.S. Embassy to Jerusalem from Tel Aviv.

Palestinians around the world have observed Land Day since 1976, when six Israeli Arabs were killed and another 100 injured in clashes with Israeli soldiers and police during protests over the expropriation of Arab-owned land in northern Israel by the state to house Jewish citizens.

Israel, in turn, made it clear prior to the march that it would be prepared for anything and everything should the protesters attempt to breach the Gaza border fence or if it was determined that Israeli lives were in danger. Two days before the march, the Israeli army’s chief of staff, Lt. Gen. Gadi Eisenkot, said in interviews that his soldiers were prepared to use live fire to quell violent rioting and that 100 Israeli snipers would be put into place around the border to assist in the task.

In retrospect, violent clashes and the casualties among the about 30,000 Palestinians who converged on the border were inevitable.

“The violent march on Israel’s southern border is another deliberate provocation by #Hamas, which intentionally endangers #Gaza civilians, including women and children, while trying to put the blame on Israel,” Israel’s Foreign Ministry tweeted. “It’s simply a part of Hamas strategy.”

If deliberate, the policy paid off quickly and dramatically. As the body count and the number of injured rose, the Palestinian publicity machine kicked into high gear, with photos on social media showing crying Palestinian women holding bloodied family members and Palestinian protesters running from Israeli snipers. One video showed a young Palestinian man being shot in the back and killed by an Israeli shooter as he fled from the border.

At the same time, the IDF Spokesperson’s Office released videos to counter the images, including one nearly two minutes long narrated by the head of IDF Public Diplomacy summarizing Friday’s events and showing clips of Palestinian protesters throwing burning tires, firebombs and attempting to breach the security fence.

“Our soldiers precisely targeted the specific terrorists that attempted to carry out these acts of terror, some of them known terrorists to our security forces,” Maj. Keren Hajioff said in the video.

On Saturday, the IDF released photos of 10 Palestinians killed in the previous day’s clashes with information about their terrorist activity. Earlier in the day, Hamas publicly acknowledged that five members of its military wing, the Izz ad-Din al-Qassam Brigades, were among those killed.

After a long weekend that included the celebration of Passover and Easter Sunday, Israel’s Foreign Ministry told The Times of Israel that it believed it handled the public diplomacy well, saying it did not want to call more attention to the situation, which it determined was not getting much interest around the world.

But Israeli lawmaker Michael Oren, the former Israeli ambassador to the United States who is now the deputy minister in the Prime Minister’s Office responsible for diplomacy, told the news website that “Israel’s public diplomacy wasn’t ready.”

“It always goes wrong,” Oren told The Times of Israel. “We don’t lay the groundwork, we don’t prepare the media about what’s about to happen.”

In the U.S., tweets from Sanders, in which he called the Palestinian deaths “tragic,” gained traction. So did calls by the European Union and Human Rights Watch for an “independent and transparent investigation” into Israel’s use of live ammunition to quell the rioting.

Things were not any better at home. On Saturday night, Netanyahu released a statement praising the country’s soldiers for “guarding the country’s borders and allowing Israeli citizens to celebrate the holiday quietly.” The following day, Defense Minister Avigdor Liberman asserted that the soldiers “did what was necessary” and asserted there would be no international inquiry into their actions.

But an inquiry is precisely what the left wants. Tamar Zandberg, the newly elected head of the left-wing Meretz party, called on the government to open an independent investigation into the violence on the Gaza border.  Se called for “a probe into the rules of engagement and the military and political readiness for the events.”

“We must not allow a ‘trigger-happy’ policy to lead to the loss of innocent lives,” she also said in statements posted on social media.

Isaac Herzog, the leader of the Israeli opposition and head of the Zionist Union, was more circumspect in a Facebook post on Friday night.

“Sending strength and encouragement to all the soldiers of the Israel Defense Forces and the members of the security forces who this night are protecting the citizens of the state and are required to be away from their family Seder tables,” he wrote.

Yair Lapid, head of the centrist Yesh Atid party, asserted on Facebook that Israel “has no war with women and children. We’re doing everything we can to avoid hitting civilian populations.”

Lapid also said that a commission of inquiry should ask “what would have happened if instead of investing in terror and death, the Palestinians would have spent the last 12 years building their economy, civilian life, education, a health system? Why are they willing to make their own life, their children’s, to an ongoing hell just because the most important thing to them is to try to kill Jews?”

The head of the Arab Joint List party, Ayman Odeh, had a different view. He asserted in an interview on Israel’s 10 News that Hamas is “under occupation” and that Israel “closed Gaza, threw the key into the sea and said ‘We’re not responsible.'” Odeh also said that Hamas did not plan the Friday march, but just joined in as a supporter.

Meanwhile, Army Radio host Koby Meidan grabbed some attention in Israel, and was suspended, for a Facebook post on Saturday in reference to the previous day’s violence saying “Today I am ashamed to be Israeli.” Liberman responded in an interview that he is “ashamed to have a radio host of the type on Army Radio,” and called on Meidan to resign.

The debate in Israel over the Palestinian protest and the IDF response is likely to remain at a rolling boil for the next several weeks as March of Return protests continue and increase. Clashes continued over the weekend following the large Friday protests, and three Gaza Palestinians were arrested Sunday evening for attempting to breach the security fence. Large-scale protests are in the works again for Friday, and some have threatened that they will go beyond Gaza. Israeli-Arab lawmaker Ahmed Tibi told Army Radio last week that Palestinians would breach the fences of West Bank Jewish settlements during the weeks-long protest – though “without weapons, in a peaceful way.”

And while Hamas has appeared to endorse a nonviolent march, Ismail Haniyeh, the head of its political bureau and a former Palestinian Authority prime minister, indicated that it has not given up its terrorist ways.

“The Great March of Return is peaceful, but this does not mean that Hamas gave up other forms of resistance, which are the main part of its strategy to fight the occupation,” he said ahead of the march.

Haniyeh: “The Great March of Return is peaceful, but this does not mean that Hamas gave up other forms of resistance, which are the main part of its strategy to fight the occupation.”