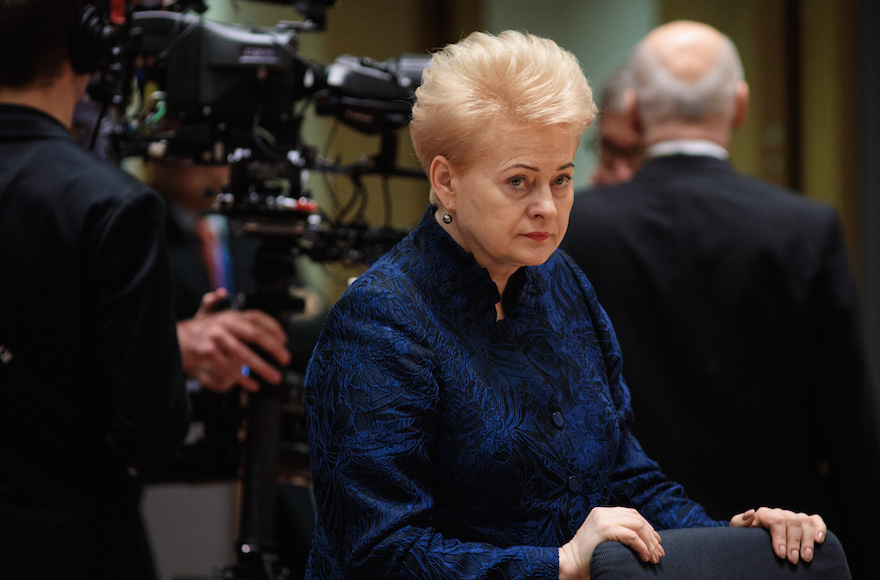 (JTA) — The Lithuanian parliament is preparing to vote on a government-sponsored bill that would ban selling material that “distorts historical facts” about the nation.

The bill, which Economy Minister Virginijus Sinkevičius submitted Monday, is widely seen as a response to the controversy in Lithuania around the publication of a 2016 book about the Holocaust titled “Our People.” Viewed by some nationalists as an insult to the Lithuanian nation, it is also credited with breaking some taboos in Lithuanian society about collaboration during World War II.

The bill, which according to the Delfi news agency is an amendment to the Law on Consumer Protection, provoked passionate condemnations in Lithuania and beyond by critics who said it curtails freedom of speech and debate about the genocide, in which 90 percent of Lithuanian Jews were killed, mostly by other Lithuanians.

Whereas several Eastern European countries have laws that limit free speech about the Holocaust, including Poland, Ukraine and Latvia, the bill targeting the sale of critical books “would be, if passed into law, one of the most blatant and harshest of them all,” said Holocaust historian Efraim Zuroff, who co-authored “Our People” with Rūta Vanagaite, a best-selling novelist.

Last year, the Alma Littera publishing house in Lithuania recalled another book by Vanagaite after she spoke in an interview about Adolfas Ramanauskas, an anti-Soviet combatant during the war, who admitted to commanding troops that witnesses said butchered Jews in the ghetto of Druskininkai, 75 miles southwest of Vilnius.

Vanagaite’s controversial statement was not about the Holocaust. She said her research into Ramanauskas’ death in 1957 suggested he committed suicide after betraying the names of fellow nationalists to the KGB, which captured Ramanauskas the previous year.

“Rūta Vanagaitė’s statements are unacceptable to us and incompatible with the values of the Alma Littera publishing house,” its CEO, Danguolė Viliūnienė, said in a statement. Vanagaite has since left Lithuania.

Last week, The New York Times published an  article about the Holocaust at the Museum of Genocide Victims in Vilnius, a state-run institution tht until 2011 did not mention the more than 200,000 Lithuanian Jews who died in the Nazi Holocaust.

In Lithuania, “genocide” is used refer to the events that followed its domination by the former Soviet Union. While Soviet rule was harsh, few outside of Lithuania agree that the USSR aimed to wipe out the Lithuanian people.