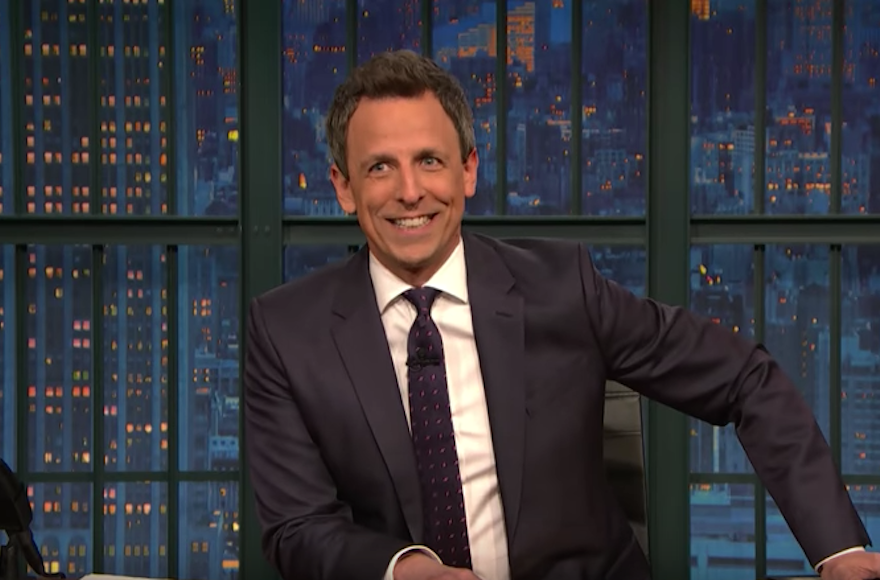 (JTA) — Seth Meyers’ newborn baby boy is named Axel Strahl Meyers. The Strahl in there might sound unusual, and that’s because it’s actually a surname — one that belonged to his wife’s grandparents, who were both Holocaust survivors.

In a touching segment on his NBC show “Late Night with Seth Meyers” Monday night, he explained the dramatic circumstances of Axel’s birth.

On their way to the hospital on Sunday, Meyers’ wife, Alexi Ashe, who is Jewish, went into labor in the lobby of their apartment building as an Uber waited outside. Their midwife advised her to stay put, and Axel was quickly born in the lobby. Members of the New York City Fire Department came and wound up cutting the umbilical cord.

Meyers — who has a Jewish grandfather and is often mistaken to be Jewish himself (even at one point by his own in-laws) — also discussed the Strahls, who met each other at a hospital in Austria on the day they were liberated in World War II.

“When someone is born, you just have such an appreciation for everyone in your lineage who lived so that you could have this moment,” Meyers said. “So we’re just so happy to give him this name for people who obviously had to work so hard to do that.”