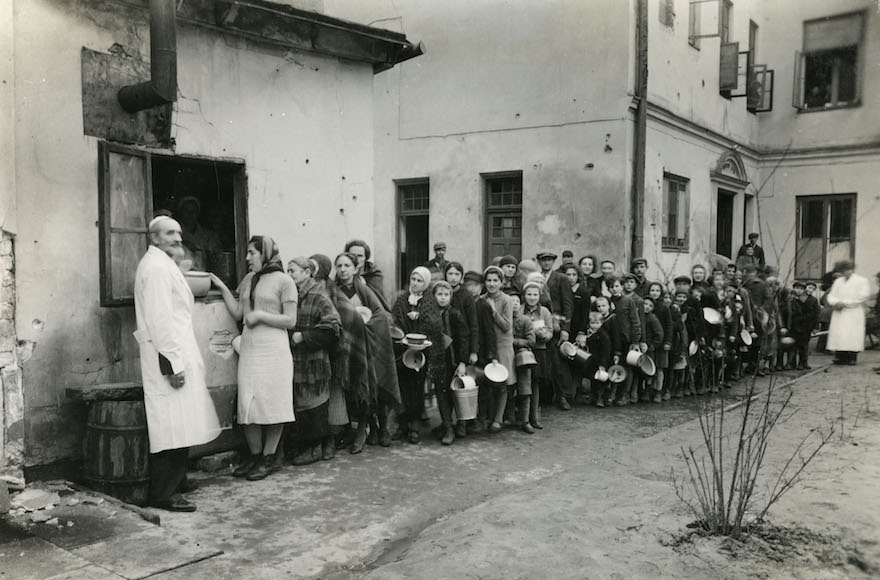 (JTA) — Remembering the Holocaust is a solemn duty that all of humanity shares. On Yom Hashoah, which starts on Wednesday evening, as we reflect on those heartwrenching events – among the darkest in human history – we should remember the heroes as well as the villains. There was pure evil, to be sure, but also courage, principle and sacrifice.

The inspiring aspects of the Shoah – like stars glittering in the darkest sky – have become clearer to me after a year leading the American Jewish Joint Distribution Committee, which rescued Jews and supported resistance during World War II. When the war ended, JDC cared for survivors in displaced persons camps. Today, JDC provides lifesaving care to over 50,000 survivors in the former Soviet Union and Eastern Europe.

I cannot say this work has changed my view of the Holocaust. The murder of millions still horrifies me beyond words, and I will never understand it. But I have learned three lessons from the Holocaust that I find motivating and even uplifting. These lessons should resonate with every Jew, even at a time when the global Jewish community is divided about many issues.

First, when lives are at stake, we should never give up. Even in the darkest times – indeed, especially in those times – we should do what we can to create a bit of light.

This point is especially resonant this year, as we commemorate the 75th anniversary of the Warsaw Ghetto Uprising, which began on April 19, 1943.

Residents of the ghetto worried that Nazi atrocities there would be hidden from the rest of the world. So they wrote testimonials and buried them in aluminum crates. The creator of this secret archive was Emanuel Ringelblum, a historian who was working in Warsaw for JDC when the Germans invaded. Although the Nazis murdered Ringelblum in 1944, others unearthed the crates after the war, preserving an eternal record of suffering and heroism in the ghetto.

The ghetto’s residents wanted not only to be remembered, but also to resist. They needed money to buy weapons. The main source of these funds was Ringelblum’s friend and mentor, Isaac Giterman, who was JDC’s director in Poland when the war broke out. When Giterman could no longer tap funds from the United States, he persuaded Polish Jews to spend hidden wealth on the uprising.

In addition to weapons, the ghetto fighters also needed a military plan. But it was hard to develop one, since the Nazis did not allow meetings in the ghetto. To circumvent this restriction, Giterman opened a soup kitchen. The military planners served the soup, allowing them to spend time together every day planning the uprising. The Nazis murdered Giterman three months before the uprising, but his courage and resourcefulness show what can be achieved even against impossible odds.

The same bravery and ingenuity animated the work of two Christian diplomats in Budapest, Carl Lutz of Switzerland and Raoul Wallenberg of Sweden. They saved over 100,000 Hungarian Jews by arranging hiding places and issuing “protective passports.” Much of their work was financed by the War Refugee Board, a U.S. government institution that received nearly all of its funding from JDC and other philanthropic sources.

Just as the Holocaust shows that evil can be resisted, even when the prospects of success seem remote, there is a second lesson as well: Jewish life can blossom again, even where indescribable atrocities once were committed. For example, nearly three decades ago my organization established the JDC-Lauder International Jewish Summer Camp in Szarvas, Hungary. Since then, Camp Szarvas has helped thousands of young Jews from across Eastern Europe and the former Soviet Union to forge strong Jewish identities and become leaders of their local Jewish communities.

The third lesson of the Holocaust is more sobering, but perhaps even more motivating: Tragically, more could have been done to rescue Jews from the Nazis, as emphasized by David Wyman, a distinguished Holocaust historian who passed away last month. For example, the United States admitted only a fraction of the refugees that our (restrictive) immigration laws would have allowed. The British barred Jews from Palestine, relenting to Arab pressure. The Allies did not bomb the tracks to concentration camps or adequately fund the War Refugee board. Some Jewish communal organizations failed to treat these issues as their highest priority.

Even if one questions whether more Jews could have been saved then, there is no question about our abilities now. If we resolve to rescue vulnerable Jews from a range of threats – anywhere in the world – a powerful Jewish state can be an ally in this effort, as can the Jewish community in North America, which is perhaps the wealthiest and most influential in the history of the Diaspora.

In other words, when the global Jewish community is united, we have the means to aid vulnerable Jews everywhere. By providing food and medicine, we can save the lives of impoverished elderly Jews in the former Soviet Union or Venezuela. By sharing expertise and resources, we can protect Jewish communities in Europe from terrorist threats. By investing in education and other innovative programs, we can bring children in Israel’s social and geographic periphery into the economic mainstream, and much more.

Indeed, JDC already pursues these goals in partnerships with the Claims Conference, the government of Israel, Jewish federations, the International Fellowship of Christians and Jews, and many others.

Today, the main issue is not whether we are able to help vulnerable Jews across the globe; it’s whether we are willing. If we fail to act on their behalf, it is because we are making a choice not to help. This is a choice we must never make.

Regardless of our political leanings or our religious denominations, we should commit together to help the vulnerable among us. This is the best way to honor the memory of those we lost during the Shoah.