My ancestors died in the Holocaust. I just found out about it. 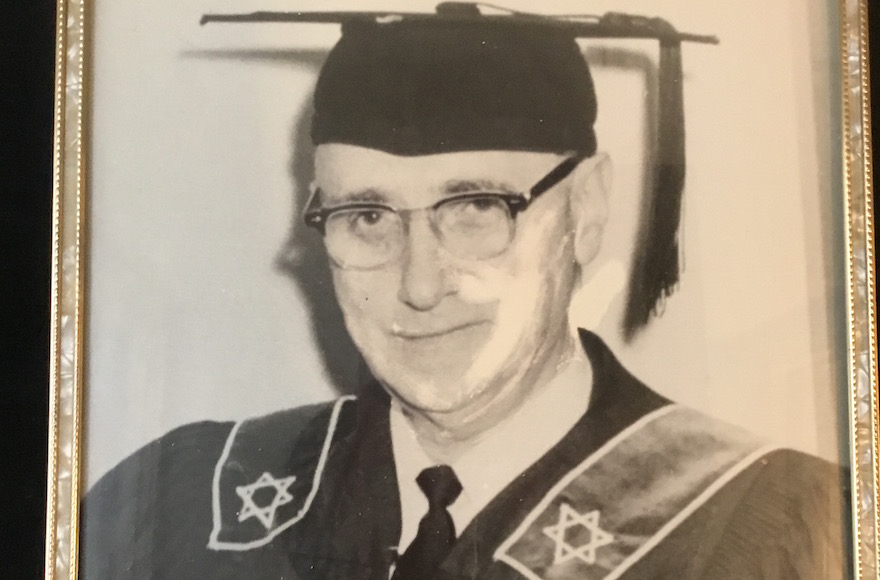 Ben Sales' great-grandfather, Abba Sales, emigrated from Eastern Europe to the United States in 1921. His parents and other relatives were killed in the Holocaust. (Courtesy of Ben Sales)
Advertisement

NEW YORK (JTA) — Last week, I learned that my direct ancestors were killed in the Holocaust.

This information, inscribed both in a Jewish book and in a letter my brother found folded into a Haggadah, changes the family history we thought we always knew.

Growing up, we were told that we were the ones who got out decades before the Nazis destroyed our family’s hometowns. My mother’s family came in the first decades of the 20th century, my father’s family a decade or so later. All of my grandparents were born in the United States, attending public schools in Boston and Chicago when Kristallnacht hit Germany’s Jews in November 1938.

When I heard old family stories, they were about going hungry and working three jobs in the Depression. They were about my paternal grandmother hiding from her Christian neighbors on Easter Sunday, or my maternal grandfather having to bootstrap his own business in the ’40s because none of the engineering firms where he applied would hire a Jew.

Our story was one of American obstacles and opportunity, not European persecution. That was something we had been lucky to escape in the age of pogroms. My grandmother told me again and again when I was a kid that everybody lost people in the Holocaust, but that our people were distant relatives — because we had all gotten out.

Holocaust remembrance was still a constant presence in my Jewish schools, camp and community — from literature to survivors’ testimonies to a high school summer visit to the death camps. But I always viewed it as a collective tragedy, not a personal one. Yes, my duty was to never forget, but it was my duty as a Jew and a moral person, not as a descendant — because we all got out.

The names of nine of my murdered relatives were inscribed in the inside cover of an old set of Mishna, the ancient Jewish legal text, that has sat in my parents’ living room for as long as I can remember. They were published by Wolf Sales, my great-great-uncle, in 1955, but because the commentary in the books was in Yiddish, none of us had ever really used them.

On Passover, on a whim, my brother cracked open one of them. The Hebrew inscription dedicated the volumes to the victims of the Holocaust. And the first two names listed were those of my great-great-grandparents, Simcha and Beila Sales.

I don’t know much about them. Had you asked me their names two weeks ago, I couldn’t have told you. I’ve heard stories about their son, my great-grandfather Abba Sales, who is my brother’s namesake, but they all concern his life after he emigrated in 1921. He and his son, my grandfather, had both died before I turned 3, and I never knew anything about his life in the Old World.

But now I know that Abba’s parents lived in the Galician Polish city of Przemyśl. After the Nazis took control of the town in 1941, they forced the city’s 24,000 Jews into a ghetto, along with other Jews from the area. Between 1942 and 1944, nearly all of these Jews were sent to concentration camps — mostly to Belzec — or were otherwise murdered. The only survivors from that branch of my family were my great-grandfather, as well as his brother’s family, who moved to America in 1939.

In the days since then, I’ve tried to find out more about Simcha and Beila, using the Yiddish spelling of our last name that I only now know. But so far it has been to no avail. They don’t show up in the databases of the Holocaust museums of the United States or Israel. Nor are they listed in a comprehensive online resource about the perished Jewish community of Przemyśl.

One Sales from Przemyśl does come up in a database — Esther Sales, who (appropriately) was a saleswoman in a fur store before she was killed. But her name doesn’t appear in the family lists we found. I called the number of the survivor in Israel who had submitted her name for documentation, only to find out that he died six years ago.

But here’s what I do know, in the words of the Mishna inscription: Simcha Sales was God-fearing and modest. Beila planted the love of Torah into her children. One of those children left in his youth and settled in Boston, where my grandfather and father were born before the family moved to Skokie, Illinois. I grew up nearby, and that is where I learned, decades later, of the family we lost. And I will keep searching.