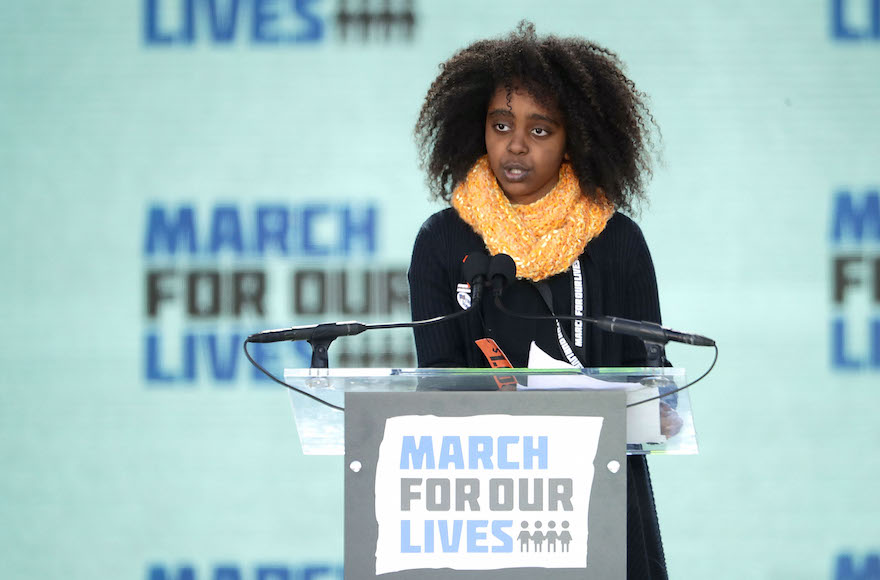 (JTA) — The 11-year-old girl whose address at a gun control march in Washington D.C. galvanized activists said she faces taunts because she is black and Jewish.

During last month’s March for Our Lives, a response to the Parkland, Florida school shooting that left 17 students and teachers dead, Naomi Wadler, who is both African American and Jewish, captured the attention of the crowd at the main march in Washington D.C. Some 800 sibling marches took place throughout the United States and around the world.

Wadler and a classmate planned an 18-minute walkout at their elementary school in Alexandria, Virginia. Seventeen minutes were for the victims of the Parkland shooting, and the last minute was for Courtlin Arrington, a 17-year-old black high school student shot and killed in an Alabama classroom days earlier.

Wadler has given interviews to several news outlets in recent days. She told Elle magazine in an April 9 interview that she has experienced discrimination both for being black and Jewish.

She said that two years ago while playing a game with a classmate, he told her she should be the slave or beggar woman because she is black. The same classmate said she could not also be Jewish because “there aren’t black people who are Jews. “