These Israeli scientists are giving new hope to kids with cancer 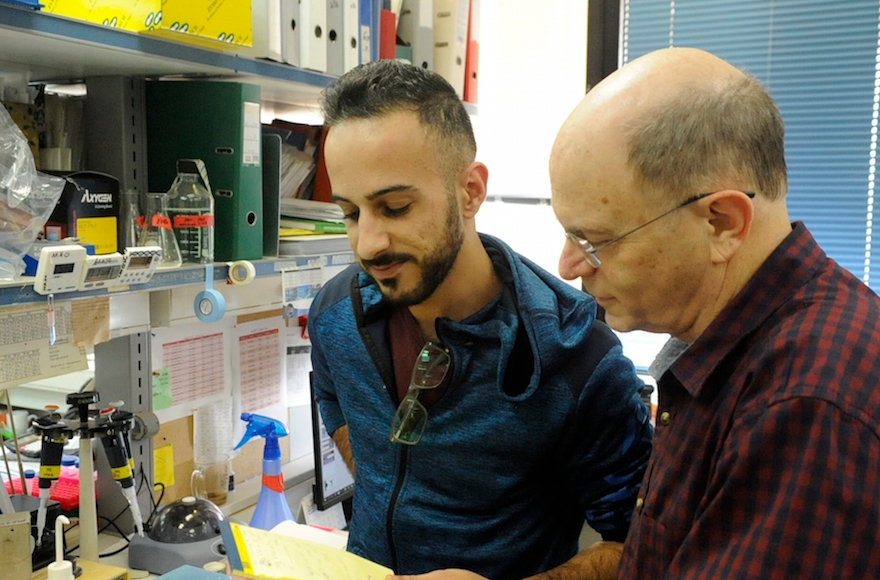 TEL AVIV — For the past four decades, geneticist Dr. Yossi Shiloh has been researching the origins of a rare, crippling childhood disease, ataxia-telangiectasia.

Children with A-T suffer frequent infections and lung problems, and are usually wheelchair-bound by the age of 10 or 12. They’re also 1,000 times more likely than healthy kids to develop cancer. The syndrome generally leads to death by the late 20s or early 30s — either from cancer or lung disease.

Though only 1 in 40,000 to 100,000 children worldwide are diagnosed with the disease, the prevalence among Sephardic Jews of Moroccan and Yemenite origin is astronomically higher: 1 in 100 have a chance at being carriers.

“There have only been a few hundred families with this disease in the history of Israel,” said Shiloh, of Tel Aviv University. “We don’t see too many patients these days because the families do pre-natal diagnosis, and parents often prefer to terminate the pregnancies of affected children.”

The pioneering pediatric cancer research these three scientists are working on is a big part of the reason Israel has become a leader in the global fight against cancer.

Several key cancer breakthroughs in recent decades had their origins in Israel. Landmark drugs to treat leukemia and bone marrow cancer were the result of groundbreaking work by Israeli scientists. Researchers in Israel have been at the forefront of uncovering the role that genetic mutations play in breast cancer.

The work these three scientists are doing now on some of the fundamental causes driving cancers is giving parents around the world reasons for hope that more effective treatments for their children may be just around the corner.

Why genetic sequencing spurred a quantum leap in cancer research

The watershed moment in modern cancer research came in 2003, according to Eden, when the completion of the Human Genome Project made it possible to compare differences between the genetic makeup of cancers and healthy genomes. That led to a large-scale, international effort to study the DNA sequence of different tumors.

“For researchers, this was a revolution because until then, we were kind of in the dark,” Eden said. “Many new mechanisms of cancer were discovered simply because we never knew they get mutated.”

Eden’s research focuses on a mutation in the SMARCB1 gene, which causes malignant rhabdoid tumor (MRT), an extremely rare pediatric tumor diagnosed in 20 to 25 U.S. babies a year. MRT generally starts in the kidneys but can also occur in other soft tissues or in the brain.

The lab Eden runs at Hebrew University’s Life Science Institute with about half a dozen research assistants experiments on mice to understand the molecular mechanisms behind the development of the mutations that lead to the tumors. The hope is that by understanding the underlying molecular processes, scientists can figure out which processes to target so that treatments can be developed to alter those mechanisms.

“For example,” Eden said, “our experiments with mice could show that if we eliminate a specific enzyme, the cancer doesn’t occur. How to translate that into a drug that inactivates such an enzyme is someone else’s job.”

Behar specializes in high-grade gliomas. Adults with these tumors typically develop them in the brain’s cortex region, which is responsible for thinking. In kids, the tumors generally show up in the brain stem, which controls breathing and alertness.

Lacking effective therapy, these gliomas can cause death within months.

“The prognosis is terrible,” Behar said.

It’s not clear why children get high-grade gliomas. It’s not a genetic disease. Neurons comprise about 30 percent of the brain’s cells and glia make up the other 70 percent. To examine the cells more closely, Behar’s team purified glia from the brain stem and cortex and then tested tumorous cells from post-mortem patients. They found that tumors originating in the brain stem proliferate much faster in the presence of brain stem glial cells than in the presence of cortex glial cells.

As with Eden’s work, the focus is on discovering what causes the tumor to develop so the process can be aborted.

“We’re utilizing these differences between the glial cells to identify the distinct factors that promote growth of the corresponding gliomas,” said Behar, whose four-person lab at Hebrew University is supported by a two-year research grant from the Israel Cancer Research Fund. “Our hope is to catch those genes that are responsible for the interaction between tumors and glia. If we can target the interaction between the glia and the tumor and basically block that interaction, we can develop treatments that will be less sensitive to the tumor.”

Shiloh, 69, stumbled upon A-T syndrome in 1977, while a graduate student in search of a doctoral thesis topic. While visiting a small village in southern Israel, he met a Moroccan Jewish family with 10 children, four of whom had the disease.

“I decided on the spot that this would be the subject of my thesis,” Shiloh recalled.

The A-T mutation causes severe neuro-motor disability and chronic lung disease. Sufferers also have a predisposition to leukemia and lymphomas and extreme sensitivity to radiation.

First described in 1926 by two Czech doctors, A-T is inherited much the same way as other genetic disorders. If both parents are carriers of the disease-causing mutation, their children each have a 25 percent risk of developing the disease. Marriage within the family clan, once common among Jews in the Middle East and North Africa, increases the risk tremendously. A-T is not uncommon among Sephardic Jews and Arabs, but it’s practically nonexistent among Ashkenazim in Israel.

After years of research, Shiloh discovered the protein that causes A-T, called ATM.

“The ATM protein turned out to have many functions,” Shiloh said. “It controls the cellular response to DNA damage caused by ionizing radiation. This protein is completely missing in A-T patients, and this explains the extreme radiosensitivity.”

The immediate benefit of Shiloh’s discovery was that it allowed, for the first time, reliable prenatal diagnosis of A-T. That led Shiloh’s lab to carry out a pilot screening program in two Arab villages in Israel’s Galilee with high A-T rates.

“If you can identify a family at risk before they have their first affected child, you can help them prevent this tragedy,” Shiloh said.

Leading a lab in Tel Aviv with 13 employees, Shiloh is a long-time grantee of the Israel Cancer Research Fund, currently in year four of a seven-year ICRF professorship grant. The long-term funding, he said, has allowed him to focus on his work.

“Unlike other sources, ICRF is very attentive and flexible to our needs,” Eden said. “With ICRF, when I want a piece of equipment that I didn’t ask for in advance, I write to them, explain what I need and why, and they will generally approve it.”

Since its founding, ICRF has distributed almost $64 million to researchers working at 24 Israeli institutions.

“Few challenges evoke a more impassioned response than cancer when it occurs in a child,” said Dr. Mark Israel, national executive director of the organization. “Harnessing the innovative and committed focus of Israeli cancer scientists to impact in a meaningful way on this problem is an effort ICRF is proud of and will expand going forward.”